Can the Bible be read both critically and religiously? 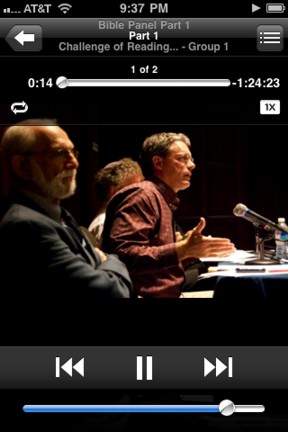 On my commute recently I listened to the audio of a panel discussion at The University of Pennsylvania on “The Challenge of Reading the Bible Today: Can the Bible be read both Critically and Religiously? Jewish, Catholic and Protestant Perspectives,” with Marc Brettler (Brandeis University) giving a Jewish perspective, Daniel J. Harrington (Boston College) giving a Catholic perspective and Peter Enns giving a protestant perspective. The audio of the panel discussion is available on Pete’s blog a time to tear down, A Time to Build Up. Pete also has made available a written copy of his opening comments here (or for direct link to pdf here).

The discussion was fascinating for many reasons. All three of the speakers have written popular level books dealing the scripture – Pete’s book Inspiration and Incarnation has been discussed here in the past. Marc Brettler wrote How to Read the Jewish Bible and Daniel Harrington How Do Catholics Read the Bible?. All three of these scholars have thought seriously about the interpretation of scripture, both religiously and critically, and all of them have thought about the importance of entering into this conversation with a general audience.  In the post today I would like to put up some ideas from Pete’s paper, some reflections of my own, and open a discussion once again.

In his comments Pete identifies three factors that figure into the Protestant difficulties with scripture. The first factor is the reformation refrain sola scriptura, scripture is seen as the foundational authority and the stakes are seen to be very high. The second factor is the conflict of the 19th and even early 20th century that set into place a social narrative that needs to be rewritten – for many even thinking about the nature of scripture critically is seen as a step toward rejection of heritage and tradition. The third factor is the nature of scripture in Christian thinking about scripture, here Pete quotes a professor of his at Harvard and reflects on the Christian view:

A few years back, one of my doctoral professors, the noted Jewish biblical scholar Jon Levenson, wrote an article on Judaism and biblical theology. In it he commented on the overarching difference between how Jews and Christians view the Bible. It struck a chord with me that still resounds. He said, “For Jews, the Bible is a problem to be solved; for Christians it is a message to be proclaimed.” This is an important distinction that helps explain why Protestants have an uneasy relationship with higher criticism. (p. 8-9)

the Bible is not there to set us on an exegetical adventure where we discover God in the problems. It is there to proclaim what God has done in Christ. (p. 9)

I highlighted this last factor because an understanding of this factor – and some serious thought about the purpose of scripture may help to point the way forward, out of what has become for many something of a serious problem. This leads to an interesting way to frame the question.

What does it mean to read the Bible religiously?

Is the Bible a book we submit to and proclaim?

Is the Bible a book we wrestle with – critically, theologically, practically – to discover God?

This middle group of Protestants—shaped by sola Scriptura and deep sociological factors—must try to create a culture where critical self-reflection is valued rather than being a threat. They must take steps to come to peace with the Bible as it is, not as it has been for their tradition.

When Protestants sing hymns in church about the Bible, it is indicative of the problem. The Bible is not the center of the Christian faith: God is. And there is more to knowing and encountering this God than carefully reading a book, even an inspired one.

I think there is much Protestants can learn from some contemplative traditions that have been part of the Roman Catholic and Eastern Orthodox traditions. Needing to get the Bible right, and fretting over whether one is getting it right, and what God thinks of us should we get it wrong, stem from spiritual and emotional dysfunction, not health; from a false and wounded self, not mature piety. Spiritual masters, not only of Christianity but of other faiths, are quick to remind us that living in your head and controlling others and God through a text hinder communion with God and spiritual  growth. It is a great Protestant irony that one’s devotion to scripture can wind up being a spiritual barrier.

The way forward may be a willingness on the part of Protestants to evaluate how well things are working and to make changes where necessary. Some might say that such a program would compromise the very Protestant spirit. I disagree. I think it calls upon the true spirit of the Reformation, but now turned inward, not simply on the enemy lurking outside of the walls. Critical self-evaluation is the first step to answering the question before us in the affirmative. The Protestant predicament, however, is that it may also be the hardest step to take. Where all this is headed is beyond me but will certainly be interesting to watch unfold.

Pete’s right, or so it seems to me, when we sing hymns in church about the bible it is indicative of the problem. I’ve posted on this before, but it bears repeating. In the reformation view authority is vested in scripture and our faith is founded on scripture. In the context of modernist thought this foundation is only secure if scripture is inerrant. If any piece of scripture is questioned and found wanting – all is open to question and we start down the slippery slope … Our belief in the historicity of the resurrection depends on the historicity of Noah  or Exodus. Many feel that no distinction is possible.

This is something of a caricature I admit, but the image I am left with is a house of cards faith.  We have a construct built by taking the pages of scripture and assembling an understanding of the faith and church.  If any page, any card, is removed the whole structure is shaky and may collapse, some would say will collapse. The foundation of faith is Scripture – but more than this, the foundation of faith is every jot and tittle of scripture.

We need to realize that our faith is founded on God alone. God is the center of our faith. The rock on which we stand is God alone – and his work in this world, including the atoning work of Christ. Scripture illuminates God, his nature and his interaction with his creation. It does this through a variety of forms including the failings and struggles of his people as they wrestle with truth. The purpose is not to provide the right answers for a rather tricky multiple choice exam.  If scripture provides answers for a test, the test is an always changing open-ended essay test with practicum. To meet this kind of challenge we need to enter into dialog with the text we have, and wrestle with the whole text – the easy passages and the hard ones.  After all, the call is to discipleship not book knowledge.

In this view of scripture as lamp our questions about scripture do not shake the foundation. The idea that the story of Gen 3 tells important theological truths in mythic form; the suggestion that the story of the exodus from Egypt may (likely does) have elements that are not exactly historical in the modern sense of literal – factual reporting, even the redaction of Matthew and the authorship of 2 Timothy, the way Jesus, Paul, and the NT writers use the OT, wrestle with the OT to gain theological insight  … these are ideas, questions, suggestions that we can consider and discuss without fear, but with reverence.

In this view we require that scripture be reliable  (the lamp must give off light),  but we can use modern biblical scholarship and the study of archaeology with discernment and prayer to help us better understand the text and the message. Ancient Near East studies identify elements of ancient science and cosmology in the text. This helps to put a perspective on the nature of the text and the relationship of the text to the culture in which it was written. We can also allow scientific discovery to inform our understanding of scripture including the relationship between our physical bodies and such ideas as sin. We need to wrestle with the text.

It is also important to realize that the church is on the rock, but it is not the rock on which we stand. Our traditions are not foundational but paths blazed before us on the rock.  This includes Protestant traditions and ironically Protestants are in many ways worse here than Catholics.  No confession or statement nailed the truth. Every tradition Catholic, Orthodox, and Protestant has gotten something wrong, often many things. Sometimes errors are the result of sin (pride, arrogance, racism, …) but more often the errors arise from sincere wrestling in possession of incomplete knowledge and understanding (true of all of us today as well).  We do well to take seriously the wrestlings and conclusions of those who have gone before us and those who stand alongside us, but we also do well to consider when and where and why the church has and does go astray.

Back to the The Challenge of Reading the Bible Today. The whole panel, including the comments by Marc Brettler and Daniel Harrington as well as the Q&A with the audience are well worth listening to and considering. Insights from many perspectives can help us see more clearly. So what do you think?

Is the Bible a book we wrestle with – critically, theologically, practically – to discover God?

How do the fields of  biblical studies, science, and history play a role in the understanding of the text?

If you have comments please visit Can the Bible be read both critically and religiously? at Jesus Creed