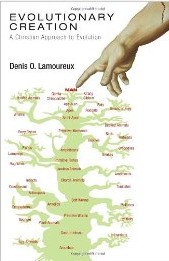 We’ve been working through  Denis O. Lamoureux’s book Evolutionary Creation: A Christian Approach to Evolution – a book that describes a way to move beyond the creation and evolutions debates.  In the posts today and Thursday we will look at the third chapter of the book. This chapter, The Creator in a Designed and Evolving Universe, is rather long, covering a number of interesting topics – the question of divine action in creation, intelligent design in creation, and the anthropic principle.  I am not going to discuss the anthropic principle – we’ve discussed it a number of times in the past – most notably in a long series on Alister McGrath’s book “A Fine Tuned Universe.”  Instead I would like to concentrate on some ideas developed in the book related to divine action (today) and intelligent design (Thursday). It should be exciting.

Dr. Lamoureux discusses four categories of divine action: personal interventionism where God interacts specifically in individual lives – healings, revelation etc., personal providentialism which Lamoureux describes as “God’s subtle and indirect activity in relationships with men and women“(p. 55) , cosmic interventionism where God interacts specifically in the past – origin of the universe, origin of life, origin of humans etc. or in the present, and cosmic providentialism – “God’s subtle and indirect activity in the origin and operation of the universe and life. It is His working through routine and uninterrupted natural processes that He ordains and sustains.“(p. 55).

These four categories of divine action help to define the approaches that many Christians take to issues of science and faith. Most Christians see providential divine action on both a personal and cosmic scale, although some will question personal providentialism, seeing little evidence that God concerns himself with individual Christians.

This leads to the question I would like to consider today.

How do you view divine action in the world?

How does your understanding of scripture or of science impact your view of divine action?

Dr. Lamoureux includes a good discussion of divine action and the impact and pitfalls of God-of-the-gap type reasoning. He uses the following table to summarize, drawing distinctions between the way various groups view the questions of divine origin and creation:

He summarizes the impact of these views in terms of assumptions about scripture:

Young earth creationists and progressive creationists believe that God intervened dramatically to create life, reflecting ultimately their acceptance of scientific concordism. But evolutionary creationists are not tied to this interpretive assumption of Scripture, and thus are not forced to embrace cosmological interventionism in origins. (p. 58)

Dr. Lamoureux allows that gaps could exist in creation, indicating divine action by intervention, but a look at the history of gap arguments shows that the gaps proposed have consistently closed and there is no reason to expect that any of the remaining gaps are insurmountable. He suggests that the reason for expecting to find gaps is based in a specific approach to scripture:

Of course, the central factor supporting the God-of the-gaps is the assumption of scientific concordism. Genesis 1 states ten times that living organisms were created “according to their/its kinds.” Consequently anti-evolutionists need to find discontinuities in the continuum of life in order to define these basic groupings. (p. 62)

And with respect to evolutionary creation:

To summarize, evolutionary creationists claim that God is active in the world in a variety of ways. As a loving father He reserves direct and dramatic interventions for personal relationships in order to admonish, call, and encourage us. The Lord also acts in subtle providentialistic ways with men and women. As the Ordainer and Sustainer of the cosmos, the creator did not intervene in origins nor does He act dramatically in its operations. This is not to assert that it is outside his power, but rather to state that this is His will. Thus evolutionary creation is not deism. In addition this Christian view of origins rejects the God-of-the-gaps. Liberated from the assumption of scientific concordism and cosmological interventionism in origins that this interpretive approach dictates, evolutionary creationists read the Book of Nature unencumbered in its God-glorifying splendor and purity. (p. 62)

Let me elaborate a bit.

I think that God created through evolutionary processes. I see no reason to doubt the evidence we see for evolution. I see no reason to suppose a priori that there must be gaps in creation that provide empirical scientific evidence for divine action in the origin of the universe or the origin of life. I don’t think that we should expect scientific concordance between the creation accounts in Genesis and the formation of the universe or the development of life.

I think it is perfectly reasonable to expect that God acted in creation through his natural processes as Ordainer and Sustainer. I see no reason to look for gaps that only God could fill. In fact, I doubt that any will ever be identified that are not in essence time-limited gaps in knowledge.

But, and this is the big caveat, I also see no reason to state as an a priori commitment that God did not intervene in origins, nor do I see any reason for the rather arrogant idea that we now understand the Will of God well enough to assert categorically that he would not have intervened in the origin of the universe or the origin of life.  I expect that the ultimate conclusion will be that God created through evolutionary means, including in the origin of life.  But we certainly do not, as of yet at least, know by observation and empirical reason that He did not intervene more directly.

We need to retain a humility in our pronouncements and in our approach to understanding. To make a categorical statement about what God did or did not, would or would not do, outside of the realm of evidence is, at its heart, a metaphysical statement no more justifiable than the statement that God must have intervened and left evidence of his intervention. To make the categorical statement (however right we think the conclusion might be) is to fall into the trap the church has fallen into so many times in the past – to think we have finally reached the truth and understand God.

And – big concern – to make such a concrete and absolute statement raises the bar for Christians considering, but not convinced of, the reasonableness of evolutionary creation. To overstate the case and make this kind of rigid statement is to draw a totally unnecessary line in the sand.

Bottom line – no a priori commitment to intervention in origins, no a priori commitment against intervention in origins. We go with the evidence wherever it may lead. And wherever it leads – God did it. He ordains all. He sustains all. At times, especially in relationship with his people, he intervenes in a more direct fashion. Here I will stake my flag. If this means that my position is not evolutionary creation – so be it. The term introduced by Francis Collins, biologos, is not likely to catch on, but perhaps it is a better descriptor. God spoke life into being.  To determine the means and methods used we look to the evidence.

What do you think?  Agree or Disagree?

How definitive should we be in our discussion of divine action in origins?

And a related sub-question

Does our understanding of the nature of God – our theology – point one direction or the other?  How firm is your conclusion here?