We’ve been working through Denis O. Lamoureux’s book Evolutionary Creation: A Christian Approach to Evolution – a book that describes a way to move beyond the creation and evolutions debates. Chapter 4 of this book describes the role that ancient science plays in the text of scripture. The post on Tuesday looked at the general topic and specifically at the presence of an ancient view of astronomy, geology, and cosmology in the text. The ancient understanding of biology and reproduction is also embedded in the text. In the post today I would like to outline some aspects of the ancient Near East (ANE) view of biology, its presence in the text of scripture, and finish up with a brief discussion of Dr. Lamoureux’s approach to the presence of ANE science in scripture.

The ancient understanding of biology is apparent in such well know texts as Lev. 11:5-6 where the coney or hyrax (right) and rabbit are classified as cud-chewing animals:

This is interesting – and leads to some questions.

Does the presence of ANE biology in the text of scripture pose a more serious problem than ANE geography or astronomy?

The ANE view of reproduction, including human reproduction, was viewed as males as sowing seed into a receptacle – the womb of the female – where the seed then grew. Lineage passed through the male line because the essence of being came from the male, not the female. The idea of egg and sperm combining to produce a child with equal contributions from mother and father was not in the picture. Dr. Lamoureux quotes from Aeschylus (5th cent. BC):

“The mother is no parent of that which is called her child, but only the nurse of the new-planted seed that grows. The parent is he who mounts. She preserves a stranger’s seed if no God interferes.” The ancients believed that an entire miniature human being was tightly packed within a man’s “seed.” Historically, this notion persisted as late as the seventeenth century even after the invention of the first microscopes. (p. 139)

This image is found throughout scripture as well – most notably in the language that it used to refer to the problems of infertility. The language is the language of agriculture. Women are barren – as a field is barren – when it is not possible for seed to grow in the womb. This idea also relates, I expect, to the ethics and rationale behind practice of giving a handmaiden as a surrogate when a wife could not bear a child.

The image of a one-seed notion of reproduction is implicit in Hebrew 7:4-10

Just think how great he was: Even the patriarch Abraham gave him a tenth of the plunder! Now the law requires the descendants of Levi who become priests to collect a tenth from the people—that is, from their fellow Israelites—even though they also are descended from Abraham. This man, however, did not trace his descent from Levi, yet he collected a tenth from Abraham and blessed him who had the promises. And without doubt the lesser is blessed by the greater. In the one case, the tenth is collected by people who die; but in the other case, by him who is declared to be living. One might even say that Levi, who collects the tenth, paid the tenth through Abraham, because when Melchizedek met Abraham, Levi was still in the body of his ancestor.

The presence of ANE biology in the text of the bible provides another interesting place where it is likely that we often impose our understanding of science on the text and fail to read what is written as it would have been intended by the authors and understood by the original audience. The original meaning of the text blows past us and we assume, because of our context and current knowledge, that the terms are figurative and were also considered figurative 2000 or 3000 years ago.

Where do we go from here? If we expect scientific concordance between the text of scripture and our present understanding of cosmology, geography, biology, reproduction, and more we have two choices – we can search for reasons why the language doesn’t carry the apparent meaning, the meaning that fits in context with noncanonical texts and other sources, or we can dismiss scripture as an ancient, errant, and purely human document. Many, of course, take the first approach – looking at the language as phenomenological or as figurative and poetic.

Phenomenological Language: John Calvin took this approach in his Genesis commentary, noting that God accommodated himself to human perspective using phenomenological language. (Although Calvin was not willing to admit that Moses was also mistaken and left in his error.):

Nor did Moses truly wish to withdraw us from this pursuit in omitting such things as are peculiar to the art; but because he was ordained a teacher as well of the unlearned and rude as of the learned, he could not otherwise fulfill his office than by descending to this grosser method of instruction. … If the astronomer inquires respecting the actual dimensions of the stars, he will find the moon to be less than Saturn; but this is something abstruse, for to the sight it appears differently. Moses, therefore, rather adapts his discourse to common usage. (Commentary on Genesis Vol. 1)

The same reasoning can be used for cud chewing rabbits and that bird, the bat. However, it is important to note that the authors of the text, contra Calvin, did not realize that their “science” was mistaken. The  descriptions are phenomenological because the understanding in the ANE cultures was phenomenological.  To author and original audience the rising and setting sun was both phenomenological and true, while we use the phenomenological language knowing (at least most of us) that the earth moves around the sun giving rise to the appearance of rising and setting, they did not.  It seems obvious that God accommodated his message to human perspective on issues that were of no real significance to the overall message.

Poetic or Figurative Language: At other times many will argue that the language was never intended to have a real referent, especially when the phenomenological explanation seems inappropriate. The vault of Genesis 1 was always intended as figurative; the pillars of the earth in was merely a poetic literary device for Job when he spoke of the power of God:

Then Job replied: “Indeed, I know that this is true.  But how can mere mortals prove their innocence before God? … He shakes the earth from its place and makes its pillars tremble. He speaks to the sun and it does not shine;

We praise you, God, we praise you, for your Name is near; people tell of your wonderful deeds. You say, “I choose the appointed time; it is I who judge with equity. When the earth and all its people quake, it is I who hold its pillars firm.

As we learn more of the ANE context and culture it is hard to hold this line however. It seems clear that scripture uses same understandings of cosmology and biology as the surrounding culture. The text reflects real assumptions about the world and the universe.

It is also apparent that this cultural context is not the same in all parts of scripture,  as it was not in every time and place where the various books and passages of the bible were composed, assembled, and edited. At times, for example, the earth is depicted as supported, not by pillars but by water. Dr. Lamoureux points us to Psalm 24:2 and 136:6

The earth is the LORD’s, and everything in it, the world, and all who live in it;for he founded it on the seas and established it on the waters. (Psalm 24)

Again it appears that God accommodates his message to the local culture and context on issues that are of no importance to the theological point. Of course this isn’t entirely consistent throughout the text, because the text comes from different times and contexts. 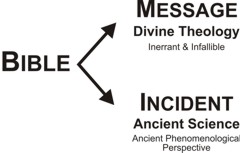 Message-Incident Principle: Dr. Lamoureux introduces the message-incident principle to guide interpretation of passages that refer to the physical world and to help Christians think through the impact of ANE science in the text. This approach acknowledges ANE science and phenomenological language, yet suggests that it is the theological content, not the scientific content, that is the significant content of the text.

This approach contends that in order to reveal spiritual truths as effectively as possible to the ancient peoples, the Holy Spirit used their ancient phenomenological perspective of nature. That is, instead of confusing or distracting the biblical writers and their readers with modern scientific concepts, God descended to their level and employed the science-of-the-day. … According to this interpretative principle, biblical inerrancy and infallibility rest in the Divine Theology, and not in statements referring to nature.  Qualifying ancient science as “incidental” does not imply that it is unimportant. The science in Scripture is vital for transporting spiritual truths.  … In other words, the ancient science in Scripture is “alongside” the “more important” Message of Faith. (pp. 110-111)

Does the message-incident principle, the idea that the science is merely the incident, the vessel, carrying the message make sense?

Is this a reasonable approach to the inspiration and inerrancy of Scripture?

It you wish to contact me directly you may do so at rjs4mail[at]att.net