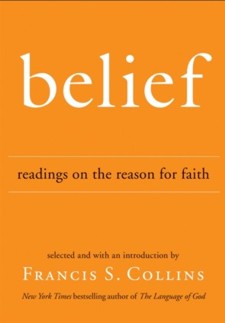 Francis Collins, in the brief stretch between stints as head of the Human Genome Project at NIH and, now, Director of NIH, put together a book, Belief: Readings on the Reason for Faith, an anthology of readings he finds helpful in discussing rational reasons for belief in God. The anthology is, in some sense, a supplement to his book The Language of God. The essays  and excerpts in this book will not provide a proof for the existence of God – no such proof is possible. But they do provide arguments and reasons for belief.

The first essay in this anthology is by Tom Wright, an excerpt from his book Simply Christian. Wright sketches a view of human longing and what this should teach us about God and about the nature of the world in which we live. He concentrates on two universal features of human experience across cultures and throughout time – the longing for justice and the depth of spirituality. These two features, elaborated below, are signposts pointing toward God.

What features of human experience point to God?

Is human experience a reliable signpost?

First, there is a human longing for justice … yet we cannot fix injustice. Not only that but we find ourselves complicit in injustice.

And yet we have a sense that justice itself slips through our fingers. Sometimes it works; often it doesn’t. Innocent people get convicted; guilty people are let off. The bullies, and those who can bribe their way out of trouble, get away with wrongdoing – not always, but often enough for us to notice, and to wonder why. (p. 4-5)

We want, many of us at least, to set the world to rights … yet we can’t. Racism, war, genocide, greed, gluttony, pride. We can’t make a dent. The world is unfair. Some things we can do nothing about, and can’t even attribute to human evil. A tsunami can kill more than 200,000 people and we realize … 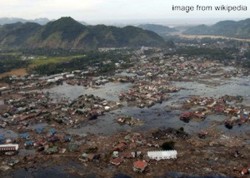 There are some things in our world, on our planet, which make us say, “That’s not right!” even when there’s nobody to blame. A tectonic plate’s got to do what a tectonic plate’s got to do. The earthquake wasn’t caused by some wicked global capitalist, by a late-blossoming Marxist, or by a fundamentalist with a bomb. It just happened. And in that happening we see a world in pain, a world out of joint, a world where things occur that we seem powerless to make right. (p. 5)

Is our yearning for justice a pipe dream? Is it a “projection of childish fantasies”?  Perhaps the yearning for justice is an idealism we outgrow as we learn to live, and perhaps to flourish, in the world as it is, where we grab what we can get and then we die. Wright suggests that it is more than a childish fantasy. We know something is wrong, and this knowledge points us to something beyond our current experience.

Or we can say, if we like, that the reason we have these dreams, the reason we have a sense of memory of the echo of a voice, is that there is someone speaking to us, whispering in our inner ear – someone who cares very much about this present world and our present selves, and who has made us and the world for a purpose that will indeed involve justice, things being put to rights, ourselves being put to rights, the world being rescued at last. (p. 8-9)

This yearning for justice, Wright claims, points to God.

The yearning for spirituality is another signpost in our collective human experience. There is a universal experience of something profound and deep, something beyond the merely material day-to-day life. A spiritual reality is a feature of human existence. The Western world of thought – enlightenment intellectualism – has tried to suppress this aspect of human existence.  Wright presents a parable – a parable of a benevolent dictator who paved a country to control the availability of water, to ensure that there would be no floods and all water would be pure and wholesome. Yet the water could not, ultimately be contained and burst through the layer of concrete.

We in the Western world are citizens of that country. The dictator is the philosophy that has shaped our world for the past two or more centuries, making most people materialist by default. And the water is what we today call “spirituality,” the hidden spring that bubbles up within human hearts and human societies. (p. 10)

Many millions have bought into the materialism, many millions, aware of the yearnings, have tapped into it in controlled and allowed ways, many more have thirsted after something they did not understand.  Wright notes that this transformation was more complete in Western Europe than in North America. Yet it is also at play in North America, and most completely in our secular Universities and intellectual, academic, societies. The pressures to cap the hidden spring is at work here as it is in Western Europe.  But this is not true of the entire world – Africa, South America, Asia. The growth of the church in the rest of the world is a contrast to the “concrete covered” intellectual landscape of the West.

Wright suggests that the deep spiritual experiences, common to mankind, are significant and cannot be suppressed. He points to the renewed interest in Celtic spiritualism in his part of the world. The pull of Celtic Christianity is the deep spirituality and connection with God and with the world.

It seems to speak of a haunting possibility of another world, a world in which God (whoever he may be) is more directly present, a world in which humans get along better with their natural environment, a world with roots far deeper, and a hidden music far richer, than the shrill and shallow world of modern technology, soap operas, and football managers. (p. 14-15)

The contemporary quest for spirituality is either a dangerous and counterproductive search, a necessary delusion to make meaningless material life bearable to promote effective self-reproduction, or a signpost to the fact that there is someone or something out there that transcends our mundane material existence. It is interesting in this context to refer back to Elaine Ecklund’s study of American scientists, professors at “elite” institutions (see this post in particular). Ecklund found that of those who do not belong to a faith tradition a substantial percentage (20% or so of the total cohort of scientists surveyed) are spiritual at some level, and this includes atheists and agnostics. Spirituality is not going away.

… we return to the possibility that the widespread hunger for spirituality, which has been reported in various ways across the whole of human experience, is a genuine signpost to something that remains just around the corner, out of sight. It may be the echo of a voice – a voice that is calling, not so loudly as to compel us to listen whether we choose to or not, but not so quietly as to be drowned out altogether by the noises going on in our heads and our world. (p. 18)

A passion for justice and  a deep hunger for spirituality … Wright sees these as signposts, universal in human experience, pointing us to God, setting up a reason for a continued search for his truth and purpose. It is worth, he suggests, listening for further echoes of the same voice, searching for the deeper reality and mission hinted at by the voice of these desires.

What do you think – Is Wright on to something here?

Does our passion for justice and hunger for spirituality point us to God?