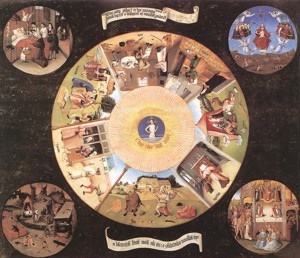 We’re in the middle of a nice series of posts with brief meditations by Jeff Cook from his book Seven: The Deadly Sins and the Beatitudes. The first meditation on envy started me thinking, and I would like to put up some of these thoughts and start a conversation on the concept of ambition and the view of ambition as a virtue.

The Merriam-Webster dictionary online defines ambition as (a) an ardent desire for rank, fame, or power (b) desire to achieve a particular end. This is viewed as a virtue in much of our culture – certainly in academia.

But is ambition a virtue? Should it be viewed as a virtue from a Christian perspective?

What role does ambition play in our church? What role should it play?

I’m skeptical. It seems to me that ambition is playing with fire. It is not inherently negative, in fact it is good to have goals and to work for those goals with perseverance. But ambition uses people, destroys relationships, and destroys community. Ambition is intimately coupled with envy, pride, and perhaps greed. We are fully embodied creatures and ambition feeds on our chemistry and biology and it shapes our natural responses, it  is addictive.

I’ll go one step further. Ambition, although not always clearly recognized and acknowledged as such, wreaks havoc in the church. Sexual sin, despite the attention payed to it, is of less significance if we consider impact on community and pain caused. The difference in impact is primarily because we recognize sexual sin as sin – there are consequences. In contrast we often value and reward the  result of ambition. We brush under the rug or rationalize away its impetus in envy and pride. This is a spiritual problem and a physical problem.

We are, I believe, fully embodied souls. Sin is a product of mind and will, but it is a fully embodied mind. I’ve posted on the embodied nature of sin before and borrow from those posts to start this discussion. You can find the original posts through the Science and Faith Archive on the sidebar. This is background and necessary insight into the direction I would like to consider thinking about ambition. And yes, it is related to science.

Scientific developments have impact on our understanding of human behavior and human response. There was an article, Seven Deadly Sins, in the September 2009 issue of Discover Magazine that posed the question “Why does being bad feel so good?” and describes research being done these days to explore the science of sin. Scientists are using techniques such as  functional magnetic resonance imaging (fMRI) and PET (positron-emission tomography) to map the active areas of the brain as a subject responds to certain stimuli.

Lust is a big one – Research into brain response connected with lust indicates that (in males at least) the response is all-encompassing. “All said, the most notable thing about lust is that it sets nearly the whole brain buzzing.“  The signals are unique, distinctive, unmistakable and uncontrollable. This isn’t surprising. We know that lust is a problem, we know that behavior can shape response, that there is a biological and chemical aspect that shapes not only the present, but the future. The biochemical response can be addicting and destructive. The lure of pornography is an excellent case in point. We could go on here, but this isn’t really the point of today’s post.

Envy is interesting – in a study of envy a number of volunteers were observed using fMRI while they read one of three scenarios – the key one described a student similar to the volunteer, but better in every respect.  The conflict detecting regions of the brain fired and the response was similar to that for pain. This leads to the suggestion that envy is a kind of social pain.  Later, when reading about this student’s downfall, the reward and pleasure  regions of the volunteer’s brain fired.  Not only this but the greater the pain in reading about the student’s success, the greater the reward in reading of the student’s downfall.  The reward response is along the same line as that experienced from food – or sex. It feels good.

And now the queen of vices – Pride. Gregory the Great in commenting on Job noted (p. 489-490): “For when pride, the queen of sins, has fully possessed a conquered heart, she surrenders is immediately to seven principal sins, as if to some of her generals, to lay it waste. … For pride is the root of all evil, of which it is said, as Scripture bears witness; Pride is the beginning of all sin.“

Does pride show response in brain scans? The science here is rather interesting.

For most of us, it takes less mental energy to puff ourselves up than to think critically about our own abilities. … volunteers who imagined themselves winning a prize or trouncing an opponent showed less activation in brain regions associated with introspection and self-conscious thought than people induced to feel negative emotions such as embarrassment. We accept positive feelings about ourselves readily, Takahashi says: “Compared with guilt and embarrassment, pride might be processed more automatically”. (p. 51)

In another experiment a part of the brain could be stimulated to turn off the protective influence of pride.  When this happened “they saw themselves as they really were, without glossing over negative characteristics.” (p. 51)

Even more interesting, the experiments demonstrate that righteous humility, deliberate self depreciation, is but arrogance and pride in disguise. The brain activation is the same. “Both are forms of one-upsmanship. ‘They are in the same location and seem to serve the same purpose: putting oneself ahead in society.‘” (p. 51)

What does this mean? Self confidence, ambition, pride, envy – this is a slippery slope.  It is insidious – affecting our very make-up inside out. We are wrong when we cast it “simply” as a battle of wills. And our capacity for denial, blame-shifting, and self-deception is also rooted in our make-up.  It is interesting though, because studies also show that we can train our brains and influence response – especially true of sins of envy, wrath, and pride. Feeding ambition, with its corollaries of envy and pride, is like feeding lust. It changes our very being, our function, our chemistry, our brain paths. On the other hand intentional pursuit of virtue is also self reinforcing.

So why is it playing with fire? …  an example and an application. I’ll give the only safe example – one arising from self-reflection. I’ve been watching with interest the discussion on Rob Bell’s new book. Scot has posted on this from a number of different angles. The response has been amazing. This has raised more impassioned response than any other topic on the blog over the last six years. More than women in ministry, evolution, or Brian McLaren. Wow.

The example here, though, is not the response of everyone else in this discussion – the example is in my response to this firestorm.  As I watched the response to Scot’s posts on Bell’s book, the comments and the attention, I would have to say that envy and pride influenced my reaction. After all, the “success” (however defined) of others diminishes my own influence and accomplishment. The question immediately arises – how can I capitalize on the firestorm and enhance my own influence and reputation? No, it isn’t put so baldly as that – but as I think about embodied response this certainly plays a role. There is an intoxicating aspect to knowing that at least some people read what I write and appreciate it. It is physical and chemical – not “just” emotional. As a result there is a natural embodied response to try to maximize that feeling of influence and importance.

This current post arose from my contemplation of my response, how much it surprised me, and consideration of my ultimate purpose in writing on Scot’s blog. I could tailor my writing – even staying within the science and faith discussion – to build a following. I could be confrontational and provocative. I could design posts and choose topics to build a large following. I could justify it in a deluded way as working for God’s kingdom. It certainly happens all the time in the creation-evolution discussion.

It happens all the time in our church more broadly. The goal becomes influence and power hidden behind a veneer of righteous humility.

Thinking about it brings me to my knees. Lord, help me stay focused on the goal, the edification of the church and the kingdom of God. … And may they forget the channel, seeing only Him.

Don’t get me wrong. I think the issue of hell and judgment is a pressing question in our church and I admire the way that Scot has approached and engaged the issue. If I have something I feel led to contribute I will, and I did in my post on Polkinghorne on a Destiny beyond Death. The response doesn’t negate the value,  it just increases the need for reflection, caution, and prayer.

This reflection leads me though, to an idea that I would like to pose for consideration. Within the American evangelical church we view ambition as a virtue. We condone ambition, we reward ambition, we cultivate ambition, we admire ambition, we feed ambition. And this is a serious problem.

In fact, I think it is one of the biggest and most destructive temptations active in our church today. Ambition, accompanied by, and inextricably intertwined with, pride and envy.

What role does ambition play in our church? What role should it play?

How do we guard against pride and envy and stay focused on Christ?

If you have comments please visit Ambition … Virtue or Vice? at Jesus Creed.