Are the Laws of Nature Free? 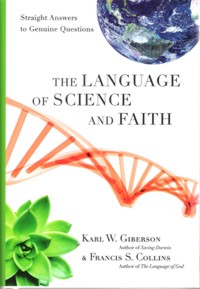 I recently received, compliments of the publisher, a copy of a new book by Karl Giberson and Francis Collins The Language of Science and Faith: Straight Answers to Genuine Questions. This book has its origins in the avalanche of questions unleashed on Collins following the publication of his earlier book The Language of God. But this new book is not an encyclopedia of frequently asked questions – it is a readable book walking through many of the frequently asked questions and the important issues in a narrative form. It is written for the non-scientist and will make a good resource for those with questions, for discussion groups, and for church leaders.

In chapter four The Language of Science and Faith addresses the question Can Scientific and Scriptural Truth be Reconciled? The chapter covers a number of points and concludes with a discussion of the role for God and the laws of nature. Do the laws of nature eliminate any room for divine action within nature? Are the two choices nature (within the laws) or God actively interfering in supernatural miraculous fashion?

In the wake of Newton’s work, Christians found it increasingly hard to understand how God could take an active role in the universe without upsetting the natural course of events. Furthermore, the natural phenomena explained by Newton seemed to be entirely deterministic, with no flexibility or wiggle room of any sort. The world seemed to be without any inherent freedom, which posed questions about human freedom as well. Freedom could only exist in a world where the laws of nature were somehow open or flexible. (p. 117)

As Laplace famously replied to Napoleon when asked how he could write a book about the universe with out mentioning its creator “I had no need of that hypothesis.”

How does God interact with creation?

Is there an intrinsic openness in creation – a freedom for human and divine action?

The universe is not the deterministic entity imagined by Newton and Laplace. There is, in fact, an inherent uncertainty and openness in nature. This openness is reflected fundamentally at the level of quantum phenomena and is an ontological property of matter. We can describe very accurately the probability that an event will occur, but we can not predict with certainty.

When ultraviolet light impinges on a DNA molecule it will be absorbed with a certain probability. Once the light is absorbed several different things can happen – including reactions that lead to damage and mutation. But we cannot determine in any given molecule at any given time what will happen.

When a radioactive element decays it will do so with a well known and understood half-life. We know that carbon-14 has a half life of 5730 years – but any given atom may decay today or in 15000 years, it is entirely open and unpredictable.

Science has also demonstrated that there are natural phenomena that are exquisitely sensitive to  initial conditions. Such so-called “chaotic” systems include the earth’s weather. There are patterns and constraints. But long term weather forecasting is not going to happen.

Chaos and quantum uncertainty make it impossible to see the world any longer as determined. The future no longer appears to be the simple extrapolation of the present, and complete knowledge of the present would  not be enough to predict the future. The world now seems free in ways that seem similar to how we are free. (p. 118)

There are laws and there is orderliness – but within the orderliness and the laws there is room for openness and freedom, and there is room for agency.  John Polkinghorne makes a similar argument suggesting that science has not demonstrated the causal closure of the world and that there  is room for divine action in nature without violating the laws of nature (among other places see his lecture on Providence and Prayer). God can act providentially in the world through and within the laws of nature. We will not distinguish this from nature without a revelation from or a relationship with God. He chooses to relate to his creation and to human beings.

And this leads us to the idea of agency. If there is room for the agency of God, human agency is not a stretch.  When you decide to raise your arm that decision arises in a fashion we do not understand, and your arm moves, the material world changes. The ideas of human agency and divine agency are related.

God’s interaction with the world is deeply mysterious, of course, and nobody has ever produced any sort of picture for how we might think about this. But we hasten to point out – and this is very significant – we also do not understand human action in the world. … These human intentions emerge from our minds, somehow, via processes we don’t understand. And then we rearrange the world around us to make these intentions a reality; we make things happen that would not otherwise occur, but we do this without “breaking the laws of nature.” (p. 119)

But this idea of agency itself is controversial in part because we do not understand it at all from a scientific point of view.

Free will and human agency. Scot clipped a brief excerpt from a New York Times article yesterday afternoon.  This article addressed the issue of free will, considering the role that belief in a free will plays in human behavior and moral choices. As the article notes idea that free will is a fiction, a useful delusion, is a fairly common and accepted position in some scientific circles.  I posted last May (Is Free Will Anti-science?) on an article  in The Proceedings of the National Academy of Science (here) where Anthony Cashmore asserts:

This is a pretty extreme statement. The laws of nature are uniform throughout. This is a blanket statement but as far as we can tell a true one. There is no evidence for changing laws of nature. Cashmore admits that there is inherent uncertainty in nature but points out that it is quite a leap from openness to agency. Free will is not really randomness within constrained regions of probability. From the point of view of many scientists even your thoughts are mere probabilistic events, with the probability of any given thought determined by the prior course of the universe and your particular history and environment. But still, the idea that these laws require or prove causal closure of the world and eliminate the possibility of free will is an open question. To state that they do is a metaphysical imposition, not a deduction from the data.

The article in the New York Times concludes:

Some scientists like to dismiss the intuitive belief in free will as an exercise in self-delusion — a simple-minded bit of “confabulation,” as Crick put it. But these supposed experts are deluding themselves if they think the question has been resolved. Free will hasn’t been disproved scientifically or philosophically. The more that researchers investigate free will, the more good reasons there are to believe in it.

Concluding thoughts. This post is something of a ramble through a range of ideas – but it leads me to several questions I find worth discussion. I think that there is an inherent openness in nature because God created a universe with this openness and creative potential. He interacts with creation providentially and at times, for a purpose in relationship with his creatures, miraculously. But miracles, steps outside of his natural creation, are only required in the context of relationship.

Is there room for openness in our view of the world – from either a scientific or a theological perspective?

How do we think about the agency of God in the world?

Is agency – human free will – a delusion or a reality?

Is there a conflict here between science and Christian faith?

If you have comments please visit Are the Laws of Nature Free? at Jesus Creed.

This entry was posted in Science and Faith and tagged Francis Collins, John C. Polkinghorne. Bookmark the permalink.
%d bloggers like this: