Throwing the Bible Under the Bus?

Dr. Mohler, president of Southern Baptist Seminary in Louisville, Kentucky wrote two posts on his blog lately dealing with the interface between science and faith. I would like to interact with some of the content of these posts today. The first post, dated April 14th, addresses the controversy that has arisen in some scientific circles over the acceptance of the Templeton Prize by British astronomer Martin Rees (Scientific Extremism on Display — And the Prize Goes To …). Some examples of the negative reaction can be found in this column by Jerry Coyne, and this conversation with Sam Harris, both from guardian.co.uk.

Dr. Mohler runs through some of the history and then finishes with this summary.

The furor over the Templeton Prize to Lord Rees comes entirely from the scientific community, which seems absolutely determined to insist that even “a sense of wonder at the universe” and a refusal to pick public fights with religious believers is enough to prove that a serious scientist has sold his scientific soul to Christian fanatics.

Dr. Mohler is quite right when he notes that this controversy arises from a commitment to naturalistic materialism as world view. There is no doubt that this is true. The vocal detractors, those with the extreme views represented in Dr. Mohler’s column and in the two articles I linked above, are not in the majority, but they certainly exist. More significant is the deep assumption of philosophical naturalism that permeates as a presumed value of many many more.

Dr. Mohler then takes his summary, and the fact that no matter what we do some will vociferously oppose Christian faith, as a warning to stop trying to appease the scientists and to instead hold tight to the faith.

Keep this in mind when you hear someone argue that the conflict between naturalistic science and Christianity would be resolved if Christian believers would only “give a little” in terms of belief. As abhorrent as such a theological compromise would be in principle, this controversy shows that it fails practically as well.

Christians, let not this lesson be wasted.

Here, of course, we part ways. Not because I think we should give in to appease others, but because the need to “give a little” on certain views of creation is demanded by the evidence of the world, not by the desire to appease. As a Christian and a scientist I feel a deep need to be able to synthesize the truths we are learning about the mechanisms of the world and the Christian story of God’s work in his creation.

What do you think? Is this discussion of evolutionary creation about giving a little to placate the materialists?

Is Dr. Mohler’s claim fair to your understanding of the situation?

Now to the Bible and the Bus. In the second post put up April 19th, Throwing the Bible Under the Bus, Dr. Mohler addresses several points made by Dr. Giberson in a number of forums, finishing up with a quote from the recent book by Karl Giberson and Francis Collins,  The Language of Science and Faith: Straight Answers to Genuine Questions. I am not going to defend Karl Giberson in everything he has written. In some forums he comes off a bit too provocative for my taste. Here I would like to address the points Dr. Mohler makes about the the book by Giberson and Collins. I have read this book from cover to cover and posted on it several times. 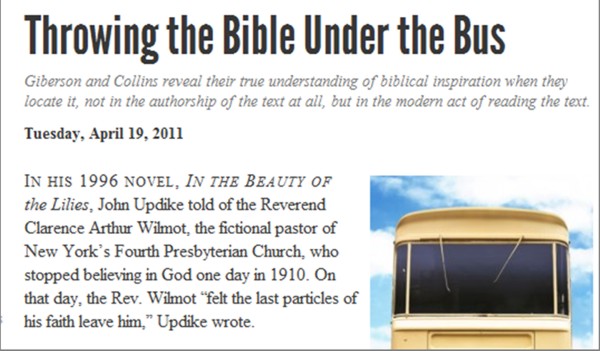 The header to Dr. Mohler’s post starts out with a bang:

Giberson and Collins reveal their true understanding of biblical inspiration when they locate it, not in the authorship of the text at all, but in the modern act of reading the text.

Wow, this is quite the provocative statement. It is repeated and elaborated on later in the post. Dr. Mohler quotes a paragraph at the end of a long chapter dealing with scripture, the nature of scripture, and the interpretation of scripture (No reference is given in the post – but the paragraph can be found on p. 102 of The Language of Science and Faith).

Biblical interpretation falls short without an understanding of biblical inspiration, of course, as we do not suggest that the Bible is simply another book to be interpreted. But we do a great disservice to the concept and power of inspiration when we reduce it to mere factual accuracy, as though God’s role were nothing more than a divine fact checker, preventing the biblical authors from making mistakes. A dead and lifeless text, like the phone book, can be factually accurate. The inspiration of the Bible is dynamic and emerges through engagement with readers.

Dr. Mohler takes this paragraph, out of context of what came before and what comes after in the book and proceeds to ridicule it. (I use the word ridicule not to be provocative, but because Dr. Mohler describes the paragraph as “ridiculous.”)

That paragraph is, quite simply, one of the most ridiculous statements concerning the Bible one might ever imagine. Who has ever argued that the divine inspiration of the Bible is reduced to “mere factual accuracy”? Giberson’s dismissive language about God as “nothing more than a divine fact checker” is sheer nonsense. Who has ever made such a proposal?

The conclusion of the paragraph is an embarrassing non sequitur. It is patently untrue that only a “dead and lifeless text, like a phone book” can be factually accurate. Giberson and Collins reveal their true understanding of biblical inspiration when they locate it, not in the authorship of the text at all, but in the modern act of reading the text.

So lets look at this claim by Dr. Mohler. He is correct when he says that  no one reduces the inspiration of scripture to mere factual accuracy.  And he is correct that no one claims that God’s role is nothing more than a divine fact checker. On the other hand those of us who have grown up in the evangelical church have heard many people claim that factual inaccuracies undermine the authority of the text. In fact we have heard many people claim that errors in the text would disprove inspiration, and there can be no errors of fact because God is not a liar. Thus part of Gods role is divine fact checker. This leads to some rather fantastic contortions to maintain the assertion of factual accuracy. In the famous (or infamous) book The Battle For The Bible Harold Lindsell suggested that Peter denied Jesus six times – because otherwise there are errors of fact in the gospels and this is inconsistent with divine inspiration. Dr. Mohler may have a more nuanced view – but this idea is part of our heritage and tradition.

What about the nature of the text? Here we see a real problem. Giberson and Collins did not say that only a dead and lifeless text can be factually accurate. Dr. Mohler added the word only to the statement and this addition distorts the emphasis of what Giberson and Collins actually write in this paragraph.   They are claiming that the Bible is a living and powerful book. This powerful living character is not defined by factual accuracy.  Doesn’t the paragraph seem to say that even a dead and lifeless text can be factually accurate rather than only a dead and lifeless text?  Scripture contains a variety of genre including poetry and story(at least in the parables) and there is power in the form that goes beyond factual accuracy – even Dr. Mohler would agree with this I believe.

What about inspiration? Finally and most importantly Giberson and Collins did not say that the inspiration of scripture is located in the modern reader, not in the authorship of the text. Dr. Mohler clearly disagrees with the understanding of inspiration espoused by Dr. Giberson and Dr. Collins (or for that matter by me), but it is incumbent on him as a Christian leader, president of “the flagship school of the Southern Baptist Convention and one of the largest seminaries in the world” to be fair to what they say and think. Pages 91-103 of the book provides a relatively detailed sketch of scripture and the interpretation of scripture. We need to understand the language being used in scripture, we need to identify the kind of literature, we need to understand something of the original expected audience, we need to understand the purpose of the text, extratextual knowledge provides important insight into the meaning of words in the text. Finally we read scripture in the context of the traditions of the church.

The “smoking gun” sentence that the  inspiration of the Bible is dynamic and emerges through engagement with readers is commentary on the power of the Spirit in the Christian and in the Church. I wonder what role Dr. Mohler ascribes to the Spirit as the Christian or seeker engages with scripture.

To wrap up Dr. Mohler adds a throw away jibe.

As they make their argument for theistic evolution, Giberson and Collins embrace a form of Open Theism and argue, quite consistently with arguments common to BioLogos, against the historicity of Adam and Eve.

In any case, a form of open theism is not claimed as the only possibility in the book.  As I outlined in the post Evolution, Entropy, and Human Beings 2 three possible approaches to the role of God are suggested. Two of these are consistent with reformed or Calvinist theology. The Rev. Tim Keller, who has been involved with many of the discussions of these issues at BioLogos, most certainly does not take the approach of open theism. Nor does BioLogos or The Language of Science and Faith take a firm position on the historicity of Adam and Eve. There are approaches that retain a historical view of Adam (Denis Alexander and John Stott have suggested such approaches for example) and these are discussed in the book as outlined in the post linked above.

So where does this leave us? As a Christian and a scientist I rather expect distortion and attack from some of those who fight hard for scientific materialism, who feel religion is a blight on our society. The kind of reaction described in Dr. Mohler’s first post is part of the package. This is life in our day and age.

On the other hand I expect a great deal better from fellow Christians. Especially from Christian leaders and most particularly from the President of a major seminary, training pastors for the next generation. Disagree, put forth your arguments, enter into the conversation. But … treat others fairly, address what is said and written with intellectual integrity,  interact with their ideas and statements, be critical where necessary, give the benefit of the doubt when things are not clear, avoid ridicule and distortion, in everything remember we are brothers and sisters even if you think we err (or vice versa). Assume the best – those who disagree may not be appeasers, caving to the world, but thoughtful and devout Christians with a different take on the evidence.

We have met the enemy – and he is us.

What do you think? Have I over reacted to Dr. Mohler’s posts?

How do we look at and understand the inspiration of scripture? Is it “throwing the Bible under the Bus” when we wrestle with the proper understanding of scripture in the context of new knowledge?

Comments that attack individuals rather than ideas or facts will be unceremoniously deleted.

If you have comments please visit Throwing the Bible Under the Bus? at Jesus Creed.

This entry was posted in Bible, Science and Faith and tagged Francis Collins, Karl Giberson, R. Albert Mohler. Bookmark the permalink.
%d bloggers like this: