The Search for the Historical Adam

The June 2011 cover story in Christianity Today is a summary of the state of the discussion about the understanding of Adam and Eve in our church. The subtitle lays it out – “Some scholars believe genome science casts doubt on the existence of the first man and woman. Others say the integrity of the faith requires it.”  This is a topic we’ve discussed a great deal on this blog, and a topic that will continue to come up for the foreseeable future. It will not be resolved in short order. In fact, the significance of the question requires that we revisit it from a number of angles, posing questions and considering the ramifications of the answers. Darrel Falk has posted some comments on this issue of Christianity Today and the question of Adam and Eve on the BioLogos blog –  BioLogos and the June 2011 “Christianity Today” Cover Story. I don’t have this issue in hand, and the cover article is not yet available on line. When it is available I will comment on it directly and pose some questions. 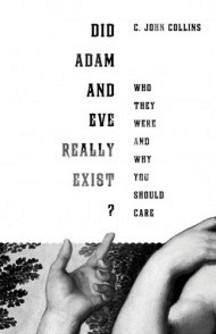 In a timely fashion, though, I received from the publisher (through Scot) a book by C. John Collins, Did Adam and Eve Really Exist?: Who They Were and Why You Should Care. This book expands on the discussion in his article in the ASA Journal Perspectives on Science and Christian Faith (v. 62 no. 3 2010) (I posted on it here). Dr. Collins’s goal in writing his book is stated in the introduction (p. 13)

My goal in this study is to show why I believe we should retain a version of the traditional view, in spite of any pressures to abandon it. I intend to argue that the traditional position on Adam and Eve, or some variation of it, does the best job of accounting not only for the Biblical materials but also for our everyday experience as human beings – an experience that includes sin as something that must be forgiven (by God and our fellow human beings) and that must be struggled against as defiling and disrupting a good human life.

He is not, he notes a little later, trying to provide the right answers. Rather his goal is to help Christians think through the issues critically and carefully. While he is critical of some positions held by Francis Collins as described in his book The Language of God and by many of those who are affiliated with BioLogos (and no doubt would be critical of some of my positions) he is not criticizing the BioLogos perspective or evolutionary creation in itself. It will be interesting to engage with Dr. C. John (Jack) Collins, working through his book and considering the arguments and reasons. His approach provides a useful entry into some of the key issues and ideas.

One of the first questions Dr. Collins raises in the introduction to his book is that of authorial intent in scripture and most importantly in Genesis 1-3. In the rest of this post I would like to explore this topic a bit.

Does authorial intent determine how we should read the accounts of Gen 1-3?

Does it matter if the author thought these accounts were historically true? If so why?

For some people establishing that the inspired Biblical authors thought that an idea was true, a historical statement was true is enough to establish its veracity. If the author of Genesis 2-3 thought that Adam and Eve were created exactly as described this is enough to establish it as a fact essential for the Christian faith. Dr. Collins places a high value on both authorial intent and the nature of Biblical authority, but finds the situation a bit more complicated than often thought and does not structure his argument on this approach to the text.

Dr. Collins suggests that there are at least four possible ways to look at authorial intent in Genesis 2-3 (p. 16).

The view argued by Dr. Collins is option 2. There is figurative language in the telling of the story of Adam and Eve, the story uses devices and techniques common to the literature of the day. But the authorial intent was to describe historical events. The use of rhetorical and literary technique is as appropriate to the inspired biblical text as it is to any kind literature. There is no need for wooden literalism. Here he quotes CS Lewis (Mere Christianity, Book 3, CH. 10): “People who take the symbols literally might as well think that when Christ told us to be like doves, He meant we were to lay eggs.“

It is not true though that if the text uses symbolic language it is merely symbolic. Symbolic language can be used to convey historical reality. Now we have to have a method for making a judgment about the nature of the elements of the story. Dr. Collins uses the following three criteria for this study (p. 19):

This is an intriguing set of criteria. As we consider the arguments in Dr. Collins book it will be interesting to apply them and to explore where they may help to determine the truth and where they may lead us astray. One place where I think that Dr. Collins and I may disagree is in the significance of authorial intent in the context of an overarching ancient near east worldview. The author intended to convey an ancient near east cosmology, with a world on pillars, the vault of the sky holding back the waters. This was an integral part of the worldview or author and original audience. There is no reason for us to assume that this cosmology was inspired by God and therefore correct. Perhaps Adam and Eve are not “merely symbolic” but part of an assumed worldview, not corrected by God, and used to convey his theological message in the same way that ancient cosmology is used rather than corrected. I am not giving this as the answer, but putting the idea up for consideration.

Is authorial intent significant? If so how and when?

What criteria would you use to evaluate the text?

If you have comments please visit The Search for the Historical Adam at Jesus Creed.

This entry was posted in Adam, Science and Faith and tagged Adam and Eve, C. John Collins, Genesis. Bookmark the permalink.
%d bloggers like this: