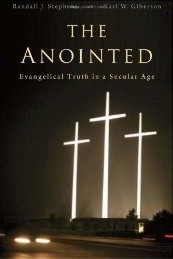 I recently received, courtesy of the publisher, a copy of the new book The Anointed: Evangelical Truth in a Secular Age by Randall Stephens, an associate professor of history at Eastern Nazarene College and Karl Giberson, formerly a professor of Physics at Eastern Nazarene. Giberson has now moved on to concentrate on a number of writing projects. In this book Stephens and Giberson examine several different case studies to explore the manner in which “America’s populist ideals, anti-intellectualism, and religious free market, along with the concept of anointing – being chosen by God to speak for him like the biblical prophets” influence broad ranges of evangelical and fundamentalist beliefs.

In chapter 3 Stephens and Giberson look at The Family of God. The topic  is manhood, womanhood, discipline, child-rearing, and sexuality – a rather broad mix, but the focus is on the intersection between evangelicalism and psychology. This is probably the most controversial of the chapters and, I think, the least clear cut. There is no obvious, or even fairly obvious, “correct approach” to sift through the views of secular experts. There is no Mark Noll or Francis Collins to use as a model.

In their discussion of “anointed” evangelical experts on family Stephens and Giberson turn briefly to J. Richard Fugate, Larry Christensen, and Tim LaHaye; don’t mention Bill Gothard at all, which rather surprised me; and then focus in on Dr. James Dobson.

Did Dr. Dobson’s Focus on the Family organization influence you, your parents, or your family?

Do you think he is right in his focus on sinfulness in children and on the need for  firm discipline?

Stephens and Giberson are both fair and critical in their treatment of Dr. Dobson and Focus on the Family in this chapter. Dr. Dobson is distinctly different from the “anointed” authorities discussed in the first two chapters. He has real credentials in the area for which he is best known. He earned a Ph.D. in child development from the University of Southern California and spent several years on the faculty of the USC medical school. He published in top notch peer reviewed journals. He left USC in 1976 and founded Focus on the Family in 1977.

Children and Discipline. Dr. Dobson’s experiences at USC, not specifically with his research but with the general culture of permissiveness and anything goes sexuality, led him to write the 1970 book Dare to Discipline and his career took a very different turn. He viewed the home,  school, and world as a moral battleground where parents must keep a firm hand to raise up their children. The most controversial of his positions is in favor of corporal punishment, the fact that he allows, even advocates, spanking as an appropriate form of discipline for young children – although only in limited circumstances and for limited reasons.

For Dobson, Proverbs 22:15 laid out the specifics of firm discipline: “Foolishness is bound in the heart of a child; but the rod of correction shall drive it far from him.” (p. 116)

Dr. Dobson took a stand and a stand many of us will appreciate against an anti-Christian approach by a significant number of outspoken psychologists and child development gurus.

Dr. Dobson believes in and takes a stand confessing the reality of both human agency and human sin. There is such a thing as wrong, and humans can act in deeply immoral ways.

He turns to St. Paul, who spelled out the ubiquity of sin in Romans 3:23: “For all have sinned, and fallen short of the glory of God.” The implications of such passages are crystal clear to Dobson and others. “Therefore,” he writes, “with or without bad associations children are naturally inclined toward rebellion, selfishness, dishonesty, aggression, exploitation, and greed.” Young people first and foremost, need redemption. In contrast, mainstream professionals urge parents to foster self-respect, mastery, and hopefulness in children. Empathy and communication skills also rank high. (p. 125)

Because of his emphasis on original sin Dr. Dobson finds discipline and boundaries to be essential. Children are not simply innocent vessels to be shaped and  formed. This emphasis disturbs some – and his most vociferous critics focus here. On the other hand his method and approach is really not all that extreme in the scheme of American culture at large – both within evangelicalism and in the broader culture.

Through the years Dr. Dobson has had a great deal of influence within evangelicalism. His books and courses sell and his radio show was quite popular. When my children were young I would listen to it on the way to work in the morning. There was good advice mixed in with an approach that was significantly more conservative than I was then or am now. (I was and am after all a working professional and a mother).  But then I never looked to one person or organization alone for guidance. I stopped listening after one show where a guest was advocating an approach to raising infants to refrain from crying. Crying, apparently, was viewed as a sign of sinfulness and wilfulness, even in an infant a month or two old. A properly trained infant, according to this woman, would not cry. When interviewing this woman Dr. Dobson did not endorse the approach as far as I could tell, but also did not point to potential flaws in it. I never listened to the show again.

On the other hand, the Adventures in Odyssey radio show put out by Focus on the Family was part of our family experience for another decade or more. Until we out grew it (or my children did).

Women, sexuality, and marriage. Initially Dr. Dobson and Focus on the Family stayed focused on family issues and away from public political pronouncements. This changed however, and he became much more of a conservative political presence. He was always known as conservative  on issues like the appropriate roles for men and women in the family and in the country, but in later years he became much more outspoken about political issues he saw as impacting the family. His approach is in line with much of American evangelicalism, but out of step with the experts in the academy and in the APA (American Psychological Association).

In particular Dr. Dobson is opposed to same-sex marriage and finds child-rearing within the context of same-sex relationships to be troublesome. In this he is opposed by the APA, most researchers at secular Universities, and more than a handful of scholars at Christian institutions. I know a couple of same-sex couples raising children, and it certainly doesn’t appear that they do a better or worse job than others as a whole. According to Stephens and Giberson Dr. Dobson has been caught, or at least accused of, misapplying the research of others to support his contention, especially on the issue of children raised by same-sex couples. But it is not entirely clear if this is an honest difference of opinion, the kind that can occur in any heated discussion, or a deliberate miscasting of evidence and quote-mining to make a case for his position.

Beyond issue of proper use of research though, these family issues are much harder to resolve than the rather academic issues of American history and scientific views of creation.  Dr. Dobson should not be the anointed authority to whom we turn, he and his organization have both strengths and serious weaknesses. But the science of psychology and human behavior is something of a fluid field and moral behavior and human sinfulness are concepts that Christianity takes seriously.

Where should we look for advice and insight? In a post Scot linked in his Weekly Meanderings on Saturday, The Scandal of the Evangelical Experts, Thomas Kidd chided Stephens and Giberson for a rather strident New York Times piece, The Evangelical Rejection of Reason, promoting this book. Toward the end of his post Kidd reflects:

Giberson and Stephens don’t give evangelical readers much guidance on how to draw the line between wisely appropriating mainstream scholarship and abandoning essentials of the faith.

The Anointed raises important questions about the way that some evangelicals sequester themselves in intellectual cul-de-sacs. But the book also makes me wonder what Christians in positions of academic influence can do to help upgrade the intellectual rigor of American churches.

This reflection of Kidd’s is dead on the money in the chapter on The Family of God. Is the answer to simply accept the pronouncement of secular experts? Weigh the majority as though truth was a democracy where all experts received one vote? Certainly this is not the case. Scientific naturalism and the rejection of the supernatural isn’t exactly the approach we should take to the questions of science and faith. Yet this is the approach that a majority of secular experts in the sciences would advocate.

Nor is the denial of human sinfulness the approach we should take to behavioral or moral issues. As Christians we believe that we are broken eikons (to use Scot’s expression for image of God) and responsible agents. This brokenness affects both children and adults. It affects human behavior towards others – and this includes sexual behavior. We all, or at least most of us, agree that some sexual behavior is deviant. The recent scandal at Penn State is a case in point – and the secular experts agree. The “hook-up” culture common on many college campuses isn’t exactly consistent with Christian teachings either, but here we may diverge from the secular experts. There is right, there is wrong, and there is moral responsibility.

Stephens and Giberson give no convincing approach in this chapter to help evangelical readers evaluate and appropriate mainstream scholarship wisely. Although they point to the fact that there are some Christian experts who take a position quite different from that of  James Dobson on many of these issues, including both corporal punishment and the issues of sexuality and same-sex marriage, there is no effective guidance, and no convincing expert to turn to. This is an issue where the general approach to turn to the best educated Christian experts doesn’t seem to work at all. There is no Mark Noll or Francis Collins who puts forth a convincing argument.

Where should we turn on these thorny and troubling issues?

Who would you list as evangelical ‘experts’ on family?

Who can we trust to provide wise insight into the strengths and weaknesses of mainstream scholarship here?

If you have comments please visit Anointed? … Evangelicals and Authority 3 at Jesus Creed.

This entry was posted in Academia, Evangelicalism, Public Issues and tagged Karl Giberson, Randall Stephens. Bookmark the permalink.
%d bloggers like this: