When Was Genesis Written … And Why? 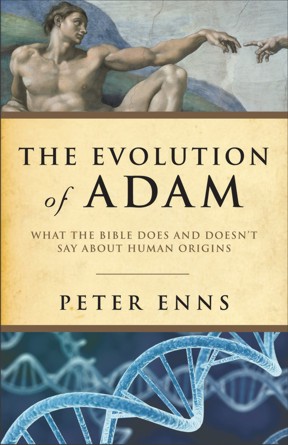 The Evolution of Adam: What the Bible Does and Doesn’t Say about Human Origins by Peter Enns is not yet another science and faith book, after all Enns is not a scientist. His greatest scientific achievement so he says in his Huffington Post column:

The best explanation for it [human origins], geneticists tell us, is that humans evolved from primates. Since my greatest scientific achievement is doing puppet shows with dissected feral cats in high school biology, I feel I have no right to contest — and I likely speak for many other evangelicals in that regard (sans puppet show).

Instead Enns has written a book coming from his expertise as a biblical scholar (Ph. D. in Near Eastern Languages and Civilizations  from Harvard) and rooted in the conviction that we need to revisit scripture and think deeply about how to read Genesis and how to read Paul. The first chapters of The Evolution of Adam address the questions raised by Genesis regarding the origin and purpose of the creation narratives in the book. Although evolutionary biology challenges traditional Christian views of human origins, it is important to realize that this is not the sole challenge. The challenges to the traditional view of Genesis and indeed all of the Pentateuch from Genesis through Deuteronomy are both internal and external to the text. These challenges arise from Biblical Criticism, Archaeological study of the Ancient Near East, and from science.

Ch. 2 of The Evolution of Adam provides an overview of the internal issued raised by careful study of the text of the Old Testament.  Many of the internal challenges to a traditional view of the Pentateuch were noted long before either archaeology or science had any role in the discussion. Deuteronomy is a good case in point. The traditional view makes this one of the books written by Moses before the conquest of Canaan, but the book is framed as a third person account about Moses and contains references as though it is written much later. Reference like the following have raised questions:

1:1 These are the words Moses spoke to all Israel in the wilderness east of the Jordan.

31:1 Then Moses went out and spoke these words to all Israel:

34:6, 10-12 He buried him in Moab, in the valley opposite Beth Peor, but to this day no one knows where his grave is. … Since then, no prophet has risen in Israel like Moses, whom the LORD knew face to face, who did all those signs and wonders the LORD sent him to do in Egypt—to Pharaoh and to all his officials and to his whole land. For no one has ever shown the mighty power or performed the awesome deeds that Moses did in the sight of all Israel.

As early as 400 AD Jerome commented on Deut. 34 and proposed that “to this day” in v. 6 referred to the time of Ezra during the return from the Babylonian exile. Enns also points to a 12th century rabbi Abraham Ibn Ezra who noted a number of issues in the Pentateuch that suggest a relatively late date for the edited text. Genesis 12:6 is one such example noted by Ibn Ezra:

Abram traveled through the land as far as the site of the great tree of Moreh at Shechem. At that time the Canaanites were in the land.

The specification that the Canaanites were in the land suggests that the text was edited and compiled at a time when the Canaanites were no longer in the land. According to Enns “Ibn Ezra seems to have thought that a date of authorship from around the time of David would explain at least some of what the Pentateuch says.” (p. 17)

When you read the text of the Pentateuch from Genesis to Deuteronomy what strikes you as troublesome or perplexing?

Have you ever wondered about specific passages that don’t seem to be what they are supposed to be?

The modern consensus in biblical scholarship has expanded on the realization that the text of the Pentateuch as we have it is an edited text pulled together for a purpose. Although the theories put forth have varied rather widely and have sometimes been overly skeptical of the text or have dug into the text for things that are a bit of a stretch, there is a general agreement that has emerged. Enns pulls this together:

The Pentateuch was not authored out of whole cloth by a second-millenium Moses but is the end product of a complex literary process – written, oral, or both – that did not come to a close until the postexilic period. This summary statement, with only the rarest exception, is a virtual scholarly consensus after one and a half centuries of debate. To admit this point does not in any way commit someone to one particular theory of how the Pentateuch came to its present form (and it does not in and of itself disallow some writing by Moses, hypothetically). It is only to admit that what we have cannot be explained as an early (second-millenium-BC) document written by essentially one person (Moses). Rather, the Pentateuch has a diverse compositional history spanning many centuries and was brought to completion after the return from exile. (p. 23)

The evidence for this position is summarized as follows (p, 24-25):

1. The entire Pentateuch is written in the third person and in the past tense.

Even Moses is written about in such a manner from Exodus through Deuteronomy. A few examples were given above. The parenthetical comment in Numbers 12:3 provides another example: Now Moses was a very humble man, more humble than anyone else on the face of the earth. Presumably this was not written by Moses.

2. There is no claim in the Pentateuch that Moses is its author.

There is a claim that Moses did some writing – but not the entire text of the Pentateuch and certainly not the text in the form we have it today.

3. The Pentateuch contains numerous explanatory comments that reflect a time well beyond that of Moses.

Genesis 36:31 is a case in point: These were the kings who reigned in Edom before any Israelite king reigned. Surely this was written sometime after the monarchy was instituted, that is some time after Saul and David.

4. The Pentateuch assumes that the conditions present at the time of writing were in existence in ancient times.

5. The presence of doublets (two versions of the same story) suggests a complex literary (perhaps oral) history rather than one author.

There are many such doublets in the Pentateuch – beginning with the two creation narratives in Genesis 1 and 2.  Enns lists Gen 15 and 17; Gen 12, 20 and 26; Exod. 3 and 6; and Exod. 17 and Num. 20 as examples. It is interesting that Enns lists Gen 12, 20 and 26 here. I can vividly recall reading these passages many years ago, putting my Bible away and not attempting to read the OT again for years. It was abundantly clear that this was not a simple historical account. The OT was not what I had been taught. Read in small chunks or story book form there are no necessary problems – but when the text is read straight through in large chunks many of the problems are, or seem to me at least, self-evident. My biggest problems with Genesis were never science – rather they were internal to the book itself.

6. The doublets are not easily harmonized but represent significantly different points of view.

Harmonization doesn’t make much sense and the explanations seem overly contrived. Harmonization is an attempt to make the text of scripture conform to our expectations and preconceptions. It is far better, I think, to take the text as it is and listen to what it has to teach us.

7. The language of the Pentateuch reflects the state of Hebrew in the first millenium BC.

This is conclusive – to quote Enns: “The Pentateuch as we know it is a first-millenium product.” It wasn’t produced in its final form at the time of the Exodus, or even during the time of the Kingdom of Israel with Saul and David or the the kings that followed in Israel or Judah. It was edited into the final form after the return from the Babylonian exile.

There is a great deal more explanation and information in Chapter 1 and the first part of Chapter 2 of The Evolution of Adam, but this suffices to make the point. The text of the first five books of the Bible was compiled, edited, and structured for a purpose. This edited text is part of the Holy Scriptures that Paul reminds Timothy he has known from infancy:

But as for you, continue in what you have learned and have become convinced of, because you know those from whom you learned it, and how from infancy you have known the Holy Scriptures, which are able to make you wise for salvation through faith in Christ Jesus. All Scripture is God-breathed and is useful for teaching, rebuking, correcting and training in righteousness, so that the servant of Godmay be thoroughly equipped for every good work. (2 Tim 3:14-17)

We don’t need to make the text of the Old Testament into something it is not. The text we have is able, Paul tells us, to make us wise for salvation through faith in Christ Jesus. The text was written, compiled, and edited for a purpose – and this purpose we believe as Christians is primarily theological and ultimately Christ centered. We need to look to the text we have to understand the purpose and point of the Pentateuch and the remainder of the Old Testament. In the next post we’ll start to explore some of Enns’s views about this purpose and point of the Old Testament. For now what do you think?

Have you ever read the Pentateuch in large chunks or has your reading been confined to isolated bits and pieces at a time?

How do you make sense of the text and what attitude to you take to the text?

If you have comments please visit When Was Genesis Written … And Why? at Jesus Creed.