Evolution and the Creativity of God 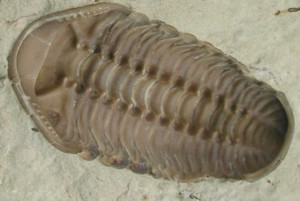 Chapter 7 of God and the Cosmos: Divine Activity in Space, Time and History by Harry Lee Poe and Jimmy H. Davis is titled simply God and Life. Harry Lee Poe is the Charles Colson Professor of Faith and Culture at Union University in Jackson, Tennessee. Jimmy H. Davis is vice president for regional campuses and University Professor of Chemistry at Union University. After discussing openness and action in cosmology, geology, chemistry and physics they turn to one of the most controversial topic in the science and faith discussion: the role of God in evolutionary biology. In their discussion they make a point to separate biological evolution as natural history from natural selection as mechanism.

And the footnote is worth including as well:

9This approach follows the pattern of how scientists understand how phenomena develop. First, observations and experiments are collected into an organizing concept. For example, in order to understand the behavior of gases, scientists collected observations and experiments of gases at different temperatures, pressures, and volumes. Relationships were formulated relating these three variables without knowing the mechanism for these relationships. Later the kinetic-molecular model was proposed as the mechanism (causal connection) for the observed behavior: gases were modeled as billiard balls in constant motion, which gave rise to the observed relationships. Likewise in regard to biological evolution, we will first present the observations/experiments that led to the concept of evolution, followed by proposed mechanisms for biological evolution. (p. 213-214)

When I teach about gases at the upper-division undergraduate level and at the graduate level it is in the context of statistical mechanics and thermodynamics. We quickly move beyond the simple kinetic-molecular model described above. Molecules are no longer “billiard balls” but have size, shape, and intermolecular interactions that are two-body, three-body, and even higher order.

Do you distinguish evolution as natural history from natural selection as mechanism?

What do you think it would take to disprove evolution? 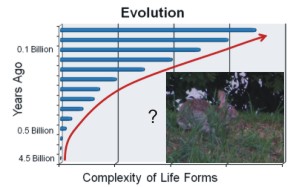 Poe and Davis proceed to discuss the evidence for evolution as natural history. The key ideas of evolution, increasing complexity of species, common ancestors, and mutability of species are well supported by the evidence.

The oldest rocks have only simple life forms.

The youngest rocks have the life forms most similar to living organisms.

There is a progression with increasing complexity from oldest to youngest rocks.

To show gradual change in a lineage, one needs a good succession of sediments without missing layers. Trilobites are one of the better known group of fossils. Trilobites first appear in the fossil record about 540 million years ago and finally disappear from the record in the mass extinction at the end of the Permian period about 250 million years ago. A study of eight lineages of trilobite fossils in a three-million-year sample of shale revealed that all lineages showed a net gradual increase in segments on the rear section of the trilobite. (p. 221)

1. Individuals within populations are variable.

2. The variations among individuals are, at least in part, passed from parents to offspring.

3. In every generation some individuals are more successful at surviving and reproducing than others.

4. Survival and reproduction of individuals are not random; instead they are tied to variation among individuals.

Variation between individuals and even the development of new species need not result from natural selection. Migration tends to homogenize populations while genetic drift is a nonadaptive random mechanism that increases diversity. Changes arising from genetic drift can be positive, negative, or neutral for survival.

Epigenetics refers to changes in the way genes are expressed due to changes in the environment or circumstance of an individual. This can be passed on from generation to generation. The care of parents for offspring can change the gene expression of the offspring – and of their offspring. Poe and Davis note that one epigenetic variation of the common toadflax (a flowering plant) has been around for over 250 years and thus for many generations.

Epigenetic insight says that not only do some organisms respond better to environmental stress because of their genetic makeup but that the organism can respond to the stress by reprogramming how the genetic makeup is expressed. Since the changes to the epigenome are partially reversible, the resulting phenotypes are possibly more variable and the changes to the phenotype less final than phenotype changes due to modification of the genome sequence. (p. 232)

So – the bottom line: Evolution as natural history is a clear part of the record. Natural selection is part of a very complex, and not yet completely understood, mechanism for the evolutionary trajectory observed in biology. Natural selection, however, is likely not the only mechanism at play.

And it makes no sense to go on about Darwinism and Darwinists. Natural selection as originally proposed by Darwin is only a vague empirical mechanism. Chemistry, physics, genetics, and more have put legs on the mechanism by bringing it down to the molecular level. This is an important point – not well appreciated by many. We are not, as one commenter suggested, “disciples of Darwin.” Darwin had important insights – but he was one of many. Evolutionary theory today would be no different except in nomenclature if Charles Darwin had never lived, just as the theory of gases would be no different if Robert Boyle had never lived.

But Where is God? Poe and Davis note that the universe is both open and purposeful. Evolution is not a highly contingent role of the dice but a constrained process with convergent solutions to the challenges posed to the development of life. Here they quote Simon Conway Morris and his book Life’s Solution – a book I posted on several years ago.

The mutation of DNA to produce new functions is open and complex – perhaps even unpredictable. We cannot predict exactly what capabilities may appear in the future. Perhaps we’ve reached an endpoint, perhaps not. But this openness leaves room for the action of God to direct both past and future changes – not by violating “natural laws” or causality but perhaps by selecting possibilities. Poe and Davis speculate that the epigenome provides another pathway for the action of God.

The epigenome refers to the collective instructions that tell the cells what to do as the body develops from a simple two-cell organism into something much more complex. Environmental factors like hunger and plenty affect the instructions of the epigenome. Rather than a dictator that determines the biological future of an organism’s descendants, DNA is a servant at the disposal of other influences. The genetic structure is open to outside influence. (p. 245-246)

Any move to eliminate the action of God from evolutionary biology is a philosophical or theological move, not a scientific move. To connect evolution with atheism is to make a metaphysical statement. There is nothing, according to Poe and Davis, in the science itself that removes God from the process. In fact deism restricted God’s involvement to the original act of creation and the establishment of laws, but the evidence of evolutionary history leaves ample room for the involvement of God in the process from one generation to the next. It is not either God or natural mechanism, but more accurately the action of God through the natural pathways we observe.

Even the role of death in creation is a philosophical rather than a scientific question – or so Poe and Davis suggest. The problem of death for people is a theological question – a perfectly valid question. But the role of “death” in the rest of the universe is simply a part of a universe with direction moving toward a purpose.

Does evolution or the elucidation of mechanisms for evolution remove space for the action of God?

How would we, or could we, identify the action of God?

If you have comments please visit Evolution and the Creativity of God at Jesus Creed.

This entry was posted in Science and Faith, The Fossil Record and tagged Evolution. Bookmark the permalink.
%d bloggers like this: