Love Is the Name of the Game 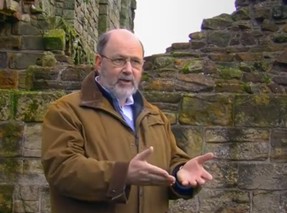 As I was preparing last week’s post A Conversation About Genesis, I came across the YouTube video of this extended reflection by Tom Wright put out by World Vision as part of a Faith Effect campaign in Australia. This is an excellent clip – well worth the 11 to 12 minutes or so it takes to watch it. In fact, it is well worth the 20 to 30 it takes to listen more than once and mull over some of the ideas.

The reflections here draw on the ideas in Wright’s book How God Became King as well of many of his earlier books. (I’d say his latest book, but it is already seven months old – so I am sure there are several since.)

A few quotes to whet the appetite:

The vision which we find coming into full focus through Jesus actually goes right back to the beginning. It’s there in Genesis. When Jesus talks about what God is doing right now he is constantly invoking the sense of the ancient human vocation. God calls human beings to be his image bearers. (1:40-1:58)

This is how the Kingdom of God comes to earth. Wright goes on to reflect on the way Jesus approached the world and the people around him. The way of Jesus was …

…showing that God is running the world by healing, by bringing hope, by transforming, by bringing justice, by challenging the people who were doing the oppression and the wickedness and then by his own death taking the problems and the pains of all that into himself so that then these people who follow him can be the world transformers. (3:58-4:14)

The spread of Christianity …

The way Christianity spread over the first three centuries when the Romans were doing their best to stamp it out, was not simply by people going into the market place and saying Jesus is Lord you must believe in him, they did that too, but by people seeing that here was a community of people who lived in a totally different way. The Christians were known for going and helping people who were not their kith and kin, who were not part of their ethnic group or part of their business interests. If somebody was sick, if somebody was poor, the Christians would go and look after them. They’d say “why do you do that you’ve got nothing to gain by it” and they’d say “well, its because we follow Jesus and this is the way that Jesus does stuff”. So that it is what you do that generates the question to which the answer is Jesus is becoming king through his death and resurrection etcetra. (5:40-6:32)

As we are living as Christians we need to remake our categories and realize that heaven and earth really did come together in the incarnation, the life, death, and resurrection of Jesus. We are not pinning our flag on God’s map – God did it. Grace transforms us so that we can be transformers. Wright uses this to go on and suggest that we should all be thinking about what God is calling us to do in the whole body of Christ.

But it all comes down to Love.

One day, in God’s new heaven and earth reality, Love is the language that we’ll be speaking, and we get to learn it and practice it in advance. It is like learning the songs that they will sing in God’s new world. We learn them and sing them here because we are supposed to people through whom a taste of the new world comes into the present. And again, if you think that that is just private and not something that goes out into the wider world you’ve missed the whole point. The whole point of love is that it is generous and outgoing. And so for Paul and for the other early Christian writers love is not just as it were one virtue among others. Love is almost the name of what it means to be a Christian. (11:24-11:36)

I don’t think Wright goes far enough in that last statement. He leaves some “wiggle-room.” But love is the name of what it means to be a Christian. No qualifier, no almost. Wright doesn’t use this example – but I will: Living as though God is king means living in and reflecting out love. Love is the name of the game. Love God, love others. This theme runs through the gospels, it runs through Paul and the other New Testament writers. This theme gives a whole new perspective on the entire Old Testament. This isn’t the soft and wimpy approach, diminishing the gospel, it is the whole game. As God loves us so are we to love others.

“You have heard that it was said, ‘Love your neighbor and hate your enemy.’ But I tell you, love your enemies and pray for those who persecute you, that you may be children of your Father in heaven.” (Matthew 5:43-45)

Wright’s reflection on the spread of Christianity is particularly important here. Scot put up a graphic on Saturday afternoon that illustrated a Decline in Religion. Some may doubt the reality of this trend – but it is self-evident in my world. Religious faith is viewed by most as unnecessary at best, irrational and dangerous at worst. We will not make a difference by having a better Sunday morning service, by serving better coffee, by having a more extroverted and energetic staff, by avoiding the hard questions, by keeping things shallow and palatable. Nor will we make a difference by focusing on precision in theological expression or the glory and sovereignty of God. We will make a difference by being the people of God such that his love is evident in us and through us. We must first care for the family of the people of God in our local church (why would any one join a family that rejects or marginalizes its own?) and we must also care for others locally and globally, not as an evangelistic gimmick to reel people in and keep churches stocked, but out of genuine love as a reflection of the very love of God. It is what we do and how we reflect God’s love in the world that will generate the questions to which the answer is Jesus is Lord. I am not a pessimist, I think that the Church will thrive through the power of the Spirit, but Christendom is behind us, and if it forces us to focus on the essence of being the people of God, that may be a good thing.

Is Love the name of the game?

If not, why not? Is the “almost” a justified qualifier?