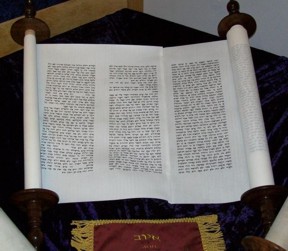 I was inspired earlier this year to listen to the whole Bible straight through – inspired by the example of some of the regular readers and commenters on this blog. In the course of this project (as of today I am about 3/4 of the way through a second pass) I have learned quite a lot. After many decades in the church, there was very little that was unfamiliar. I think this is the first time I’ve had the patience for all of 1 Chronicles – even the interminable lists. And it is probably the first time I’ve heard some portions of the minor prophets. But by and large the material was familiar. I know the stories and the people. The surprise was in the context provided by this birds-eye view. Little bits and pieces, out of context and rearranged, simply do not do justice to the whole sweep of scripture.

As a consequence of this project I have listened to the book of Job not once, but three times through. After the second I had to stop and listen again, with more careful attention. The book of Job strikes me as probably one of the most significant, misunderstood, and under appreciated books in the entire Bible. I am far from an expert on Job – but in a coincidence of timing two new commentaries on the book of Job were published just this last August. The first is by Tremper Longman III Job (Baker Commentary on the Old Testament Wisdom and Psalms) and the second is by John Walton Job (The NIV Application Commentary). Over the course of the next many weeks I intend to post about once a week on the book of Job using both of these commentaries, along with a few others I’ve gotten from the library including Job (Ancient Christian Commentary on Scripture), as source material. How long this series will go depends on the interest level, both mine and that of the readers of this blog.

Have you read the book of Job lately?

What message should we as Christians take from this book?

Longman introduces his commentary of Job in the series preface (he is also the series editor) with the following observation:

Job is a difficult book from start (translating its obscure Hebrew vocabulary) to finish (understanding its place in the canon), but it is also a profound exploration of wisdom and suffering. (p. 13)

Job is a profound exploration of wisdom and suffering. But beyond this the book of Job also provides insight into the nature of God, the nature of Creation, the nature of man, and the interaction of God with his creation and his creatures. Its place in the canon, handed down by the church through the Spirit, makes it an important book in any orthodox discussion of a number of issues at play in the discussion of the intersection of science and the Christian faith.  Because no one really looks to the book of Job to find concord between science and faith it provides an opportunity to look at scripture directly, without the historical and cultural baggage attached to some of the others texts. My primary purpose in this series, however, is not to find rapport between science and the Christian faith, but to better understand the book of Job, its message, and its role in the canon.

The Genre of Job. Both Walton and Longman begin their commentaries with a discussion of the form and genre of Job. The book of Job is a highly literary text, consisting of prose and poetry. It is, Longman tells us, “a poetical book framed by a prose narrative.” The book of Job is wisdom literature, carefully structured to make a philosophical or more precisely, a theological point. Some of the structure, like some of the language, is obscured by the passage of time. This is an old book, and it uses language and grammar that is uncommon. Longman points out that Job has a higher percentage of rare words than any other OT book except Song of Songs. This, along with the peculiar grammar in the poetry, presents special challenges to any modern translator or interpreter.

And of course both Longman and Walton address the question sure to come up in any evangelical audience. Did Job really exist? Is the book of Job about the real suffering of a historical figure? Both Walton and Longman note that it is not possible to know for sure, and both emphasize that it does not matter.  The book is true whether Job is a literary figure or the book has a historical figure known for his response to suffering behind the story. Walton seems the more likely to think that there was a historical on whom Job is based, Longman finds it highly unlikely that Job was a historical person. But more importantly neither Walton nor Longman find the significance  of the book in the historicity of Job.

The book is not about Job.I doubt that can be emphasized too strongly. The book of Job is wisdom literature.  John Walton puts it like this:

In approaching this question, we must keep foremost in our mind that this book is manifestly and unarguably in the genre category of wisdom literature, not historical literature. As wisdom literature it makes no claims about the nature of the events. In that sense the discussion about whether the events are real events is misplaced. A second understanding that is important is that as wisdom literature, this book would easily fit into the classification “thought experiment.” In such a case the author is using the various parts of the book to pose a philosophical scenario that will be used to address the wisdom themes as we have articulated them above.  … we would be mistaken to think that the author seeks to unfold a series of historical events. It is wisdom literature. (p. 26)

The author of Job may have used a real historical antecedent to frame the story he wishes to tell and the points he wants to make, but that is an unimportant detail.  It simply doesn’t matter. The book is about God and the way that God works in the world. It is about God’s creation, the nature of God’s creation, and the appropriate response of mankind to God.

Does it matter if Job is a historical character?

Does Job as “thought experiment” detract from its power as inspired scripture?