The poetic portion of the book of Job begins in Chapter 3 with Job breaking the silence and cursing the day of his birth. Translation below from Tremper Longman III (Job (Baker Commentary on the Old Testament Wisdom and Psalms)) (p. 96-97) 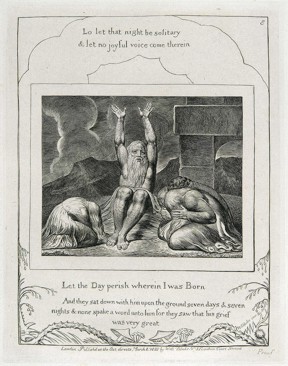 Job’s grief is deep indeed – a grief most of us cannot even begin to fathom. While he does not curse God neither is he passively untouched by deep and despairing grief. Having finished cursing his day, Job continues on to wish he had died at birth, or even before birth in the womb and concludes by wondering why life is given at all. He cursed the day of his birth and he now laments the day of his birth. Death would provide the peace he has lost in this life. Small and great are there together, the stillborn infant and the king, the servant and prisoner are free from taskmaster.

In all of this Job does not curse God – or accuse him of wrong doing. But Longman suggests that he is grumbling, along the lines of the grumbling of the Israelites in the desert following their escape from Egypt. This grumbling causes his friends to begin their challenge.

John Walton in his commentary (Job (The NIV Application Commentary)) has a somewhat different take and emphasis. He does not suggest that Job’s response in any way justifies the response that follows from his friends.

Distress over one’s circumstances is normal; therefore we can hardly blame Job for his response. Though God is sovereign and Job must therefore hold him responsible, this is not the same as questioning God’s rights. More importantly, even if Job were to question God’s actions, this would not indicate that he counted benefits more important than righteousness. Notice that he does not say that his righteousness was useless or that he wishes he had never bothered, nor does he demand his benefits to be returned. (Walton p. 119)

Death preferred to life of suffering. In the last section of Job’s lament he turns to the question of the value of life over death. Again the translation is from Longman’s commentary verses 20-23:

The hedge is not a hedge of security but of obstruction. It prevents a man from seeing what will come and acting accordingly. There is no clear direction or goal to life – no aim or path. According to Walton (p. 134) “God’s hedge,” Job complains, “limits human knowledge so that one cannot comprehend God’s ways.” As such it is a hedge of oppression – in the absence of knowledge expectations, rewards and punishments, life itself loses focus and meaning for Job.

What does death bring? Walton includes a long discussion on Israelite views of death, afterlife, Sheol, and future hopes in his commentary. This discussion would be worth a post on its own. The full Christian view of death, hell, and judgement reflected the New Testament did not begin to develop until the intertestamental period. Walton’s discussion is fascinating – and no doubt only touches the surface. But an understanding of the Israelite view of death – and the impact this had on their view of their relationship with God – is important to a proper understanding of the message of the book of Job. If we read a full Christian view of resurrection into the book of Job, as say Thomas Aquinas did, we will no, make that stronger, certainly, miss the depth of the message of the book. The depth of Job’s lament and his questioning the value of life is only fully appreciated when we understand his hope and expectation for the future.

1. The Israelites did not construct their relationship with God around a hope of heaven. People often convert to Christianity because of fear; with heaven to gain and hell to avoid conversion is logical. … To put it bluntly, our Christianity can be all one way: What’s in it for me? This is precisely what the Challenger had claimed about Job’s perspective. The dynamics of the Israelite faith operated on a totally different level. With no eternal gain in sight, their faith was inclined to be more focused on God and less on self; this element also made their faith more concerned with the present than the future. …

2. We can now understand the Israelite’s struggles with God’s justice and recognize the importance of the RP. While they had no hope of heaven in eternity, their faith offered possible gain in the form of prosperity and long life. … For the Israelites, then, God’s justice was a day-to-day concern.

Perhaps one of the most important messages of the book of Job (and we’ll see if this bears out) is that we are not to be in “it” for me. Rather we must trust in the wisdom of God. The fear of hell and even the hope of resurrection can provide a motivation for “righteousness” as distorted as that arising from the retribution principle, where the emphasis was material reward for righteousness and punishment for wickedness in this life.

What do you make of the lament of Job?

What best reflects the depth of his despair?

Is Walton right to compare the accuser’s claim that Job was “in it for himself” through material reward for righteousness with Christians “in it for themselves” through focus on the hereafter?

If you wish to comment please see Job’s Lament (and What’s in it For Me?) on Jesus Creed.