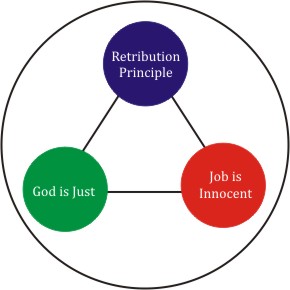 The first of three cycles of speeches in the debate between Job and his friends covers Job 4-14. Each of the friends, Eliphaz, Bildad, and Zophar, reprove Job and Job responds to their charge. Job also reflects on his desire for a hearing in the heavenly court and either looks forward to death or wishes he had never been born. The new commentaries by John Walton (Job (The NIV Application Commentary)) and Tremper Longman III (Job (Baker Commentary on the Old Testament Wisdom and Psalms)), both their agreements and their differences, help us explore the ways that the book of Job challenges our comfortable presuppositions on a number of issues related to pain, suffering and the nature of God’s (good?) (just?) world.

Job and all of his friends have a view of the way that the world operates that can be visualized using a triangle. They all agree that the retribution principle should govern the world. Righteousness is rewarded and wickedness punished. The difference between Job and his friends lies in the identification of the weak link. Job knows he is innocent, and questions God’s justice. The friends assume that because he is suffering Job is guilty. Bildad even infers that Job’s children sinned:

We know, however, that Job is right – he did not sin and bring this suffering down on his head. His children did not die because of their own sin or because of the sin of their father. He is wrong that this implies that God is not just. The retribution principle is the weak link in the triangle. It is not that the retribution principle never applies, but that it doesn’t apply in an absolute sense. The righteous do not always prosper, the wicked do not always suffer. Reality is far more complex.

Is Genesis 3 the solution to the conundrums of Job 4-14? Longman suggests several times in his sections on Theological Implications that the fall is the answer to the hard theological questions introduced by this section of Job, and indeed the book of Job as a whole. The retribution principle is not an absolute because we live within a fallen world. Job doesn’t deserve the suffering he has experienced because he is personally a vile sinner in the hands of an angry God. The prologue of Job does not allow us to draw this conclusion. “Have you considered my servant Job?” Yahweh asks the accuser. Yet the world is fallen, and evil exists.

But was God unjust? Some modern readers of the book believe so … But to say that God is unjust requires us to believe that God owes Job a good life since he has been good and that it is unfair for God to take away Job’s wealth, health, and family.

But this is not the biblical view of God and human beings. Reading Job in the light of Gen. 1-3, we can say that God created humanity to enjoy the blessings of life forever. Adam and Eve are pictured as living in Eden, a place whose very name means “luxury” or “delight.” Their rebellion led to their punishment, and forever afterward human beings deserve death and not life. Job’s earlier life was not something he earned, but rather it was an act of divine grace. The message of the book of Job is not that life is fair, but that God is wise and sovereign and perfectly just. (pp. 182-183)

And in the commentary on theological implications within Job’s third response (Ch. 12-14):

God’s actions in the world are double-sided. God destroys and God builds up. …In this fallen world, however, God’s actions are not always so neatly divided. In other words, the righteous are sometimes treated as if they are wicked, and the wicked as if they are righteous (Eccles. 7:15). … God does not promise perfect justice in a fallen world. But in the end all things work out in conformity with God’s justice, and the righteous receive their reward. (p. 216)

The Human Condition: Short of Days and Full of Trouble (14:1)

So why is life short and hard? The answer comes in Gen. 3 when Adam and Eve rebel against God. They replace God’s sovereignty with their own. By eating the fruit of the forbidden tree, they try to define their own moral standards and not allow God to do so. The consequence is death and suffering. Humans are alienated from God, from each other, from creation, and even from themselves.

So why do humans experience suffering? Because of sin. Now I am beginning to sound like on of the three friends: Job is suffering because of sin. However, as I have repeatedly emphasized in this commentary and will do so till the end, the book of Job makes very clear that Job is “innocent and virtuous, fearing God and turning away from sin” (1:1 and elsewhere). We lose our way in the book of Job if we ever forget that Job is not personally responsible for his suffering.

On the other hand, there would be no suffering and death apart from sin (Rom. 5:12-21). What the story of Job undermines is the belief that all of our personal suffering and pain and our death are the direct result of our own personal sin. … The book, though, is not denying that it is human rebellion that has marred life and brought death into the world. (pp. 218-219)

Longman’s commentary raises several questions here that I would like to ponder. These questions arise from the impression that Longman is shaping the interpretation of the book of Job to make it fit within his theological expectation. But we should, perhaps, first let each book have its own voice and then look at the overall picture that emerges.

1. Is Longman right and we should view the justice of God through Genesis 3? Mankind in the garden forfeited the expectation of fairness. Job was granted wealth, health, and family by divine grace, thus taking it away was not unjust.

2. Is the reference back to Genesis 3 imposed upon Job 4-14? It appears that Longman reads Job through the lens of his theology. This may, or may not be a valid approach, but the assumptions should always be up front.

3. Does Genesis 3 help to realize that God is just and that Job is not personally responsible for his suffering?

4. Is Job consistent with the idea that the righteous shall receive their reward? This conclusion appears to me imposed on the book from the outside. But perhaps this is a reasonable thing to do, or perhaps It arises from the book itself.

If you wish to comment please see Is God Just? on Jesus Creed.