And Then God Speaks … About Creation

The climax of the book of Job comes when Yahweh answers Job, or more accurately instructs Job, from the whirlwind in Chapters 38-41. This long series of posts, and the careful interaction with recent commentaries by John Walton (Job (The NIV Application Commentary)) and Tremper Longman III (Job (Baker Commentary on the Old Testament Wisdom and Psalms)), has led us to this climactic passage. God’s response to Job is a powerful passage, and one that has, it seems to me, significant implications for the way we are to understand God and his interaction with his creation.

There are at least three major points that stick out as I’ve listened to this passage multiple times and read the translations, insights, and interpretations presented by Walton and Longman. Rather than try combine these ideas all in one long post, we will consider each one separately in individual posts.

First, Creation. When God speaks to Job, he does so by pointing to creation. The nature of the world and the origin of the world.

God’s initial set of questions continues through chapters 38 and 39. They all focus on creation and the nature of the world. In fact, the book of Job provides one of the major creation narratives found in scripture. Longman comments on this aspect of the text, but Walton concentrates a good bit of discussion on the nature of the description of creation.

The description of creation starts off with language common to the act of building a house or a temple with measurements set, bases sunk. and a cornerstone laid. Izak Cornelius in his chapter on Job in The Minor Prophets, Job, Psalms, Proverbs, Ecclesiastes, Song of Songs (Zondervan Illustrated Bible Backgrounds Commentary) provides more insight.

Creation is described like the construction of a building, the foundations and cornerstones are laid. The link between creation and building terminology is reflected in the ancient Near Eastern temple, which was seen as a reflection of the cosmos. (pp. 292-293)

In ancient Near Eastern art, deities are often depicted holding a measuring rod and line as symbols of authority, because they are the builders of temples, palaces, and kingdoms. (p. 293)

And Walton emphasizes that this is not simply poetic expression – the explanation for such language about creation that modern Christians are wont to prefer.

Because of this passage’s poetic nature, we can appreciate these statements as poetic, in contrast to our modern cosmic geography, and thus dispense with questions of scientific accuracy. But in the ancient world, this poetry expressed the reality of common understanding, not just metaphors severed from genuine perception. (Walton p. 400)

The text does not provide scientific information. God as speaker in the text does not provide scientific information. Nor does either the text, or God as speaker, correct ancient Near Eastern misconceptions regarding nature, physics, and cosmic geography. The text uses ancient Near Eastern ideas familiar to the audience to make theological points. In fact Walton emphasizes that “it is primarily in theological matters that he pushes them beyond their cultural understandings.” (Walton p. 400) And he also notes that the description of creation here is not “ex nihilio” or out of nothing. Although God is creator of the universe, and everything in it, the ancient Near Eastern focus was not on material creation.

It should also be noted that this passage is a discussion of Yahweh’s work as Creator, yet it deals not with manufacturing matter out of nothing, but with bringing organization and order to the operations of the cosmos. This supports what I have contended elsewhere, that in the ancient world people thought of creation largely in functional rather than material terms. (Walton p. 400)

The words of Yahweh describing creation speaks the language of the ancient Near Eastern culture that the audience understood. 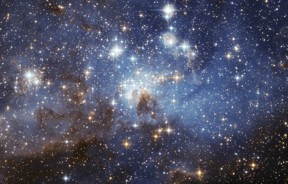 The sons of God and the morning stars. Another example can be used to highlight the role of cultural understanding in the description of creation found in Job 38-39. Walton comments on v. 7 where the “sons of God” are cast in parallel with a reference to the morning stars who sang for joy. The term translated by Longman “sons of God” is translated by the NIV “angels.” The phrase, however, is bene ‘elohim which Walton notes, in agreement with Longman, is literally “sons of God” – the same phrase used in Genesis 6:2,4 where the NIV does translate it “sons of God.” This phrase is also related to the phrase bene ‘elim used in Psalm 29:1 where the NIV translates it “heavenly beings” and the NASB translates it “sons of the mighty.” The latter phrase is also in Psalm 89 – Walton references 89:7 but I wonder if he meant 89:6?

Walton sees the “sons of God” as members of the divine council. The term bene ‘elohim is also used in Job 1:6 and 2:1 when the bene elohim, with the accuser (or challenger, haśśāţān) in their midst, come before Yahweh. Texts outside the Old Testament give support for the connection of the “sons of God” with functionaries in the divine council. The divine council comes up implicitly or explicitly in a number of Old Testament passages, most obviously 1 Kings 22:19-23. In his discussion at the first occurrence in Job 1 Walton notes:

The parallel construction between stars of morning and the sons of God in Job 38:7 represents a common parallel in ancient Near Eastern literature. The stars have a divine nature and gods are considered stars. Walton suggests that the construction of this passage is shaped to the understanding of the audience to communicate the message.

In Ugaritic texts, the “sons of El” or “sons of the gods” are parallel to the “assembly of the stars” In this way, Yahweh’s speech reflects common thinking in the ancient world. The difference is that in Israelite theology, the divine council (= sons of God = heavenly host = stars) is not composed of gods with whom Yahweh shares divine authority, though he may at times delegate tasks to them. (Walton pp. 400-401)

Yahweh doesn’t reveal that the morning stars are actually balls of gas undergoing nuclear fusion producing helium from hydrogen and giving off energy (photons, light) in the process.  (And he doesn’t tell them of the planet or two in the bunch.) The text lets the ancient Near Eastern view of stars as heavenly beings stand, but twists the idea theologically. The stars sang for joy and the sons of God shouted gleefully as Yahweh founded the earth. And Job wasn’t there.

Job 38 is a creation narrative. It affirms that Yahweh is the Creator. It uses ancient Near Eastern ideas, the common approach throughout the Old Testament whenever Creation is described or discussed.

There is no new scientific revelation in scripture.

How does Job 38 help us understand Creation in the context of the Old Testament?

If you would like to comment please see And Then God Speaks … About Creation at Jesus Creed.