The book of essays by Dorothy Sayers Christian Letters to a Post-Christian World reprinted as The Whimsical Christian contains an essay entitled “A Vote of Thanks to Cyrus.” In this essay Sayers reflects on the way we classify different kinds of literature – in particular the implicit, even unconscious, distinctions we make between the bible, classics, and history.

I owe a certain debt to Cyrus the Persian. I made his acquaintance fairly early, for he lived between the pages of a children’s magazine, in a series entitled Tales from Herodotus, or something of that kind. … Cyrus was pigeon-holed in my mind with the Greeks and the Romans.

So for a long time he remained. And then, one day, I realized with a shock as of sacrilege, that on that famous expedition he had marched clear out of Herodotus and slap into the Bible. Mene, mene, tekel upharsin – the palace wall had blazed with the exploits of Cyrus, and Belshazzar’s feast had broken up under the stern and warning eye of the prophet Daniel. (p. 49) 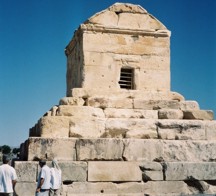 The image to the left, obtained from wikipedia where you can find it with better resolution, is the purported tomb of Cyrus located in modern day Iran. For Sayers the connection between history and the Bible resulted in a reordering in thinking about scripture and the nature of the Bible in the text we have. It became a real book not a magic book separated from real life.

The book of Esther and the identification of King Ahasuerus with Xerxes provided another example where Sayers that she could not neatly separate “Bible” from “classics.” The Bible is not something special and separate. History is all of a piece and the Bible is grounded in the same soil as the classics. This is not to eliminate God from the picture by any means – but to realize that God interacted with the real world, their world and our world.

Most children, I suppose, begin by keeping different bits of history in watertight compartments, of which “Bible” is the tightest and most impenetrable. But some people never seem to grow out of this habit – possibly because of having never having really met Cyrus and Ahasuerus (or Xerxes). Bible critics in particular appear to be persons of very leisurely mental growth. Take, for example, the notorious dispute about the Gospel according to St. John. (pp. 50-51)

Sayers continues on to describe an approach to the Gospel of John and how those who practice Biblical criticism have taken an approach long since rejected in the study of other literature from the classical period. She pokes fun at some of the arguments and what she sees as their shortcomings and forays into the irrational. Biblical criticism was, she found, still locked into dismantling and distrusting the text long after other areas of study had emerged from the fad. This seems no less true today than it was some sixty years ago when Sayers wrote.

When it came to the Bible, the spirit of destruction was the more gleefully iconoclastic because of the conservative extravagances of the “verbal inspiration” theory. But the root of the trouble is to be found, I suspect (as usual), in the collapse of dogma. Christ, even for Christians, is not quite “really” real – not altogether human – and the taint of unreality has spread to His disciples and friends and to His biographers; they are not “real” writers, but just “Bible” writers. (p. 53)

Christ for Christians should be real, very down to earth real. The message of scripture and the power of the incarnation is in the real humanity of Christ, the notion that God became man, that God speaks to us in scripture and through the Spirit in a fashion that is grounded in everyday reality. The celebration of the birth of Christ at Christmas is a time to reflect on the earthy groundedness of Christian faith. Immanuel, God with us, is not some abstract ethereal concept separate in some fashion from real life, but a flesh and blood child at a particular time and place in history, for a purpose.

We don’t have a picture of Bethlehem (well actually we do, but only of the modern streets, the Church of the Nativity, and something like a “Santa” type parade), but the picture to the right shows my kids, about a week before Christmas 2001, in one of the houses at Tel Be’er Sheva.

“Altogether man, with a rational mind and a human body -.” It is just as well that from time to time Cyrus should march out of Herodotus into the Bible, for the synthesis of history and the confutation of heresy. (p. 54)