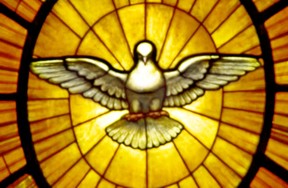 Perhaps the most neglected and disputed aspect of Christian faith is the person and role of the Holy Spirit. We (most of us anyway) will recite the Apostle’s Creed with sincerity and affirm a Trinitarian doctrine of God as Father, Son, and Holy Spirit.

I believe in God the Father Almighty, Maker of heaven and earth.

And in Jesus Christ his only Son our Lord; who was conceived by the Holy Spirit, born of the Virgin Mary, suffered under Pontius Pilate, was crucified, dead, and buried; he descended into hell; the third day he rose again from the dead; he ascended into heaven, and sits at the right hand of God the Father Almighty; from whence he shall come to judge the living and the dead.

I believe in the Holy Spirit;

the communion of saints;

the forgiveness of sins;

the resurrection of the body;

and the life everlasting. AMEN.

God the Father, Creator of heaven and earth is rather clear. Jesus Christ is the center of Christian faith. Yet the nature of the Holy Spirit, and the gifts of the Holy Spirit remain somewhat enigmatic, poorly understood, and controversial. This is almost an after thought in some areas of Protestantism. Of course charismatic Christianity is growing, both here and in the broader world, yet some see this as a problem rather than a cause for rejoicing.

Thanks to a reader who brought up the British radio series Unbelievable in a comment, I’ve been taking a hiatus from listening to the Bible on my commute and have instead been listening to a selection of podcasts from this program. No doubt several of these will work their way into my posts over the upcoming weeks. One of the podcasts, Debating the charismatic church & MacArthur’s Strange Fire or here, dating from Nov. 23rd, shortly after John MacArthur’s conference, featured a discussion between Doug Wilson and Adrian Warnock. Both of these men affirm reformed theology, but with quite different views of the action of the Holy Spirit in the world today. Adrian Warnock is charismatic while Wilson takes a cessationist position.

To paraphrase Wilson, … the gifts of the Spirit were a first century phenomenon necessary only until we received the final, perfect, closed Canon as the authoritative Word of God. In fact it seems that the primary (although not sole) role of the Holy Spirit in the early church was to inspire Scripture. The gifts of the Spirit served to authenticated apostleship.

Warnock agrees that the canon of Scripture is closed and that the Holy Spirit will not inspire new Scripture, but disagrees with Wilson on much of the rest. The discussion was quite civil and interesting.

Science and the Spirit. The Holy Spirit and gifts of the Holy Spirit may seem distinct from my more typical discussions of science and Christian faith, however, I think they are deeply intertwined. The experienced reality of the supernatural lies at the very heart of many of our debates and disagreements.

Many in our Western culture view the reality of the supernatural as simply wrong, a myth we’ve outgrown. There is an attitude that rational people realize this. Discussions of the virginal conception (or virgin birth), incarnation, and resurrection generally reflect this naturalism.

Ironically, many Christians implicitly reinforce this idea. The reality of the supernatural is defended as a rational argument required by Scripture, and as a litmus test for true faith, rather than as an experienced reality. Arguments that connect young earth creation and a global flood with belief in the resurrection fall into this category. We believe in both, so we are told, because the Bible tells us so. If one is rejected, there is no foundation for the other. (… ridiculous!)

Most protestants (including Wilson) will not deny the Holy Spirit or the work of the Holy Spirit (albeit carefully constrained), yet many view the work of the Spirit with a touch of skepticism. In large part this skepticism arises from the inherently personal and subjective experience of the Spirit. It seems far safer (and more rational) to trust in the Holy Authoritative Written Word of God as final authority than to trust in the ongoing work of the Spirit. This strikes me, in some respects, as a sterilized, enlightenment, rationalist view of God. Wilson emphasizes toward the end of the discussion that he doesn’t take a deist view, although he believes the gifts of the Spirit are no longer necessary and have ceased. This is a fairly common response. Stopping short of the complete disavowal of the supernatural, or relegating God to a deist first cause, we really don’t trust the supernatural or the Spirit as experiential. We intellectually affirm the supernatural but distrust experience.

Perhaps we struggle as Western Christians with the nature and power of the Spirit because of a quest for absolute certainty and authority. We created artificial divisions of agency – nature, Spirit, human – and find authority in none of these. Within Protestantism authority has been invested in a book – sola scriptura – as (perhaps) the only “sure” thing. But this is not the practical reality of the church (see Christian Smith The Bible Made Impossible for example) or of the first three quarters plus of church history AD 50 to 1600 give or take a hundred years or so (the flexibility is intentional, no change is abrupt).

Let me put up a suggestion for discussion. The canon of Scripture, has been given not to replace the Spirit or to provide absolute authority, but to allow the community of the Church to have record of the work of God in Israel and of the experience and growing understanding of those who saw the Messiah in life, death, and resurrection. It is not a law book of propositions and facts, but the story of God’s interaction with His creation. This means that we must be immersed in the entire sweep of Scripture from Genesis through Revelation, including the boring parts. Short little excerpts won’t do. We must also come together as a community to listen to those among us who have insights into the culture and times recorded in Scripture (linguists, anthropologists, and historians).

Scripture doesn’t replace the Spirit, but immersion in the story of Scripture in the community of the church provides the foundation for discernment. It lights the way, but doesn’t provide the foundation or the experience.

The gifts of the Spirit are real even today … wisdom, knowledge, faith, healing, miracles, prophecy, discernment, speaking in tongues, interpretation of tongues, teaching, helping, guidance, … and given for the common good, practiced in and for community. (e.g. 1 Cor 12)

Is the importance of the Spirit underestimated in much of evangelicalism? Western Christianity?

What is the role of the Spirit today?

Another reader recently directed me toward a book The Spirit in Creation and New Creation: Science and Theology in Western and Orthodox Realms edited by Michael Welker. This book contains a series of articles by both Western and Orthodox Christian thinkers exploring the role of the Spirit. In the upcoming weeks I will post on a number of the articles in this book.