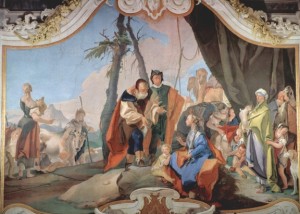 Last Tuesday I put up a post addressing the supposed revelation that camels in Genesis prove scripture wrong (The Mighty Mysterious Camel). Headlines include such memorable tags as “the camel that broke the bible’s back.” Despite the claims made in many of the media reports the late date for domestication of camels and the challenge this poses for Genesis is nothing new. Many scholars, not just skeptical or liberal scholars, see the camel as anachronistic, an addition by a later redactor fleshing out the story. Pete Enns has a nice post on this as well (everybody…put the camel bones down and step away before someone gets hurt). Anachronisms are not unusual in stories that are told and retold. The picture above is a depiction of Rachel and Laban from Genesis 31 as painted in the 18th century. That the camel might be a later addition doesn’t really concern me as the camel is not in any way central to the story. Any other beast of burden would suffice.

The camel does raise some concerns however, and one of the commenters put a couple of them quite well.

Concerns/Questions: 1) the “world” obviously sees this as a blow to the faith (as the headlines indicate). We may see it as an incidental, but it does not. Do we need to, from now on, go into lengthy descriptions with those outside the faith (or struggling with the faith) on how Scripture came together? In a world short on attention, that may be challenging.

These are great questions worth some serious discussion.

1) the “world” sees this as a blow to the faith. I think that there are a couple different cultural threads that underlie this concern. The “world” sees this as a blow because there is a perception of what the Bible should be that is incorrect. This isn’t imposed by “the world” but comes primarily from within the church. The solution is not a lengthy descriptions with those outside the faith, but better education of those within the faith.

The “world” also sees this as a blow because there is a prevailing tendency to think in cut and dry alternatives whenever possible (and even when not possible). This is especially true in debate – where there is no room for nuanced and sophisticated explanations. Camels prove that scripture is a fabricated story the same way carbon-14 dating of coal deposits prove that the earth is young. They don’t. Radiometric dating is a rigorous method, but it needs intelligent sophisticated application. This sophistication in understanding the limitations and sources of error, despite the claims of some young earth creationists, is not an attempt to brush the truth under the rug. Likewise our approach to scripture needs some sophistication. Camels in Genesis tell us something about the nature of the text we have, and discussion of this in terms of the formation and redaction of the text is not backpedaling, but the only effective way to move forward. We need to understand scripture in its context, not the context we expect it to have.

And this leads to the second question.

2) how do we define “incidentals”? This question gets to the root of the problem. First and foremost we must be immersed in scripture. Not a theory about scripture, not a theology derived from scripture, but in scripture itself from beginning to end. There is no way to have a reasoned view of “incidental” features without a thorough grounding in the whole sweep of scripture.

We need to read scripture publicly and regularly in substantive chunks as a part of our worship. Only by so doing will we build in our church an appreciation of scripture. If it is not worth a place on the stage in our worship why in the world would the average Christian in the pew or the child growing up in the church think it is an important part of Christian life?

We must teach and emphasize the study of scripture in our churches. This cannot happen in the Sunday morning service. There isn’t enough time, the audience is too diverse, and it requires an opportunity for real discussion, questions, and interaction. Discipleship education is not secondary to formal worship, it is one of the most important roles of the church … for all ages … in multiple forms. In my opinion (take it for what its worth) one of the most pernicious myths in the church today is that success is measured by the number of unique spectators in the seats for a Sunday morning service. Success is measured in the formation of disciples of Jesus Christ. This doesn’t happen (often) through a fairly passive 55 minute experience.

A thorough grounding in the sweep of scripture begins with a knowledge of the basic stories, the primeval history, the call of Abraham and the patriarchs, the exodus, conquest, judges, kings, exile, return from exile, John the Baptist, Jesus, the church. … But then we need to go deeper.

Start with Isaiah. My perspective on the path to a deeper understanding has changed dramatically over the last couple of years. Five years ago I would have brushed off the prophets as of marginal importance, except perhaps Isaiah, but only the so-called Messianic passages concerning the suffering servant. Otherwise they are not particularly important in the creation, fall, redemption, new creation narrative. Right? But creation, fall, redemption, new creation is a rather unfortunate (and recent) truncation of the sweep of scripture. Today I think we need to start with Isaiah, then Jeremiah, Ezekiel and on through to Malachi. The climax of scripture is the incarnation, life, death, and resurrection of Jesus, God’s Messiah, but the fulcrum of scripture is found in the prophets, and not just, or even primarily, in the Messianic prophecies, but in the whole sweep of the prophets.

The prophets point to the gospel and the Gospels allude back to the prophets, constantly.

Paul and the other teachers in the early church were immersed in the writings of the prophets and they echo through Paul’s letters, and many of the other epistles as well. Even Paul’s reference to the potter and the clay in Romans 9 takes a slightly different nuance in the context of Isaiah and Jeremiah where the same image is used. Surely Paul was aware of this as he chose his words. And I’ve written on the way the prophets impact the interpretation of Romans 8 before (Creation Groans; But Why?).

Echoes of the prophets reverberate throughout Revelation.

The Old Testament scriptures were shaped into the form that we have around the time of the prophets and the exile or later and the concerns of the prophets shape the way that the story is told.

Back to the Camel. I don’t find the camel – whether actual or from a later fleshing out by a redactor – significant because the sweep of scripture is in the God’s call of his people and the failure of God’s people to forsake idols and follow God alone, the failure of God’s chosen people to love the Lord their God with heart, mind, soul, strength and to love their neighbor as themselves. This rests on the back of a camel?

In the story of Rachel and Jacob we read (Gen 31):

Now Rachel had taken the household gods and put them inside her camel’s saddle and was sitting on them. Laban searched through everything in the tent but found nothing. Rachel said to her father, “Don’t be angry, my lord, that I cannot stand up in your presence; I’m having my period.” So he searched but could not find the household gods.

The camel and the camel’s saddle are incidental to the story – that Rachel took the household gods is not, or so it seems to me. This is a portent to the entire sweep of scripture. The impact of idols, Asherah poles, high places, Ba’als, the detestable god Molek, such as these permeate the story.

Returning to the commenter’s question, the exodus and king David are not incidental to the sweep of scripture, although we can ask questions about some of the details of the way these stories are told. The resurrection is essential to the fulfillment of scripture in the New Testament, but should we really worry about the fact that the details of the four Gospel accounts are somewhat different?

What do you think.

Should we start with the prophets to understand the sweep of scripture?

If not where should we start?

He has shown you, O mortal, what is good.
And what does the Lord require of you?
To act justly and to love mercy
and to walk humbly with your God.