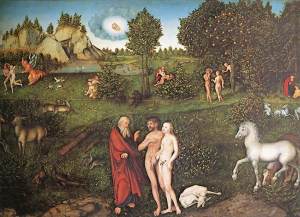 The fifth chapter of J. Richard Middleton’s book The Liberating Image: The Imago Dei in Genesis 1 considers the ways in which Genesis 1-11 critiques the Mesopotamian ideology. This chapter is worth a couple of posts – the first will focus on Genesis 1-10 and the second will consider chapter 11 and the Tower of Babel Story as the culmination of the primeval history moving into the story of Abraham.

The primeval history in the first 11 chapters of Genesis has a distinctive Mesopotamian background. (There may be elements from other influences as well, including Egyptian elements, but Middleton doesn’t bring these into the discussion.) To properly consider the meaning of the Image of God in Genesis 1:26-27, 5:1, and 9:6 requires the entire primeval history.

It will be useful, therefore, to explore how Genesis 1-11 as a complex literary unit (undoubtedly composed of different sources) articulates a worldview (and especially an understanding of being human) alternative to that of ancient Mesopotamia, precisely by utilizing various Mesopotamian ideas and motifs. (p. 185)

The Mesopotamian ideas and motifs are transformed in Genesis in a profound and subversive fashion.

It is my discernment that the distinctive biblical insight into God’s purposes for justice in the world, an insight initially forged in the crucible of Egypt and Canaan, is applied beyond its original cultural context to a critical engagement with Mesopotamian ideology in the literature of Genesis 1-11 (with its discernible Mesopotamian motifs). This engagement, which involved recontextualizing the stories of Israel’s election, deliverance, and covenant in terms of universal human history (and ultimately in terms of the creation of humanity and the cosmos), was accomplished through the use – and subversive transformation – of elements of Mesopotamian ideology, especially those that articulated an understanding of the purpose and status of humanity in the world. (p. 195-196)

What is the significance, though, of this subversive transformation of Mesopotamian ideology? Middleton goes into more detail, but the general thrust is that the cultural influence of Mesopotamia was pervasive throughout the ancient Near East. The cultural authority of Mesopotamia might be likened to that of the USA in North America (or beyond) and Middleton, who was raised in Jamaica and then moved to Canada makes this comparison. The danger for the original Israelite audience was the temptation to “buy into” Mesopotamian ideals … in particular “its demotion of ordinary human beings to the status of lowly servants of the gods, thus legitimating a fundamentally unjust social order as the divine will.” (p. 201) Genesis 1-11 is, in Middleton’s reading, “an intentional response to Mesopotamian cultural ideals.” I will suggest – although Middleton doesn’t go here explicitly it is important to be explicit for many Christians – that it is a divinely inspired subversion of Mesopotamian cultural ideals. The “fact or lie” mindset of modern evangelicals is rather unfortunate and limiting. The message of Genesis 1-11 was clear to the original audience and, while generally clear to us as well, is deepened and strengthened by an understanding of the context.

Genesis 1. God granted a royal-priestly identity as imago Dei to all humanity at creation. This undermines the absolute authority of the king and delegitimizes the royal and priestly social structure. Middleton (and he is not alone) sees a fundamental mutuality in the shared human task. The imago Dei encompasses all humans, male and female, simply by being human. This has consequences.

[T]he democratization of the image suggests that human beings do not need institutional mediation of God’s presence by either kings or priests. … The later Christian doctrine of the “priesthood of the believer” may thus be understood as legitimately grounded in the imago Dei. This doctrine articulates what we might call the redemptive restoration of the fundamental priesthood of humanity as imago Dei, after its distortion and diminution by sin. (p. 207)

While there is certainly a call in scripture for humankind to worship God and to serve him in some fashion, humans were not created to satisfy God’s needs – especially not needs for food and housing.

The rhetoric of the text, both by what it explicitly says and by its omissions, highlights the radical distinction between oppressive Mesopotamian notions of human purpose (bond servants to the gods) and a liberating alternative vision of humanity as the royal-priestly image of God.

God is not threatened by human overpopulation. Humans are gifted with fertility and commissioned to fill the earth. God graciously provides food for both humans and animals. 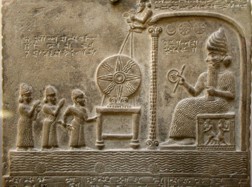 Many have noted that the creation of the sun, moon, and stars and the fact that the text of Genesis 1 simply calls the sun and the moon the greater and lesser lights rather than giving them names is a direct contrast to ancient Near Eastern views of these as divine beings and gods. Although I’ve most often heard this in contrast to the Egyptian sun god Ra, Middleton points out the contrast with Mesopotamian gods. Astral religion which gave rise to astrology was prominent in ancient Mesopotamia. In Genesis the sun, moon and stars are merely creatures. The fact that the sun is not named prevents the Hebrew for sun (šemeš) from being confused with the Akkadian word for the sun-god Shamash (šamaš). Not only are the sun and moon unnamed creatures – “the luminaries serve humanity by giving light and providing a temporal framework of days and seasons.” Finally, the understated way that stars are placed in the sky in Genesis 1:16, almost as an afterthought, subverts the importance of the stars in the Mesopotamian pantheon.

The Affrimation of Human Agency. The affirmation of humankind and human agency extends beyond Genesis 1 into the entire primeval history of Genesis 1-10. While we are most familiar to the reference to the image and/or likeness of God in Genesis 1, it is significant that Genesis 5 begins with this idea as well.

This is the written account of Adam’s family line.

When God created mankind, he made them in the likeness of God. He created them male and female and blessed them. And he named them “Mankind” when they were created.

When Adam had lived 130 years, he had a son in his own likeness, in his own image; and he named him Seth.

Adam as the progenitor of the human race was created in the likeness of God and he passed down this image and likeness to his son Seth. In ancient Mesopotamia culture as portrayed in the king lists the kingship was lowered from heaven. In Genesis the entire human race is singled out with the same dignity.

Genesis 9:6 again calls out the importance of the image of God.

And from each human being, too, I will demand an accounting for the life of another human being.

“Whoever sheds human blood,
by humans shall their blood be shed;
for in the image of God
has God made mankind.

The significance of the primeval history goes beyond explicit reference to the imago Dei.

The function of many ancient Mesopotamian texts was to ground reverence for the king and the social structure in creation itself. This is not true of Genesis – where the dignity of image applies to all mankind.

Genesis also assigns cultural achievements to humans rather than to the gods. In the ancient Mesopotamian literature humans are often depicted as primitive and uncivilized until elevated by the gods. In Genesis the first city is founded by a human being, humans are assigned to the invention of metallurgy, music, and nomadic livestock herding, a human plants the first vineyard, and a human is the first warrior.

This emphasis on the human role in sociocultural innovation is an important feature of the primeval history, which portrays humans in the process of exercising their fundamental vocation of transforming the world by the historical agency granted them at creation. (p. 217)

Sin taints this flourishing, but the distinct contrast to the Mesopotamian cultural context remains. The absence of a royal institution is striking, and of significance.

[T]he primeval history portrays a world without the institution of monarchy. While this would be literally unthinkable in Mesopotamian civilization (or indeed in any of the high cultures of the ancient Near East), on this point Israel’s historical narrative is clear: Israel’s own monarchy originated by human, not divine, decision in the tenth century B.C.E. and was initially opposed by YHWH.

While God promises a king from David’s line to rule forever, the monarchy itself was a failed experiment. It did not stop the injustice of the period of the Judges but eventually increased this. Middleton does not make the connection in the chapter – but as Christians we believe that the promise to David was fulfilled by God himself in the incarnation and in a form far different than the typical view of a royal monarchy. Jesus came not to be served but to serve, and this is the model for all human leadership as well.

Human Failing and the Misuse of Power. Human achievement in the primeval history is not all positive. Humans also rebel from God, invent murder, violence against women, revenge, drunkenness, incest, and war. “The culture that humans develop is profoundly intertwined with violence.” (p. 220) The flood is portrayed as restorative, not because God is threatened by human overpopulation or annoyed by human noise, but because God is grieved by human violence. Genesis 9:6 after the flood explicitly connects the creation of mankind in the image of God with the prohibition of murder.

The question of the genre of Genesis 1-10 often obscures the message and focus of this text. We concentrate on questions of science and history to the neglect of the shape and focus of the text. While the message of the text could, in principle, be consistent with the kind of literalistic historicity many assume, it is not devalued or undermined by the possibility of other genres or forms. In fact the message may be strengthened precisely by appropriating and subverting the stories of the surrounding culture.

Middleton sees the entire primeval history in Genesis 1-10 as connected around the concept of humans created in the image and likeness of God with a royal-priestly mission to flourish and fill the earth. In this it subverts and critiques the overwhelming cultural narrative by which Israel was surrounded.

We will turn to Genesis 11 and the Tower of Babel in the next post. But for now …

What is the purpose of the primeval history of Genesis 1-10? Does Middleton’s focus make sense?

What is the significance of this history as it leads into the election of Abram and the calling of Israel?

What is the significance for us as Christians?

This entry was posted in Creation, Genesis, Image of God and tagged J. Richard Middleton. Bookmark the permalink.
%d bloggers like this: