Down to Earth Hope 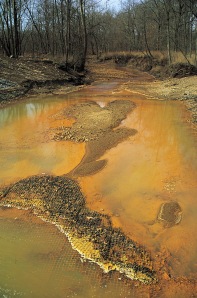 I consider that our present sufferings are not worth comparing with the glory that will be revealed in us. For the creation waits in eager expectation for the children of God to be revealed. For the creation was subjected to frustration, not by its own choice, but by the will of the one who subjected it, in hope that the creation itself will be liberated from its bondage to decay and brought into the freedom and glory of the children of God. We know that the whole creation has been groaning as in the pains of childbirth right up to the present time.

The next chapter in Let Creation Rejoice: Biblical Hope and Ecological Crisis by Jonathan Moo and Robert White turns to Paul’s description of creation and especially to Romans 8 – creation groans as in the pains of childbirth. They connect this passage to Genesis 3, but even more significantly to the prophets, especially Isaiah 24-27. Moo has an article in New Testament Studies on this connection, Romans 8.19–22 and Isaiah’s Cosmic Covenant. There are also echoes of connection to Hosea, and to Jeremiah in Romans 8 although Moo and White don’t connect the passage to Jeremiah in this chapter of their book.

In Romans 8 Paul assumes that his audience is aware of the broader biblical story including the first chapters of Genesis. He refers to Adam in Romans 5 and in a number of other letters, so it isn’t unreasonable to assume that Paul is alluding to the curse of Genesis 3 in Romans 8, at least in part. Most commentators on the passage seem to stop here and ignore the other biblical contexts for Paul’s statements leaving us with a rather flat (and I think largely wrong) interpretation. Moo and White move beyond this to the far richer description of an ongoing curse depicted by the Prophets. These passages were also part of the broader biblical story Paul assumed as he wrote the letter to the Romans.

Paul, however, like the Old Testament prophets before him, goes further in describing how creation’s subjection to now-fallen humanity means that the entire creation is subjected to ongoing frustration, finding itself in “bondage to decay” (Romans 8:21), enslaved to ruin. (p. 105)

We tend to worry about using anthropomorphic language to refer to creation – for theological and/or scientific reasons.

Paul has no such qualms. He is able to draw on a rich biblical tradition of letting nonhuman creation have its own voice, a voice that is heard praising God throughout the Psalms, bearing witness to the covenant between God and his people in the Prophets and, as here in Romans 8, crying out – groaning even – when creation suffers the results of humankind’s corruption.

Paul is in fact echoing the language of Isaiah 24-27, a passage that he uses in his extended defense of the hope of resurrection in an earlier letter, in 1 Corinthians 15. He alludes to the same passage again in his description of life after death in 2 Corinthians 5:4. Just as Paul does in Romans 8, Isaiah 24-27 emphasizes both the present devastating effects of human sinfulness for a mourning earth and also the cosmic extent of the judgment and new creation to come. (p. 105)

Isaiah 24 connects the curse of the earth to ongoing human rebellion – the curse was not a one-off event at the origin of the human race. The earth continues to groan as a consequence of human activity and human failures.

The earth dries up and withers,
the world languishes and withers,
the heavens languish with the earth.
The earth is defiled by its people;
they have disobeyed the laws,
violated the statutes
and broken the everlasting covenant.
Therefore a curse consumes the earth;
its people must bear their guilt.

The curse continues, but creation will be redeemed. Moo and White point out that the curse continues today and at least part of this is because we continue to fail. There is a hope for the future, but it is an already/not yet kind of hope. The Old Testament speaks extensively about the problems of idolatry. The New Testament extends idolatry by connecting it to greed and covetousness (Eph 5:5 and Col 3:5). Because of these passages and others many Christians view idolatry as including the worship of material possessions. This connects to the curse on the earth arising from human activity. Ecological devastation when it happens and the potential for ecological crisis is part of this curse because it puts something other than God and the great commandments (love God and love each other) at the focus of human purpose.

In the light of what Paul says in Romans, our consumer societies actually hinder the material creation itself from fully glorifying God because we have hijacked it for selfish (and therefore sinful, hence empty) ends. (p. 108)

And a little later Moo and White are explicit in their view:

When we read Romans 8 today, we cannot help but see – and indeed ought to see – creation’s groaning reflected in our current ecological crises …, especially now that the truly global consequences of our actions for the rest of creation have become so evident.

If the biblical picture of humankind’s role within creation once appeared naive to some for the way in which it assigns such profound responsibility for the earth to one species, it no longer appears so – not in an age when human beings are having such widespread effects on the earth that scientists have begun to call it the “Anthropocene,” or “Age of Man.” The need for us to take seriously our responsibility for the creation has never been greater, and the potential consequences of the failure to exercise our responsibility well have never been so cataclysmic. (p. 109-110)

It isn’t that we should leave the earth in a pristine form untouched by human hands or unused. Rather we need to realize that creation has a purpose and a future and that our actions can and do make a difference. Paul tells us that it matters what we do with our bodies because they were bought with a price You are not your own; you were bought at a price. Therefore honor God with your bodies. (1 Cor 6:20) This despite that fact that Paul can later write that flesh and blood will not inherit the kingdom of God, that we hope in resurrection. Likewise Romans 8 puts to rest the idea that creation is disposable, consumable, and without a future. According to Moo and White:

What Paul tells the Corinthians about treating their physical bodies as valuable to God therefore can also be seen to apply to the entire creation. The way we treat creation matters. (p. 112)

This affirmation of the continuing value and future of creation should provide the foundation for a radical Christian environmental ethos.

Is creation subject to futility because of a one-off human sin (Genesis 3) or through continuing human sin and idolatry?

Does Romans 8 tell us that this creation will be redeemed and restored?

Should Romans 8 lead us to a Christian environmental ethos?

This entry was posted in Creation, Environment, Environmentalism, Paul and tagged Jonathan Moo, Robert White. Bookmark the permalink.
%d bloggers like this: