It’s About God and God’s Kingdom 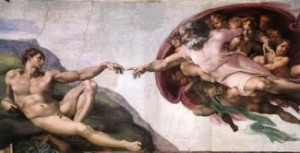 The second essay in N. T. Wright’s book Surprised by Scripture addresses the question Do We Need a Historical Adam? Wright accepts a historical Adam and Eve as a representative pair chosen by God, much as God later chose Abraham and Israel. The need for a historical Adam is much the same as the need for a historical Israel. This is the way the story is told, and the way God worked in the world. (My interpretation, Wright never put it quite like this.) The significance of Adam isn’t as progenitor of the human race or as originator of sin. Rather, the significance of Adam is in his vocation to be God’s image bearer in the world and in his failure to live up to this vocation.

In any discussion of Adam the key passages to consider are the passages written by Paul in Romans 5 and 1 Corinthians 15. In Romans 5 Paul draws a contrast between Adam and Jesus: “For just as through the disobedience of the one man the many were made sinners, so also through the obedience of the one man the many will be made righteous.” (v. 19) This comparison leads many to claim a need for Adam as originator of sin, no Adam, no need for Jesus. But this, according to Wright, is to misunderstand Paul’s message.

First Jesus then Paul and Adam. Wright leads into his discussion of Paul and Adam with Jesus and the central message of the Bible.

The central message of the Bible is not simply that we are sinners, but through Jesus God is rescuing us from the sinful world so that we can be with him in heaven. That’s part of it, but it’s not the whole biblical story. The Bible is not about the rescue of humans from the world but about the rescue of humans for the world, and indeed God’s rescue of the world by means of those rescued humans. …

With this idea in mind, we now move to Paul and Adam.

First, Paul’s exposition of Adam in these passages is explicitly in the service not of a traditional soteriology but of the kingdom of God. (p. 33)

This isn’t about how we get saved, but about how God is re-establishing us through Jesus as his image bearers in his kingdom.

Romans 5: According to Wright “the great climax of Romans 1-8 is the renewal of all creation.” If we miss this we will miss the point of Romans 5.

For Paul it’s clear: the whole world is now God’s holy land. That’s what scripture prophesied, and that’s what has been achieved in Jesus the Messiah. (p. 33)

What Paul talks about in Romans 5 is not some kind of genetic propagation of sin through the seed of man, but the failure of Adam in his vocation as the image of God. Jesus as God’s Messiah and the faithful one sets this right.

This, you see, is what Paul is really talking about in Romans 5:12-21 … In verse 17, Paul surprises us. “If by the trespass of the one, death reigned through the one,” he says, and we expect him to go on “how much more will life reign through the one.” But he doesn’t. He says, “How much more will those who receive the abundance of grace, and of the gift of covenant membership, of “being in the right,” reign in life through the one man Jesus the Messiah.” Adam’s sin meant not only that he died but that he no longer reigned over the world. God’s creation was supposed to function through human stewardship, and instead it now produces thorns and thistles. Now humans are redeemed to get God’s creation-project back on track. … Paul’s Adam theology is also his kingdom theology, and the author of Genesis would have smiled in recognition. (p. 34 emphasis added.)

1 Corinthians 15 has the same point from a different angle. “Paul’s whole point is to pick up from Genesis the notion of the calling of Adam and to show that it is being fulfilled in the Messiah.” (p. 35) Humans from the beginning (i.e. from Adam) have failed to carry out their God-given vocation as the image of God in his temple … the garden and indeed all of creation.

And it is that complex which the New Testament sees being dealt with, gloriously resolved, in Israel’s messiah, Jesus the Lord, and his death and resurrection. He has dealt with exile, and now the whole world is God’s holy land, with Jesus and his people as the light of the world.

… Certainly the Jews of the Second Temple period would have no difficulty in decoding the story of Adam as an earlier version of their own story: placed in the garden, given a commission to look after it; the garden being the place where God wanted to be at rest, to exercise his sovereign rule; the people warned about keeping the commandment, warned in particular that breaking it would mean death, breaking it and being exiled. It all sounds very, very familiar. (p. 37)

It is this context that leads Wright to his proposal that Adam and Eve were chosen representatives of the whole human race much as Israel was God’s chosen people. It isn’t clear to me that it matters if Adam and Eve were some unique representative pair, or if the story relates the simple truth that humans from the beginning, called by God to be his image bearers in the world, failed.

And this leads to Jesus. God himself did what we could not and cannot. The incarnation is central. Jesus is the faithful human, the faithful Israelite, doing what Adam and Israel did not (could not) do.

All of this projects us toward a full and rich Christology, but not simply of Jesus as both divine and human – that’s a given, but its only a shorthand, a signpost. … He is Israel’s Messiah, who fulfills Israel’s obedience on the cross and thereby rescues both Israel and the whole human race. He does for Israel what Israel couldn’t do for itself and thereby does for humans what Israel was supposed to do for them, and thereby launches God’s project of new creation, the new world over which he already reigns as king. This is the great narrative, and we need to learn to tell it. (p. 39)

It seems at times that Wright suggests that the sin of Adam thwarted (temporarily) God’s plan for creation. I don’t think that this is quite right. God knew from the beginning that humans, Adam and Israel, would be unable to be the obedient image bearers. Jesus as the obedient human, Messiah, Immanuel, God with us, second Adam, shoot from stump of Jesse, was always the plan for the establishment of God’s kingdom. We have to take Colossians 1:15-20 and John 1:1-14 seriously. The Son is the image of the invisible God, the firstborn over all creation. … all things have been created through him and for him. He is before all things, and in him all things hold together.”

Wright’s emphasis on the vocation of Jesus as Israel’s Messiah, who fulfills Israel’s obedience and as the true image of God who fulfills Adam’s calling makes sense of the story where many truncated messages falter. This can, will, and should, preach. Primarily because it is faithful to scripture and to the mission of God in the world.

The point of it all is vocational: if we can study Genesis and human origins without hearing the call to be an image-bearing human being renewed in Jesus, we are massively missing the point, perhaps pursuing our own dream of an otherworldly salvation that merely colludes with the forces of evil, as gnosticism always does. (p. 39)

The message ought never to be simply about “me and my salvation.” It ought to be about God and God’s kingdom. (p. 40)

This is about God and God’s kingdom.

Do we need a historical Adam?

Do we need to understand the origin of human failure as the image bearers of God?

Does Paul, or any other part of Scripture, intend to answer this question?

If you wish to contact me, you may do so at rjs4mail[at]att.net.

If you would like to comment please see It’s About God and God’s Kingdom at Jesus Creed.