I Dare You to Change!

Change is hard. Changing a position on any significant issue involves a disruption of social networks. This disruption can be painful. Today I would like to highlight two projects connected to the BioLogos Evolution and Christian Faith program that deal with the issues surrounding change.

Justin Topp, involved with Craig Story in the project Moving Pastors Toward Scientific Literacy, had an interesting post on the BioLogos blog last week: Creation and Evolution “Research Programs” (And Why It’s So Hard to Change Perspectives). In this post he is focused on analyzing the approaches that different groups take to the questions of evolution and Christian faith and the way these approaches control perspective. To lend context to the discussion he tells some of his story moving from a young earth creationist view to an evolutionary creation approach. The post is well worth reading.

Justin includes a table outlining what he sees as the three core positions or “research programs” at play in the discussion of evolution and creation.

To provide a better context to the reader, I have taken the liberty of constructing what I see are the three main research programs that are most relevant to the creation-evolution discussion for Evangelicals (see table). As a reminder, the “core hypothesis” is a thesis that is unchangeable and to which the researcher commits at all costs. Everything else within the research program is designed to connect (or protect) the core hypothesis to data that supports (or refutes) the central theory. 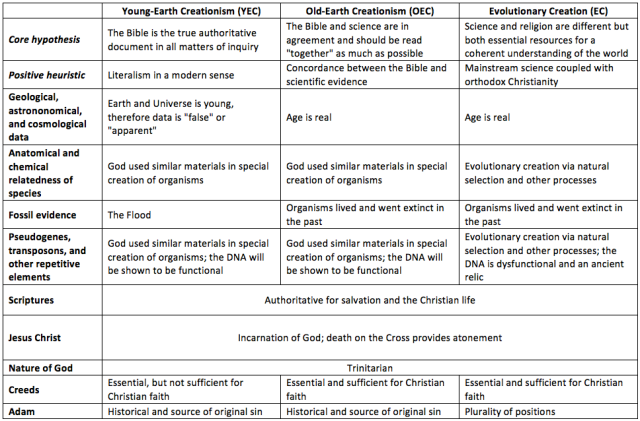 These are broad categories and there are subdivisions within these groups, especially within the evolutionary creation program, but the overall scheme seems accurate. There is substantial agreement on what might seem to be the core issues (Jesus Christ and the nature of God), and even on the authority of scripture, although the hermeneutical approach differs in the three programs. In fact, the approach to an understanding of the Bible and the way it should be interpreted defines the core position of both the young earth and old earth creationist programs. In contrast, the evolutionary creation program is driven less by a specific approach to biblical interpretation and more by a desire (need) to accommodate what are seen as the well supported conclusions of science into a Christian world view. This leads to the frequent charge that those of us who support evolutionary creation are letting science take the drivers seat.

Justin describes a little of his journey from young earth creation to evolutionary creation in his post. My story is different. Although I was raised in a Christian family and in the church I was never a convinced young earth creationist or even a convinced old earth creationist. Our church did not take an official position and the pastor in subtle ways discouraged the young earth position. Still, the underlying approach to scripture was enough to raise issues in my mind. After struggling with the apparent conflicts in college and graduate school I settled into a bracketed approach – science was my vocation and avocation (I am a professor and active in research). Christianity defined my life, but was more-or-less separated from most of my day-to-day life because it seemed impossible to bring the two together. Today I have a much healthier evolutionary creation approach that brings everything together in a much more coherent fashion. My reading and writing, here and elsewhere, is directed toward exploring the issues and figuring out how all this can fit together.

But there are social cost, both in my profession and in the church.

Resistance to Change. Much of what we believe about the interaction between science and Christian faith is driven by social context and ties. This can be driven by positive acceptance and belonging or by negative rhetoric shaping the group, or both. Despite the fundamental agreements, the relationship between those who hold the three positions described above is often less than harmonious. Those who accept the mainstream scientific conclusions often view young earth creationists as ignorant, part of the problem, and a hindrance to faith. Young earth creationists in turn view those who accept evolutionary creation as dangerous, false prophets, and wolves in sheep’s clothing. 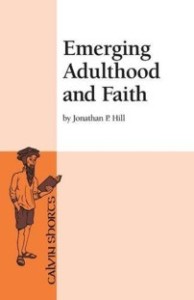 Jonathan Hill, a sociology professor at Calvin College, received funding for his project Support for the National Longitudinal Study of Religion and Human Origins. Jonathan has a new book Emerging Adulthood and Faith derived from his survey research on the faith of young adults. The final chapter of this short book, Blinding Them with Science, focuses on the change (or lack of change) young adults evidence toward questions of evolution and human origins as they move from childhood to adulthood. I may post on more of Jonathan’s conclusions in the future, but for today’s post I want to look only at his conclusions about change.

Most of us don’t make entirely rational data-driven choices about beliefs – whether Christian faith, evolution, global warming, or the need for vaccination. From Jonathan’s book:

When people change their beliefs about human origins, it usually will be found alongside other social changes: Friendship networks, relationships with family members, and participation in certain religious communities are altered as well. It is much more plausible that these social changes are actually the driving force in changing beliefs about the relationship between science and religion. In other words, framing the significant change about beliefs regarding human origins as primarily an intellectual puzzle which individuals deal with in isolation (which is true of both the models that began this chapter) is not the best way to understand the problem. While that model may be true for a select few people who are seriously engaged in the intellectual debates about science and religion, for the vast majority of young people, this is simply not how they arrive at their beliefs.

… People come to accept or reject evolution not as a result of pouring over the details and evidence, but as a symbolic gesture to indicate to others where they belong in the socio-political landscape. This requires understanding that religious beliefs, and beliefs about other contentious public issues, are intertwined with identity and social relationships. Formal science education, for most young people, is unlikely to change this. (p. 56-57)

One take away message from this is that church is incredibly important. It is not simply a place for worship, but a community that shapes people. The structure, priorities, and social environment of a church shapes the way disciples of Christ are formed. This should receive more attention than it often does. More to the point of this post though, any change in the evangelical community on the questions of science and faith will not be driven by logical argument and data alone. It will only come from trust and community.

If you disagree with my evolutionary creation point of view, take comfort in this: if your friendship, family, and fellowship networks are grounded in a more restrictive position, the science that I and my colleagues teach is not likely to have much impact.

Do Justin’s classifications make sense? What might you change?

What drives a change in views on evolution or any other issue? What led you to change your position?

How should the church respond?

The image at the top of the post was taken in Thomas Kirche in Leipzig, where Johann Sebastian Bach was music director and is now buried.

This entry was posted in Conversion, Resources for Discussion, Science and Faith and tagged Jonathan Hill, Justin Topp. Bookmark the permalink.
%d bloggers like this: