Reading the Bible With Evolution in Mind 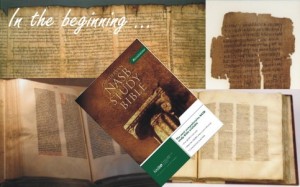 The last substantive section of Gary N. Fugle’s book Laying Down Arms to Heal the Creation-Evolution Divide looks at the regions of (apparent) conflict between evolutionary biology and the Christian Bible. His approach is predicated on the assumption that “we cannot comfortably argue that God created one reliable source of information in the Bible and created a second conflicting, unreliable source in nature.” And he goes on: “This means we should use Scripture to rightly interpret what we observe and experience in nature and, at the same time, allow the natural world to inform us how to rightly interpret the Bible.” (p. 225)  He is convinced that “the bible is inerrant in what God intended to communicate.” (p. 228) But this doesn’t mean that human interpretations are inerrant. In fact the history of the church tells us that human interpretations can go awry, sometimes seriously and sometimes in minor ways. The question of an earth centered vs. sun centered solar system is one such example.

I am not sure if Martin Luther believed the earth was flat with a vault over the top holding back the waters above or not. Nor am I certain how much opposition he gave to the views of Copernicus concerning the solar system. There is a much publicized dinner table quote recorded by a student where he ridiculed the idea that the earth moves (one reference here).  It is important to note that not too many years down the road the University of Wittenberg did teach heliocentrism.  John Calvin may have also ridiculed the idea that the earth moved rather than the sun (Owen Gingerich, at the time Research Professor of Astronomy and History of Science at the Harvard—Smithsonian Center for Astrophysics, gives an example in this article from 2002).

Regardless of Luther’s actual beliefs, the image by Lucas Cranach the Elder accompanying Genesis 1 in Luther’s German translation of the Bible portrays an earth with a firmament and with waters above reflecting the imagery found in the text. This is not consistent today’s understanding of the cosmos.  Few of us find this troubling. Here we have allowed science to teach us how to interpret the Bible, with some fits and starts along the way.

So where do we go from here? There is a universal doctrine of creation derived from Scripture. Fugle outlines the main points: God is one,  God instilled his creation with order, God exists apart from the world and is not limited by it, God is sovereign over all that exists, God’s creative actions culminated in humans.  The last is a place where Scripture teaches something removed from the picture suggested by some scientists. We are not unimportant accidental specs of organic life on an obscure planet in the backwaters of an immense universe. We are God’s image bearers with whom he is in relationship. But none of this depends on the methods or time frame of creation.

Fugle outlines two major approaches to reading Genesis with evolution in mind. We can read the text as entirely figurative or symbolic in nature. Certainly the Bible uses figurative language (If you doubt this try reading Daniel or Ezekiel, or many of the other Prophets). This is a viable option that takes Scripture seriously and does not deny the authority of God behind the text. However, it is not the option that Fugle prefers.

Although the figurative interpretations resolve conflicts with evolutionary theory, we should proceed with caution or we may too readily dismiss real history. … Therefore the second option is to acknowledge that early Genesis passages contain many literary techniques and figurative elements while also retaining the backdrop that they are based on or alluding to real historical events that occurred in the past. In other words, a story may be constructed to emphasize specific messages about a historic event without providing  precise chronological or factual details. In contrast to pure symbolism, I will present arguments that some Genesis sections were written in this way. … The key distinctive in this approach is that it invites us to respond to the contained worldview as a real product of a historical narrative rather than merely metaphorical expressions about God and Human existence. (p. 236)

In the next three chapters Fugle considers: Creation over six days; Adam, Eve, and Original Sin; and The Biblical Flood. I am going to take these out of order, leaving Adam and Eve for a separate post on Thursday.

Creation over six days is entirely contrary to the conclusions of modern science through a wide variety of lines of evidence – sedimentary columns, distant galaxies, fossils, radiometric dating, and more.  The biblical text also provides a number of hints that it isn’t to be interpreted in this way. The artistry of the text and the framework of the days of creation, for example. This doesn’t mean that it is entirely figurative or symbolic. There is a history behind the text.  “The statement that God created the heavens and earth is a historical claim about something that is literally true, and the succession of events in Genesis 1 implies a progression through time rather than an instantaneous creation.” (p. 242)  Fugle also sees the verbs for creation “let the land produce” as indicating a historical process consistent with evolution.   He sees no reason to rule out this kind of consistency in the text. The claim that we should only consider the ancient context “unnecessarily limits what may be contained within these God-inspired verses.” (p. 245)

Fugle also discusses John Walton’s approach to Genesis 1 as inauguration of a cosmic temple, ordering and assigning function.  This is a historical claim of a different sort, but there is still a historical foundation for the text.  It is a viable possibility.Although Scripture does speak of God as the ultimate creator of everything, this isn’t the point of Genesis 1-2. Here we have the inauguration of the earth and the garden as sacred space, God’s temple.

The Biblical Flood.  There is no physical evidence for a flood of global proportions and a wide range of difficulties with such an interpretation.  The number of animals relative to the size of the ark, the ability of distant kinds to get to the ark from distant locations, from the arctic to Australia to South America.  The extinction of either saltwater or freshwater sea creatures in a global flood (depending on the salt content of the water). The super speed evolution required over a few thousand years to produce all current species from a virtual handful of kinds. The difficulty of dispersing all these species over the globe. “However, to put it frankly, incredible calisthenics are required to hold together a worldwide flood construct and there is virtually no scientific support for it.” (p. 265)

A worldwide flood is often used as a cure-all for the questions raised by the layering of fossils in the geological columns. However, this discussion generally misses the main point of the fossil evidence, the sequencing of plant and animal fossils. This can’t be accounted for by locomotion or by size. Fugle illustrates this nicely with the organization of plant fossils.

Flood geology explanations entirely break down when we consider the locations of fossilized plants. Plants obviously lack the ability to move through floodwaters. What the fossil record shows is conspicuous sequencing: (1) the lowest sediments contain only primitive plants such as ferns and horsetails, (2) intermediate sediments are dominated by cone-bearing gymnosperms but also contain some ferns and horesetails, and finally, (3) recent sediments are filled with a huge variety of flowering plants, as well as representatives of the earlier plant groups. These plant fossil patterns correspond to our comprehensive understanding of how plant types evolved over time. (p. 266) 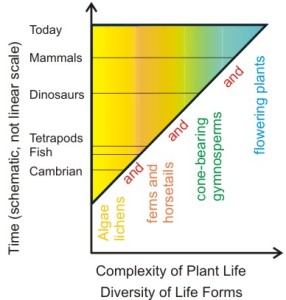 An image to hold in mind when considering the grand form of the fossil record and evolutionary theory is that of water filling a reservoir. As time goes on there is a wider diversity of types, but not complete disappearance of all earlier types. This could be explained by an old earth progressive creation picture, but is not explicable by a recent global flood.

Then we turn to the Bible.

Perhaps the most revealing evidence against flood geology [and a global flood] is that none of its incredible claims are mentioned in the Bible. Does it not seem odd that there are no references in the narratives of Noah’s flood or later Genesis chapters fro (1) monumental atmospheric and geological events around the globe, (2) massive migrations of unrecognizable animal species from distant lands to Noah’s location … or (3) remarkable evolutionary transformations in animal forms during the limited years of human history after Noah? It is far more reasonable to understand that, if Noah’s ark was real, he gathered significant local animals onto his vessel and survived a large-scale flooding event in the region of the earth with which he and his family were familiar. (p. 268)

Young earth global flood formulations that include consideration of the size of the ark and the number of animals that it could contain generally propose that the current diversity arose from fast diversification (evolution) of kinds present on the ark.  For example, lions, tigers, cheetahs, pumas, house cats etc. derive from a recent cat-like ancestor from the ark. This rate of change far exceeds anything an evolutionary biologist would propose and we would expect some appreciation for this rapid rate of change in the written historical record, both in Scripture and in other ancient texts. But no such tradition exists. Common sense understanding leads to a view that species are static.

Fugle also runs through a number of textual reasons to consider the text as referring to a local rather than global flood. On these grounds “[m]ost Christian scholars conclude that the narrative of Noah’s flood is either an entirely figurative story with important symbolism or a creative account about a significant event in a localized geological area.” (p. 262)

Fugle appears to favor the local flood view.  He does not argue that an entirely figurative story with important symbolism is contrary to Christian orthodoxy, or even to evangelicalism. We need to deal with the issues to determine the most likely interpretation.

How can we faithfully read the text with evolution in mind?

Should science ever shape our reading of the text?

Are heliocentrism and evolution significantly different in this regard?

If you would like to comment please see Reading the Bible With Evolution in Mind at Jesus Creed.

This entry was posted in Bible, Creation, Genesis and tagged Gary N. Fugle. Bookmark the permalink.
%d bloggers like this: