The Serpent in the Garden 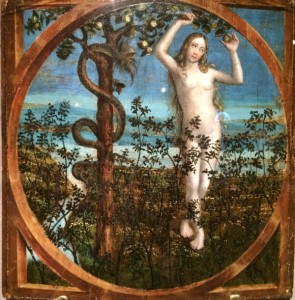 All was going along great. Adam, Eve, Garden, God. And then, appearing from nowhere, the serpent was in the garden. The first verse of Genesis 3 introduces the character.

Now the serpent was more crafty than any of the wild animals the Lord God had made. He said to the woman, “Did God really say, ‘You must not eat from any tree in the garden’?”

The serpent was in the garden. Adam and Eve are not responsible for the serpent’s appearance. They did not introduce imperfection into a previously perfect creation. They are, however, responsible for their response to the serpent. Adam was placed in the garden “to work it and take care of it” or better “to work it and guard it.” Longman points out that the word translated “take care of” is often translated “guard” and this gives a better nuance to Adam’s task. Eve, as Adam’s suitable counterpartner, shared in this task. Among other things, they were to guard the sacred space against evil. Instead they listened to the serpent and ate of the fruit of the forbidden tree.

There is an important point here. Genesis 1-2 do not depict the creation of a perfect world free from all pain and suffering. Adam was going to have to work, Eve would experience pain in childbirth. The consequences of their disobedience intensify the work and multiply the pain.

Indeed, we know from the story of Genesis 3 that not only was there suffering and pain that was “intrinsic” to creation, but there was already the presence of moral evil that was “extrinsic” to it. After all, we have the presence of the serpent before human rebellion. Adam had been commissioned to “guard” the garden against such attacks, thus there was hostility before the fall.

With this in mind we go back now to the account of creation, particularly in Genesis 1, and note that the picture is not so much God creating a world without suffering and pain and chaos, but rather it is the story of his restraint rather than removal of non-moral suffering, pain, and chaos. (p. 79)

This does not mean that God didn’t create everything, but the biblical account purposefully does not narrate the origins of darkness or the waters [n]or does it give us an account of the creation o[f] the serpent nor an explanation of its evil nature. (p. 79)

In fact, the Bible tells us nothing about the origin of evil and chaos. Chaos or disorder as exemplified by darkness and sea were present from the recorded beginning.

And this is what makes the new creation as described in Revelation 21-22 different from the old creation. … “for the first heaven and the first earth had passed away, and there was no longer any sea” (Rev. 21:1) … Indeed, there “will be no night there” (Rev 21:25; also 22:5). No sea and no darkness, unlike the first creation. God has not just constrained chaos, but has eradicated it. (p. 79-80)

And the serpent, vanquished completely before the new creation, was already in the old creation, able to enter the garden, when Adam and Eve were placed there to work and guard it.

While evil itself was present, before the fall Adam and Eve were morally innocent. By eating the fruit of the tree “Adam and Eve actually partake in evil.” (p. 65) They now know evil by their actions. 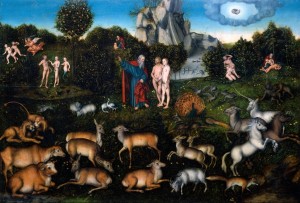 Human sin, human rebellion, ruptured relationships. First and foremost the rebellion of the man and woman ruptured their relationship with God. Genesis 3 depicts God walking in the garden in the cool of the day.

Then the man and his wife heard the sound of the Lord God as he was walking in the garden in the cool of the day, and they hid from the Lord God among the trees of the garden. But the Lord God called to the man, “Where are you?” He answered, “I heard you in the garden, and I was afraid because I was naked; so I hid.” (v. 8-10)

Longman points out that this description should not be taken literally. It depicts God in human terms, walking in the garden, unable to see the man and woman. The story is structured to convey theological truths. “These theological truths are not that God is limited in understanding or has legs; this figurative language is used to teach us that humans have placed a huge barrier between themselves and God by their rebellion against him.” (p. 65)

Once the man and woman are expelled from the garden the interaction of humans with God takes a very different form.

Human rebellion also ruptures relationships with each other.

To the woman he said, “I will greatly increase your pangs in childbearing; in pain you shall bring forth children, yet your desire shall be for your husband, and he shall rule over you.” (v. 16)

In any event, there is definitely a rupture of relationship in the second part of this consequence.

“Your desire will be for your husband and he will rule over you.” Although this translation is fine, it can be easily misunderstood if the woman’s desire is taken as romantic desire. … the more telling sense of the word comes in Genesis 4:7 where personified sin desires Cain. Clearly, sin does not desire Cain romantically; it desires to consume or control him. … When sin affects the marriage relationship, it is not a matter of a woman desiring romance, but rather a woman desiring to control her husband, and , as the next part of the verse indicates, his attempt to control (“rule over”) her. (p. 67)

Both men and women desire control and power. A mutual partnership devolves into a power struggle. The consequence for Adam is toil to wrest a living from the ground – work becomes an anxious, meaningless toiling under the sun. “We should not understand the punishment of the man and woman as unique to them. Men as well as women struggle in relationships, and women taste the futility of work as well as men.” (p. 68)

Genesis 3 is an important passage concerned with origins. But not the origin of suffering or evil. Rather it tells the story of the origin of the broken relationships with God and with each other.

And this is only the beginning.

You may also comment on The Serpent in the Garden at Jesus Creed.

This entry was posted in Adam, Genesis, The Fall and tagged Tremper Longman III. Bookmark the permalink.

2 Responses to The Serpent in the Garden