The Christian Origin of Science?

J.B. (Jim) Stump has a new book, Science and Christianity: An Introduction to the Issues. This book is designed as a college textbook to introduce the reader to various facets of the problem. It is not an apologetic for science or for Christianity. The book is short – 180 pages – and an easy read. It will provide an excellent introduction for Christian leaders at all levels, including (and perhaps most importantly) the local church. I gave a brief introduction in an earlier post (Signposts to God and More).

Science as we know it today originated in the Christian West. There is no debate about this. All cultures are capable of science – and the scientific revolution has traveled the globe, but it originated in Christian Europe. The role Christianity played in the development of science is less clear and debated. Was this an accident of history or are there features of Christianity that allowed scientific thinking to develop?

Other cultures seemed to have been further along the road of scientific development in the ancient world. But their attempts at birthing science were “stillborn” to use the phrase of Stanley Jaki…. The Scientific Revolution occurred in the Christianized Europe of the 16th and 17th centuries. (p. 20)

Some level of scientific thought developed in the thirteenth and fourteenth century. Thomas Aquinas and the two books metaphor (an idea with even earlier roots) helped to set the stage. Revelation and theology were primary, but reason and empirical study could be useful. Roger Bacon, contemporary with Aquinas, sought to reclaim secular learning “from the pagans so that it might serve the church.” In fact he wrote (quoted by Stump) “the philosophy of unbelievers is essentially harmful and of no value considered by itself. For philosophy in itself leads to the blindness of hell, and therefore it must be by itself darkness and mist.” (p. 19) Nonetheless the learning of pagans and the empirical investigation of the world could serve the mission of the church. Both Aquinas and Bacon were medieval thinkers – but they helped to pave the way for modern science.

The scientific revolution itself began in the sixteenth and seventeenth centuries. Studies of cosmology advanced by Copernicus, Galileo, and Kepler provide popular examples of this development, but it extended beyond astronomy and cosmology. Although these discoveries were occasioned by technological advances, such advances were not unique to the West. It is important to look at internal concepts providing a fertile ground for new ideas and external social constructs that enabled the development of scientific thinking. There are several reasons suggested for the development of science in the Christian West. (This is my distillation from Jim’s more extensive discussion.)

The key witness for Hooykaas on this point was Johannes Kepler in his unwillingness to bow to the rationalist conceptions of the fathers of natural philosophy that the heavenly bodies mus move in perfect circles. Instead he allowed an anomaly of eight minutes in the arc of the observed orbit of Mars to convince him to abandon the dogma of circularity. … It was the Reformation attitude of not blindly following authority that gave Kepler the permission to see the data for what it was, rather than for what it had been said to be. (p. 23)

Catholic thinkers, unsurprisingly, are less ready to credit the Protestant Reformation with a significant role. 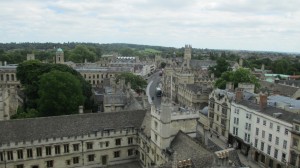 The above suggestions are “internal” relating to ideas. There is also the suggestion that “external” factors in the social context of the Christian West contributed to the development of science as an independent discipline.

Jim starts his conclusion “It is not reasonable to deny that Christianity played an influential role in the development of modern science.” (p. 26) Science developed in the Christianized West and remained localized in this environment for several centuries. It is also true that “It is not a matter of debate that science which developed in the Christian West has become more culturally powerful than it was at its inception.” (p. 26) In our world the scientific viewpoint has broken free of the church and has traveled the globe. Rather than handmaiden, it is often thought to be the master of theology. For many (but far from all) scientific modes of thinking have removed theology from the realm of rational study. Secularization is the subject of the next chapter and we will look at this in the next post on the book.

Is science the handmaiden of theology? If so in what ways?

Is it coincidence that science developed in Christianized Europe? Did Christianity help or hinder this development?

You may also comment on The Christian Origin of Science? at Jesus Creed.