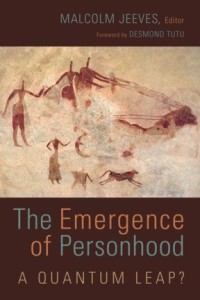 What distinguishes humans from other animals? The question is hard to answer definitively. We know intuitively that a dog, a dolphin, or even a chimpanzee is not human. Certainly no other animal builds schools, writes symphonies, performs surgery, or ponders the intricacies of the universe. Building, while not unheard of, develops none of the complexity of human cities including cities and villages dating back thousands of years. But how can we classify the difference?

I picked up a book recently, The Emergence of Personhood, A Quantum Leap? edited by Malcolm Jeeves, professor emeritus of psychology at the University of St. Andrews in Scotland. This book explores the question of personhood from many different perspectives ranging from evolutionary biology, psychology, and anthropology to philosophy and theology. Although many of the contributors are Christian, this isn’t true of all and wasn’t a requirement for participation. Jeeves invited contributions from humanists, theists and atheists to “bring a genuine multiplicity of voices to speak to common themes.” Christian theologians and psychologists (e.g. Anthony Thiselton and Justin Barrett) might bring in the concept of imago Dei or image of God. Such a perspective is foreign to humanist or atheist thinkers, but other important questions are highlighted in this case. On complicated questions we will move forward most clearly in a polyphonic discourse rather than a monologic discourse. N.T. Wright (also at St. Andrews) comments on the back cover that the book is an “exhilarating effort to tackle these questions from as many angles as possible.” Different perspectives will sharpen our views and arguments, and sometimes change minds. (Other animals, by the way, don’t do this.)

Many “human” traits are shared in the animal kingdom. Tool making, for example, is more wide spread than previously thought – although there is a boundary that is crossed even in early hominin stone tools. Chimpanzees recognize themselves in a mirror. Other animals can even conduct warfare in some sense. Richard Byrne, author of the first essay in the book, points out that some chimpanzee communities carry out a form of warfare. (The images here are of bonobos, from Wikipedia)

Groups of males set off silently and purposefully like a commando unit, to raid neighboring communities. If they can, these raiders kill males and coerce females to return with them. The killings are brutal and take many minutes, with a group of males joining in beating, biting, and pummeling the unfortunate victim, usually leaving it dying rather than quite dead. This violence is not an isolated or pathological phenomenon. Warfare is known in many chimpanzee communities, though it is usually sporadic, with periods of “guarded peace” between communities. (p. 19)

Anglican bishop Desmond Tutu provides the forward to the book, observing that human personhood is characterized not only by a tendency to violence, but also by the capability for intentional forgiveness.

Over the course of my lifetime, the human capacity for evil, and our capacity for love, has been illustrated in South Africa as boldly as anywhere in the world. Here is an example of the remarkable things I was privileged to be part of, when people of all races left one speechless with their magnanimity, their capacity to forgive, their generosity of spirit. (p. viii)

We can step outside of ourselves and learn to appreciate each other. How does this relate to the emergence of personhood and the nature of human distinctiveness? 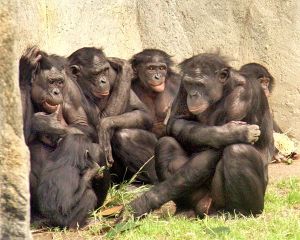 Language. In his essay to start part one of the book, Richard Byrne argues that the dividing line between humans and other animals centers on language and the ability for complex communication. In comparing human capabilities with apes, he doesn’t limit language to vocalizations but includes intentional gestures as well. Some apes, including chimpanzees and bonobos, have an elaborate range of gestures used to communicate directions. These can vary for individuals in visual contact or not. “Thus, apes do understand the physical basis of gestural communication. Most impressively of all, there is evidence that apes perceive the degree to which the audience has understood their gestures – that is, they monitor the mental states of other individuals.” (p. 29)

The gestures used by apes, however, may not be truly comparable to human language. Byrne argues that these are not evidence for true linguistic ability because there is no expansive learned vocabulary or structure. The range of gestures seems to be innate and shrinks and sharpens with age rather than grows and expands as human language does. He notes that “great ape gestural repertoires are not learned by imitating others nor even learned over successive interactions with them.” (p. 29) Many of the gestures are shared across communities and species. In many respects they are similar to instinctive displays in other animals. The “vocabulary” of older individuals in a population is smaller than that of the youngsters. Older individuals restrict themselves to the most effective gestures, while younger individuals experiment with many gestures, pruning the range used with age and experience. Byrne does leave the caveat that some of these conclusions may change if it becomes possible to study bonobos in the wild. In captivity bonobos appear to have the greatest possibility for “humanlike communication.”

Human civilization is based on communication enabling the transmission of complex information from generation to generation. The capacity for language is required for this transformation and appears to be linked to creativity. Although Byrne acknowledges that this ability “was undoubtedly built on cognitive foundations we share with other species” it remains a robust dividing line between humans and other animals alive today.

How would you define the dividing line between humans and other animals?

Is this an important question?

You may also comment on The Dividing Line at Jesus Creed.