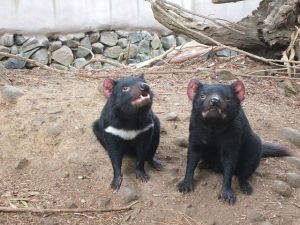 When my son was in third or fourth grade he gave a year end report on Tasmanian Devils (image credit). These are fascinating carnivorous marsupials now found only on on the Australian Island state of Tasmania. But it wasn’t all fun – there is a dark side to the tale of the Tasmanian Devil. They are severely threatened by a transmissible facial cancer. Bites transfer cancer cells from animal to animal. The genetic diversity of Tasmanian Devil is so small that the cells are not fought off as foreign invaders, instead they take root and the cancer spreads between individuals as it spreads within individuals. You can read more here. Genetic diversity in a population is a good thing. 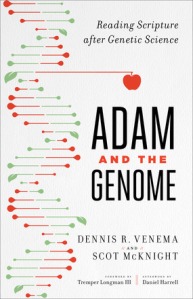 The observed genetic diversity across a wide variety of animal species is one of the strongest arguments against recent extensive population bottlenecks. Noah’s Ark is ruled out – unless we also postulate super-speed supernatural evolution in the immediate aftermath. This is not supported by Scripture or by any other evidence found anywhere.

Human Populations. Modern human populations exhibit far more genetic diversity than the Tasmanian Devil. Dennis runs through several lines of evidence for population bottlenecks in human evolution. This evidence suggests that human populations were never less than ca. 104. The first important point is that populations evolve, individuals don’t. The genetic composition of the population varies with time, and this variation can accumulate to result in significant changes. Whale evolution is an excellent example. If two populations of the same species are separated in some fashion, often, but not always, by a physical barrier, and evolve independently they can produce very different results and two (or more) new species. There is no one instant in time where the two populations are suddenly distinct … although eventually they are clearly different.

Mutation frequency. An allele is a variant form of a gene located at the same position, or genetic locus, on a chromosome. Color of hair, skin, eyes all result from slight differences in our genes. By comparing the DNA of thousands of individuals, now rather straightforward thanks to the Human Genome Project, it is possible to estimate historical population sizes. “Taking into account the human mutation rate, and the mathematical probability of new mutations spreading in a population or being lost, these methods estimate an ancestral population size for humans right around that 10,000 figure.” (p. 48)

Linkage disequilibrium. If you want to stay away from mutation rates (perhaps these were more frequent in the past), population size can be estimated by considering gene recombination. In the cell division that results in sperm and egg cell, “there is a process of mixing and matching of alleles to make new combinations.” (p. 49) The crossover process of mixing and matching results in genes close to each other remaining together more often than genes widely separated on the chromosome. Millions of pairs of loci (different gene locations) have been analyzed for all of our chromosomes. “And what is the final tally after crunching all that data and counting up ancestors? The results indicate that we come from an ancestral population of about 10,000 individuals – the same result we obtained when using allele diversity alone.” (p. 51)

A more details analysis of the genetic data including mutation and recombination provides an estimate of something like 0.7×104. Dennis notes, however, that this number may shift upward as the number of sequenced individuals increases.

Incomplete lineage sorting provides another line of evidence for population sizes. Because populations evolve, there is always some diversity in the original population as it separates. It is possible for variants present in the original population to be lost or retained in the separate populations. The total genome suggests (strongly) that humans are most closely related to chimpanzees, with gorillas and then orangutans more distant. Because of incomplete lineage splitting, however, there are some genes that human share with gorillas but not with chimpanzees (read Dennis’s chapter, or his blog posts, for details). This isn’t a problem for the theory – rather it is a line of evidence for the timing of population separation and the size of those populations. The common ancestral population of humans, chimpanzees, and gorillas were on the order of 5×104.

It seems our smallest effective population size over the last 18 million years was when we were already human, at around the time some of our ancestors left Africa.

Put most simply, DNA evidence indicates that humans descend from a large population because we, as a species, are so genetically diverse in the present day that a large ancestral population is needed to transmit that diversity to us. To date, every genetic analysis estimating ancestral population sizes has agreed that we descend from a population of thousands, not a single ancestral couple. Even though many of these methods are independent of each other, all methods employed to date agree that the human lineage has not dropped below several thousand individuals for the last 3 million years or more – long before our lineage was even remotely close to what we would call “human.” (p. 55)

Perhaps there is a purpose to the method of evolutionary creation. Descent from two individuals is not “good.” Genetic diversity is an asset – as the Tasmanian Devil illustrates. There is more in this chapter of Adam and the Genome, but this is enough for today.

What does the genetic evidence suggest to you?

Have you ever considered to consequence of low genetic diversity?

How does the genetic evidence challenge or shape our understanding of God’s creation?

You may also comment on Consider the Devil(s) at Jesus Creed.