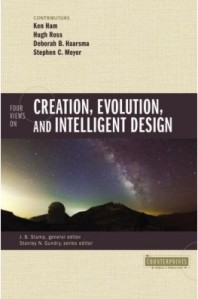 In the opening chapter of Four Views on Creation, Evolution, and Intelligent Design Ken Ham describes and defends Young Earth Creation, the primary argument is that this is the most faithful interpretation of Scripture. None of the other three contributors Hugh Ross (Old Earth Creation), Deborah Haarsma (Evolutionary Creation), or Stephen Meyer (Intelligent Design) find this argument compelling. All three take Scripture very seriously as the inspired revelation of God’s mission in his creation, as the word of God.

Hugh Ross finds the most agreement with Ken Ham. Like Ham, he finds concordance between Scripture and modern science, but disagrees that a young earth is the best interpretation. He brings up a number of counterpoints – but perhaps the two most significant are first, we should have some humility in our interpretations.

Ham’s core message is this: “The issue of the age of the earth for Christians comes down to one of authority [of God’s Word] (p. 34). He implies that disagreement with his view denies biblical authority. In making such a statement, he (inadvertently) equates his particular interpretation of Genesis with “God’s Word.” While the text is inerrant, no mere reader of the text can be. Let me add that I, too, fully embrace the authority of God’s Word. (p. 51-52)

And second, the importance of free will in God’s good creation.

God certainly could have created a world with no death, disease, or pain. However, that would be a world where humans either lack free will (with no possibility for love) or continually face the awful risk of rebellion. God’s goal was to give humans a realm in which love is real, and by his loving intervention sin and evil could be permanently conquered and eliminated while keeping free will intact. The new creation (Rev 21) – where free will is safe because its already been tested by the strongest possible temptation – is his ultimate plan. (p. 53)

Deborah Haarsma agrees with Hugh Ross that “Ham’s argument sets up a false choice. It equates young-earth interpretation of Scripture with Scripture itself, forgetting that our human interpretations may be in error and do not carry God’s authority.” (p. 57) The interpretation favored by Mr. Ham doesn’t do justice to the context of the Scriptures – it ignores the original ancient Near Eastern context and thus distracts from the original intent of Scripture. She also emphasizes the effect that the misleading science put out by some young earth creationists has on our Christian witness. In his essay Ken Ham conveys the view that the disagreement between science and a young earth creation are the result of an anti-biblical worldview. Unfortunately, most young earth arguments have serious logical and scientific errors. Excellent resources digging into the science include The Bible, Rocks, and Time by Davis A. Young and Ralph F. Stearley and The Grand Canyon, Monument to an Ancient Earth: Can Noah’s Flood Explain the Grand Canyon? edited by Carol Hill,‎ Gregg Davidson,‎ Tim Helble and Wayne Ranney.

Stephen Meyer notes that some of his colleagues in intelligent design affirm a young earth. Speaking for himself, not as a representative of the whole movement, he notes that he is “not persuaded by either his [Mr. Ham’s] biblical or scientific arguments.” (p. 61) Among other reasons he notes that the creation (or appearance) of the sun and moon on the fourth day was functional – to mark days, seasons, and years. If this function was not present on days 1 to 3 how was time marked? In order to insist on on twenty four hour solar days reads into the text a precision that the text itself does not support.

Since I doubt that the Genesis text, even read literally, teaches a young earth, I have never felt compelled to interpret the scientific evidence concerning the age of the earth in light of that assumption. Though I hold a high view of the inspiration and authority of Scripture, I think that Scripture itself is telling us that at least the duration of the first three days could not have been measured as we measure time today. (p. 64)

In the absence of a clear teaching of Scripture, we should turn to the scientific evidence. “There I find the case for the great age of the earth and universe quite compelling for the same reasons that Deborah B. Haarsma and Hugh Ross explained in their essays.” (p. 64)

Perhaps Stephen Meyer’s most significant disagreement with Ken Ham is in the emphasis that Mr. Ham and Answers in Genesis put on the age of the earth.

It is important to recognize that people who hold high views of biblical authority (and similar hermeneutical principles) can honestly disagree about what Genesis teaches about the age of the earth. For this reason, making that issue a touchstone of orthodoxy has been an unnecessarily divisive issue within the church. It has also distracted attention from more important issues and evidence, including the compelling evidence for the existence of an intelligent and transcendent Creator. (p. 65)

Thoughts of my own. I find Ken Ham’s argument unpersuasive more or less across the board. Although he does have a high view of the authority of Scripture, he does not seem to start with Scripture. Rather he starts with a specific theological framework – these are the glasses that color his view. Both Scripture and observations of the natural world are viewed through these glasses and forced into a mold defined by the parameters of the theological framework. This wouldn’t be a problem if the evidence from Scripture and the world around us fit into the mold. But it doesn’t. The reasoning resembles one large and fragile house of cards. It may seem sturdy – but only until you start to examine the individual pieces more closely.

Scripture isn’t about the age of the earth, or even the entrance of evil into creation. The snake is in the Garden from the very beginning. In Genesis 3 Adam and Eve are tempted into rebellion.

There are many problems in our world and country today – and as Christians there are genuine concerns. The solution isn’t to cling to a young earth view of creation, but to read and embrace the whole sweep of Scripture.

He has shown you, O mortal, what is good. And what does the Lord require of you? To act justly and to love mercy and to walk humbly with your God. (Micah 6:8)

You may also comment on Why Not YEC?  at Jesus Creed.

This entry was posted in Creation. Bookmark the permalink.

2 Responses to Why Not YEC?