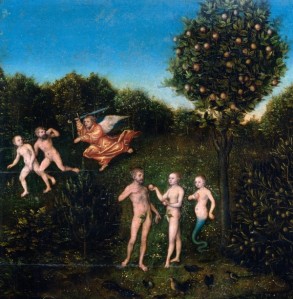 We’ve been working through The Lost World of the Flood: Mythology, Theology and the Deluge Debate by Tremper Longman III and John Walton. They summarize:

Our view has been laid out: a real flood of universal impact was the impetus for the story found in Genesis 6-9, which depicts this flood, using hyperbole, as a worldwide event for theological reasons. Since the interpretation of the event given in Genesis is what carries authority, we must understand how the biblical narrator has shaped Genesis 1-11. (p. 101)

There is a pattern to the narrative. Human disobedience, divine judgment, and mercy (grace). Genesis 1 describes God’s creative action in worshipful elevated prose. Genesis 2 establishes the partnership between man and woman before God. Then we get to Genesis 3.

Fall #1. Placed in the Garden to care for it in relationship with God, the woman and the man disobey God’s command. Judgment and mercy follow. There are consequences for disobedience. The man and woman are expelled from the Garden of God. Life becomes hard, enmity between them takes root, the tree of life is off limits. Yet God clothes them and continues to care for them. The retain the vocation as the image of God to subdue and fill the earth. 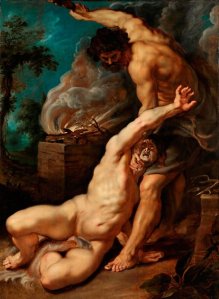 Fall #2. The story of Cain and Abel. God tells Cain “sin is crouching at your door; it desires to have you, but you must rule over it.” (4 v. 7) Cain, however, gives in to temptation and kills his brother. Divine judgment, punishment and mercy follow. Cain is expelled, but in his fear that he will himself be murdered by others as he wanders the land the Lord assures him and gives him a mark as protection. “But the Lord said to him, “Not so; anyone who kills Cain will suffer vengeance seven times over.” Then the Lord put a mark on Cain so that no one who found him would kill him.” (4 v. 15) The narrative goes on to describe the accomplishments of Cain’s descendants and their impact on future generations. It also describes another “fall” in the arrogance of Lamech. Another element of mercy comes in the birth of Seth to Adam and Eve, replacing their slain son. 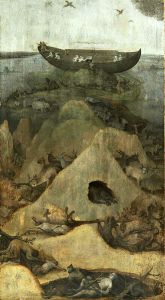 Fall #3. The story of the flood. All of humanity, perhaps all of creation, is now fallen. No specific transgression is recounted – except perhaps by the sons of God – yet the depravity of humankind is made clear. “The Lord saw how great the wickedness of the human race had become on the earth, and that every inclination of the thoughts of the human heart was only evil all the time.” (6 v. 5) Judgment comes in the form of a massive deluge to wipe out the transgressors. Yet there is mercy in judgment again when God sees Noah and saves him, his wife, his sons and their wives, in the ark. Here mercy extends to the animal kingdom as well, with the preservation of breeding pairs.

After the flood God makes a covenant with Noah, promising that he will never again destroy all mankind. “[T]he covenant is a product of God’s grace. Humanity well deserves to suffer extinction after its repeated and deep rebellion against the one who created it. Yet God determines not to bring his creation and creatures to an end but to begin anew. The covenant sets the theme for the entire flood narrative.” (p. 106) 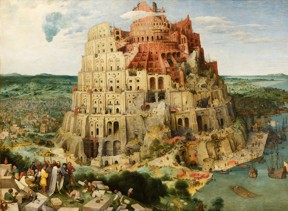 Fall #4. Human rebellion comes once again and rather quickly. The hierarchy set up between Ham, Shem, and Japheth, and later the tower of Babel. “Then they said, “Come, let us build ourselves a city, with a tower that reaches to the heavens, so that we may make a name for ourselves; otherwise we will be scattered over the face of the whole earth.” (11 v. 4) The Lord put a stop to this by confusing their tongues and scattering them over the earth. Tremper and John note that this story does not carry an obvious element of grace. Perhaps however, the element of grace mercy comes in the continuing story when God calls Abram and makes a promise to him “Now the Lord said to Abram, … “in you all the families of the earth will be blessed.”” Humanity has been dispersed, but God’s care for his creation continues.

With the calling of Abram the tone of Genesis changes. The story becomes personal in the shaping of the chosen people of Israel. Humans will continue to fall and God will continue to respond with judgment and mercy and tokens of grace. God makes a covenant with Abraham and later with Moses then David, leading ultimately to the new covenant in Jesus (descended significantly from Abraham and David).

John and Tremper agree that the events behind the four major stories in Genesis 1-11 occurred, but this isn’t the emphasis or significance in the narrative. “In summary, the book of Genesis as a whole shows an interest in the past, but is often true concerning narratives about the past, its interest is more in the narrator’s present. That is why we have adopted the genre label “theological history” to describe the genre of the book of Genesis as a whole, since it is interested in talking about God as he interacts with his people in space and time.” (pp. 110-111)

I find the “reality” of the events in Genesis 1-11 of less significance than Tremper and John, but find their reading very helpful. Clearly there is an intentional element of history – God created the world, he created humanity in his image, humans are rebellious and fallen. This sets the stage for the mission of God in the world described in the biblical narrative from Genesis 12 to Revelation.

How does this set the stage for what is to come?

You may also comment on The Unfolding Pattern at Jesus Creed.