Authority is in the Intent 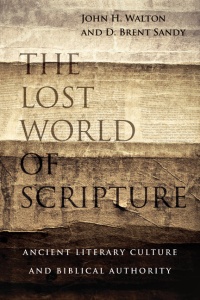 Communication is a deliberate action with a specific purpose or intent. Human communication generally uses words and sentences and it uses these to convey an idea and to elicit a response. John Walton and Brent Sandy, The Lost World of Scripture, make the point that intent is part and parcel of the authority of a communication. It is the integral and essential carrier of authority.

What does this mean for the narrative literature in the Old Testament? The stories are generally event oriented and the authors intend to convey both the events and the meaning of the events in God’s relationship with his people. This is theological history not “straight” history. The ancient Israelite authors had nothing like our modern discipline of history. “The authors and compilers do not edit events with the same goals or methods that we use.” (p. 211) Abraham, Moses and David are not merely literary figures in a historical novel of some sort … but neither are the reports of the events surrounding their lives modern historical transcripts. These are stories in community memory, told and retold and recorded, for a purpose. They are told and recorded according to perfectly appropriate conventions of the ancient world.

Of course we do have to consider which portions of Scripture are, in fact, event oriented. Certainly Genesis 12-50, Exodus, Deuteronomy, Joshua, Judges, Samuel, Kings, Chronicles, Ezra, Nehemiah, portions of Jeremiah and Isaiah fall into this category. (This is not intended to be an exhaustive list – just the books that came to mind readily). Other books sometimes considered “historical” were probably never intended to be event oriented. Job is not – its genre is something different. Walton makes this point in his commentary on Job. Nor is Song of Songs event oriented, or, I would claim, Jonah (although Walton may disagree with me here).

In much of the narrative event-oriented literature in the Old Testament, the focus is on the outcomes of the events rather than the details of the events themselves.

Some consequences of this (selected and paraphrased from pp. 213-214):

The authority of Scripture is in the intended message. (Walton and Sandy use the term illocution.) The authoritative message comes through the ideas, values, and conventions of the communicator.

Ancient communicators did not falsify events or people, but neither did they share or abide by our conventions of reportage or testimony.

It was common and acceptable for some events (like the political and military achievements of Ahab) to focus on covenant failures or in other cases on covenant faithfulness. The intent is to accent the truths that are the most significant.

Exact numbers, populations, casualties, flocks and herds, precise geography, are not of great importance because the stories convey truth using ancient conventions where these elements could be used for rhetorical impact or shaped to enhance the understanding of the original audience. “The convention of reportage and the rhetoric associated with the genre may not correspond to our own” but the major characters in the event-oriented narrative literature were real.

What does it mean to say that a Biblical story is “true.”

How do these stories convey the intended message?

You may also comment on Authority is in Intent at Jesus Creed.

This entry was posted in Bible and tagged D. Brent Sandy, John Walton. Bookmark the permalink.

1 Response to Authority is in the Intent