Creeds Before the Canon? 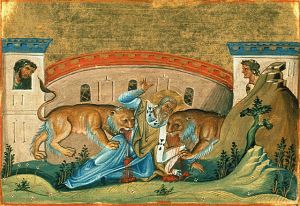 The creeds came before the canon but developed from and alongside the apostolic writings that became our New Testament.

I read a thread of comments last week (not on my post) where it was claimed that there are something like 30000 Christian denominations. I don’t know if this number is correct or not. And I don’t care. The commenter was arguing against the clarity of Scripture and noted that 29,999 of these must be wrong. But the commenter was off by 1. All 30,000 are wrong … someplace in some way. In fact, the one thing we can be sure of is that every last one of us are wrong in some fashion when we interpret and apply Scripture. Most of the errors are small, of no real importance – but the point remains, reading and interpreting Scripture is a human activity and thus prone to misunderstanding. No form of human communication is perfect. We need humility (and prayer).

We read and interpret Scripture in a community – small groups, local churches, larger organizations, and denominations, and we read it in the stream of the communion of saints over the last 2000 years (or more for the Old Testament books). No Christian stands alone, no local church or pastor/theologian stands alone.

The early church confronted the problems of interpretation and drift from the very beginning. Even before some of the books in our Bible were written and well before they were collected and the canon defined and closed. Problems in interpretation are apparent in Acts and the letters of Paul, who sometimes deals with issues of interpretation in the churches. This was a serious issue in the early church, especially as it moved out of the Apostolic era. What is the essence of Christian belief and what moves outside the bounds? Remember, they had letters and other writings taken as edifying, of value to the church, even authoritative – but not a defined canon. Michael Bird (What Christians ought to Believe: An Introduction to Christian Doctrine Through the Apostles’ Creed) reminds us of criteria used in the church as the canon was developed (see, for instance, Eusebius The Church History written before 325 AD)

1. Apostolicity: Was it written by an apostle?

2. Orthodoxy: Did it conform to the rule of faith?

3. Antiquity: Could it be dated to the apostolic age?

4. Catholicity: Was it generally accepted in the worship and instruction of the majority of churches.

The rule of faith is found in the writings of the early church fathers. (Quotes below are from The Ante-Nicene Fathers vol. 1, 3, 4). It doesn’t focus on all aspects of Christian life, or on how we are to live in light of what we believe. But it does outline our basic beliefs about God, Jesus, the Holy Spirit, the Church and our future hope. Between 100 and 200 AD we have examples from Ignatius, Irenaeus and Tertullian.

Ignatius. ca. 107 AD, The Epistle of Ignatius to the Trallians (shorter version) has:

Stop your ears, therefore, when any one speaks to you at variance with Jesus Christ, who was descended from David, and was also of Mary; who was truly born, and did eat and drink. He was truly persecuted under Pontius Pilate; He was truly crucified, and [truly] died, in the sight of beings in heaven, and on earth, and under the earth. He was also truly raised from the dead, His Father quickening Him, even as after the same manner His Father will so raise up us who believe in Him by Christ Jesus, apart from whom we do not possess the true life.

Ignatius focuses on Christ in this letter but puts forth clearly the elements of belief in Christ. The image at the top of this post is an illustration of the martyrdom of Ignatius produced in ca. 1000 AD. His letters were written to churches as he traveled to his martyrdom.

Irenaeus. A generation or two later we have Irenaeus as he writes against errant beliefs confronting the church. Two passages are particularly interesting. I have added emphasis to the statements we find later in the creeds.

The Church, though dispersed through our the whole world, even to the ends of the earth, has received from the apostles and their disciples this faith: [The church believes] in one God, the Father Almighty, Maker of heaven, and earth, and the sea, and all things that are in them; and in one Christ Jesus, the Son of God, who became incarnate for our salvation; and in the Holy Spirit, who proclaimed through the prophets the dispensations of God, and the advents, and the birth from a virgin, and the passion, and the resurrection from the dead, and the ascension into heaven in the flesh of the beloved Christ Jesus, our Lord, and His [future] manifestation from heaven in the glory of the Father “to gather all things in one,” and to raise up anew all flesh of the whole human race, in order that to Christ Jesus, our Lord, and God, and Saviour, and King, according to the will of the invisible Father, “every knee should bow, of things in heaven, and things in earth, and things under the earth, and that every tongue should confess” to Him, and that He should execute just judgment towards all; …

As I have already observed, the Church, having received this preaching and this faith, although scattered throughout the whole world, yet, as if occupying but one house, carefully preserves it. She also believes these points [of doctrine] just as if she had but one soul, and one and the same heart, and she proclaims them, and teaches them, and hands them down, with perfect harmony, as if she possessed only one mouth. For, although the languages of the world are dissimilar, yet the import of the tradition is one and the same.

According to Irenaeus the church has one set of beliefs across the known world. And they do not depend on on the apostolic writings but from the continuous tradition of the church. Even churches without access to the writings follow the Tradition – the rule of faith. He elaborates on this in another passage.

Against Heresies 3:4:1-2 (Irenaeus had writings of the apostles – but not the defined canon)

For how should it be if the apostles themselves had not left us writings? Would it not be necessary, to follow the course of the tradition which they handed down to those to whom they did commit the Churches?

To which course many nations of those barbarians who believe in Christ do assent, having salvation written in their hearts by the Spirit, without paper or ink, and, carefully preserving the ancient tradition, believing in one God, the Creator of heaven and earth, and all things therein, by means of Christ Jesus, the Son of God; who, because of His surpassing love towards His creation, condescended to be born of the virgin, He Himself uniting man through Himself to God, and having suffered under Pontius Pilate, and rising again, and having been received up in splendour, shall come in glory, the Saviour of those who are saved, and the Judge of those who are judged, and sending into eternal fire those who transform the truth, and despise His Father and His advent.

Those who, in the absence of written documents, have believed this faith, are barbarians, so far as regards our language; but as regards doctrine, manner, and tenor of life, they are, because of faith, very wise indeed; and they do please God, ordering their conversation in all righteousness, chastity, and wisdom. If any one were to preach to these men the inventions of the heretics, speaking to them in their own language, they would at once stop their ears, and flee as far off as possible, not enduring even to listen to the blasphemous address.

The rule of faith is important. The holy universal church is comprised of Christians who affirm this rule of faith.

Tertullian. Coming only a little later, Tertullian refers often to the rule of faith. Two examples below:

ca. 200 AD Tertullian, On the Veiling of Virgins 1

The rule of faith, indeed, is altogether one, alone immoveable and irreformable; the rule, to wit, of believing in one only God omnipotent, the Creator of the universe, and His Son Jesus Christ, born of the Virgin Mary, crucified under Pontius Pilate, raised again the third day from the dead, received in the heavens, sitting now at the right (hand) of the Father, destined to come to judge quick and dead through the resurrection of the flesh as well (as of the spirit).

We, however, … believe that there is one only God, … that this one only God has also a Son, His Word, who proceeded from Himself, by whom all things were made, and without whom nothing was made. Him we believe to have been sent by the Father into the Virgin, and to have been born of her—being both Man and God, the Son of Man and the Son of God, and to have been called by the name of Jesus Christ; we believe Him to have suffered, died, and been buried, according to the Scriptures, and, after He had been raised again by the Father and taken back to heaven, to be sitting at the right hand of the Father, and that He will come to judge the quick and the dead; who sent also from heaven from the Father, according to His own promise, the Holy Ghost, the Paraclete, the sanctifier of the faith of those who believe in the Father, and in the Son, and in the Holy Ghost. That this rule of faith has come down to us from the beginning of the gospel.

Many other examples can be cited from the early church fathers – but that would make this post far too long. The Apostles Creed refines this rule of faith, putting it in a concise and memorable form. But the roots go way back – to the apostolic teaching and through the very early church.

The rule of faith is not more important than Scripture, and it alone is not enough. There is much more we learn from the Gospels and the Epistles. But the rule of faith does define the essence of Christian belief about God – and has for over 1900 years. We read our Bible through the lens of this rule.

You may also comment on Creeds Before the Canon? at Jesus Creed.

This entry was posted in Christianity, Church. Bookmark the permalink.

1 Response to Creeds Before the Canon?