One Church for the World

I believe in …
the holy catholic Church,
the communion of saints,

Earlier this year my husband and I took a trip to Germany and visited a number of churches as well as Veste Coburg and Schloss Wartburg where Luther spent time when the Protestant confession was being debated. He worked on his translation of the Bible into German during this time. Travels around the world and immersion in the history of the Christian church drive home the importance of these two lines in the creed. The church is a unified whole however splintered it may seem. Shortly after our trip I posted on these two lines in the Creed while reading J.I. Packer’s Affirming the Apostles’ Creed, and Ben Myers’ The Apostles’ Creed. (See Holy Catholic Church, Communion of Saints.) Today I will focus on thoughts from Michael Bird’s What Christians ought to Believe and Derek Vreeland’s primal credo.

Michael Bird defines church as “the visible gathering of the faithful for the representation of Christ’s presence to the world.” (p. 194) He goes on: “To sum up the biblical images for the church, we could say that the church is one people under God, part of the story of God’s plan to repossess the world for himself, living in union with Christ and nourished by the Spirit and projecting God’s salvation into the world.” (p. 196) We can go further and dig deeper.

The church is one.

There has always been diversity in the church. Sometimes this diversity is good, bring a variety and depth to our faith. There is a place for Baptist, Catholic, Orthodox, Methodist, Pentecostal expressions of faith. At other times it is divisive, damaging the witness of the body of Christ in the world, particularly when we hold our differences as more important than our unity of belief – a belief expressed concisely in the Apostles’ creed.

Derek Vreeland reflects on this unity of belief.

It seems like the church is anything but one unified entity. Enter the creed. Our shared beliefs in the essentials of the faith as contained in the creed gives common ground for us to stand together and reclaim our oneness as a church. We may have differences on certain practices in the church or second-tier doctrines, but the creed gives us the binding essentials, the top-tier doctrines of the faith. If we believe these things, then we discover our commonality; we are in the same family. … If we allow … non-essential doctrines to become paramount, we erect barriers to others in the body of Christ. If we cling tightly to the creed, it has the power to form us into one church, without sacrificing our diversity. (pp. 110-111)

The church is holy. No one would claim that the church is perfect, but it is called to holiness. Paul writes “To the church of God in Corinth, to those sanctified in Christ Jesus and called to be his holy people” (1 Cor. 1:2)

The church is catholic – that is universal. Paul continues his salutation “together with all those everywhere who call on the name of our Lord Jesus Christ—their Lord and ours.” Michael Bird notes:

There is one church that exists in all places, and yet it adheres to one faith. In the end, the catholicity of the church is simply the universal expression of its oneness. All believers, wherever they are, are one in Christ and therefore one with each other. The concept of “independent” churches then is an oxymoron. (p. 200)

Not only is the the concept of “independent” churches an oxymoron, the slogan popular in the site church movement “one church in two locations” or three or four locations is just plain silly. We are one church in thousands of places – meeting as a local community in fellowship and worship. We need the church both local and catholic. 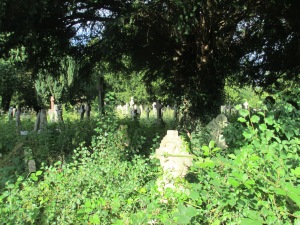 When we confess, “I believe in Jesus Christ, his only Son, our Lord,” we walk into a world where hostility has died. This new world has been made possible because God acted in human history and our Lord has become King with all authority in heaven and on the earth. Communion, community, and deeply felt brotherly affection are now possible even among those who were once enemies. Through a common confession we enter into a common communion with all the saints. (p. 123)

We are one church for the world but not of the world. We are called to a mission to … “live and love, serve and sing, preach and teach that Jesus Christ is Lord.” (Bird p. 204)

You may also comment on One Church for the World at Jesus Creed.