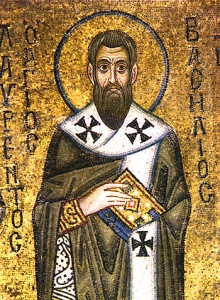 Craig Allert in Early Christian Readings of Genesis One, makes reference in passing to a comment by Basil of Caesarea (ca. 329-379 AD) regarding the purpose of creation. This is worth some consideration. We find Basil’s comment in NPNF2-08. Basil: Letters and Selected Works, The Hexæmeron 1.5. The quote below is on pp. 54-55 available online at the link.

It appears, indeed, that even before this world an order of things existed of which our mind can form an idea, but of which we can say nothing, because it is too lofty a subject for men who are but beginners and are still babes in knowledge. The birth of the world was preceded by a condition of things suitable for the exercise of supernatural powers, outstripping the limits of time, eternal and infinite. … They fill the essence of this invisible world, as Paul teaches us. “For by him were all things created that are in heaven, and that are in earth, visible and invisible whether they be thrones or dominions or principalities or powers” or virtues or hosts of angels or the dignities of archangels.

To this world at last it was necessary to add a new world, both a school and training place where the souls of [humans] should be taught and a home for beings destined to be born and to die. Thus was created, of a nature analogous to that of this world and the animals and plants which live thereon, the succession of time, for ever pressing on and passing away and never stopping in its course. Is not this the nature of time, where the past is no more, the future does not exist, and the present escapes before being recognised? And such also is the nature of the creature which lives in time,—condemned to grow or to perish without rest and without certain stability. It is therefore fit that the bodies of animals and plants, obliged to follow a sort of current, and carried away by the motion which leads them to birth or to death, should live in the midst of surroundings whose nature is in accord with beings subject to change. 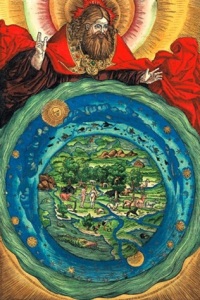 Time, and thus life and death, are part of the very nature of God’s good creation. Creation has a purpose. Later on we (v. 26-28) will read that human beings, male and female, are placed into this training ground with a vocation as the image of God to “be fruitful and increase in number; fill the earth and subdue it. Rule over the fish in the sea and the birds in the sky and over every living creature that moves on the ground.“

Thus the writer who wisely tells us of the birth of the Universe does not fail to put these words at the head of the narrative. “In the beginning God created;” that is to say, in the beginning of time. Therefore, if he makes the world appear in the beginning, it is not a proof that its birth has preceded that of all other things that were made. He only wishes to tell us that, after the invisible and intellectual world, the visible world, the world of the senses, began to exist.

In the beginning the visible, time-bound world of senses began to exist through the power of the creator. At the end of his discourse on 1:1 Basil concludes:

Thus then, if it is said, “In the beginning God created,” it is to teach us that at the will of God the world arose in less than an instant, and it is to convey this meaning more clearly that other interpreters have said: “God made summarily” that is to say all at once and in a moment. But enough concerning the beginning, if only to put a few points out of many.

The power of God’s creation is conveyed here … Basil assumes that the Moses is the author of Genesis, in common with many throughout church history. But the point here is the artistry of creation:

Moses almost shows us the finger of the supreme artisan taking possession of the substance of the universe, forming the different parts in one perfect accord, and making a harmonious symphony result from the whole. (p. 56)

God created and it is good. It serves the purposes for which God created it. It is “a school and training place where the souls of [humans] should be taught.” Creation was not intended as a death-free eternal paradise for immortal creatures of all sorts, but a training ground for humanity. Animal death at least is part of a time-bound creation. Writing much later (about 1200 years later) John Calvin acknowledged this in his commentary on Genesis 3. Although human death is, according to Calvin, the result of disobedience, eternal existence on this time-bound earth was never the plan. Calvin wrote: “Truly the first man would have passed to a better life, had he remained upright; but there would have been no separation of the soul from the body, no corruption, no kind of destruction, and, in short, no violent change.“

Perhaps creation was always intended as a school. A training ground for humanity in preparation for the age to come. It is worth considering anyway. It is not a new idea…

You may also comment on A Training Ground? at Jesus Creed.

This entry was posted in Creation, Genesis and tagged Basil the Great. Bookmark the permalink.
%d bloggers like this: