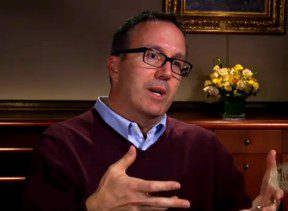 A scientist tells God that he’s figured out how to create life from the dust of the ground, just like God did in the beginning. Consequently, the scientist says, he’s shown that God is no longer a plausible hypothesis for the origin of life. Impressed, the Lord tells the scientist to do it again; he’d like to watch. So the scientist picks up a handful of dirt. But the Lord stops him right there.

This sets the stage for much of the chapter entitled “Believolution.” God is the creator of all – and he is a competent creator. He is involved in the natural, not only the supernatural. He is behind the process, not only the outcome. “A natural explanation is not a godless explanation because God made nature. The natural world is evidence of his mind-blowing skill.” (p. 70) Here I will highlight three points Harrell makes in this chapter.

God as Relational. Harrell goes on to give a clear explanation of one of the key points – one that I try to make fairly often when discussing the issue of creation and origins.

God’s competence does not negate intervention. God does intervene after creation, but his intervention is not to repair, but to relate. Having made his world, he intends to enjoy it not abandon it. Maybe a better word than intervention would be the world involvement. (p. 70)

When we think of God as creator, and as sovereign, we also need to step back and think about God in relationship with his creation and with his creatures. When miracles happen they always happen for a specific purpose of God in the context of this relationship.

Harrell here turns to the Trinity. Harrell points out that we cannot explain the Trinity, and this it important. The Trinity (like many other aspects of God) “defies human explanation, [and] therefore defies human control and exploitation.“

For Christians faith in God as Trinity means faith in God as personal (or as I mentioned before, tri-personal). God exists in eternal relationship. As personal, God could never be detached from his creation. As personal, God cares for creation. The Trinity is an eternal relationship of persons, a three-in-one community of love so bound together yet so abounding that the love happily spills over into a creation that God can’t help but love too. Created by God, his creation bears the mark of relationality. Everything in nature is interconnected. The relational God creates a relational creation as an expression of himself. (p. 73)

God created people to enjoy relationship with each other and with God. Relationality runs through the whole Christian story. God is not a distant deity, desiring only worship and adoration …he is in relationship with his creation from Genesis through Revelation: Creation, Garden, Israel, Exile, Incarnation, Church, and on.

Apparent Randomness and Freedom. Here Harrell notes that randomness can be used for a purpose. An honest casino operator allows the fair and random roll of the dice, but the outcome is certain. If people come, the casino will make money. Like a casino, evolution’s freedom or randomness occurs within limits, and as Christians we believe that God designed those limits with all of creation.

Even given the randomness of the evolutionary process, why would we think that this rules out action of God? Harrell points to two incidents recorded in scripture (1 Chron. 25:8 and Acts 1:26). In what way did God control the casting of lots? Although we would look at the casting of lots as a random selection procedure both David and his people and the Apostles expected God to be behind the outcome of this “random” selection. But no scientific analysis should be able to detect a bias in the selection.

Beyond the question of randomness, Harrell also reflects on the nature of God’s control. Here he makes a key point I think worth some discussion.

While at times we may speak of God’s will in terms of a detailed plan, our experience is more often that of a range of possibilities. We decide to take a job as an engineer, a chemist, or a dog walker based on personal assessment, preference, and variables such as salary levels and what might please Mom and Dad. Choosing between a psychology major or a business major, marrying this person or that – all of these are choices we make of our own free will (as far as we can tell). Even the decision to believe in God is a choice freely made (Rom 1:10-13). However, just because every human choice, process, and outcome are not divinely predetermined (as far as we can tell), does not mean that such choices, processes, and outcomes are not a part of God’s will. (p. 79-80)

He goes on to use an analogy I find quite useful as we reflect on the scope and nature of God and his relationship with his creation.

What if God is like a grand-master chess player playing with an eight-year-old novice? The game has its rules and regularities (created by God), such that whatever move the eight-year-old makes, the grand master already knows its outcome. There’s no doubt who will win in the end. Likewise, with human freedom and evolutionary processes (the eight-year-old novices in this analogy), God knows what will happen in any scenario with any moves that are made. He can make any of them work for his victory. (p. 80)

The mismatch between God and his creatures is so great that, while we have real freedom to choose, the ultimate outcome is never in any doubt. The point is not the precise move of every chess piece given each range of possibilities, but the ultimate outcome of the game. Creation is far more complex than a chess game the range of possibilities many orders of magnitude larger – but yet not too large or too complex for God.

Finally – the question of Adam and Eve. Harrell discusses Genesis 1, but we all know that the major hang-up for many is the creation of humans. In what way are humans special, unique, created in the image of God? In the video below he comments briefly on the issue of Adam and Eve.

Harrell is willing to leave a range of possibilities on the table. Some require stretching of the scientific evidence to achieve agreement with a particular interpretation of scripture, some require more reinterpretation of scripture – but none are in direct conflict with either science or scripture. God could have selected a pair, Adam could be a federal representative of humankind, among other possibilities. He also discusses the relationship of body and soul. There is no clear distinction, in scripture or in science. We are embodied souls. Mind and matter are inextricably linked – although ideas, thoughts, and information can change the outcome of material processes. Harrell remains convinced (as do many of us) that humankind is unique, created in the image of God, but this does not rule out natural, including evolutionary, processes. Only God can destroy the soul – “that is, only God can kill the relationship forever between himself and those who reject him. This he does by “destroy[ing] both soul and body in hell.” (Mt 10:28 – emphasis from Harrell p. 90).

He wraps up the chapter:

If God created the heavens and the earth and made people in his own image, as the Bible teaches, and if sceince is essentially right in its description of earth’s formation and life’s evolution, then God is the God of evolution. Without God there would be no evolution. To believe in God is not to reject science any more than it is to believe that science teaches is to reject God. … The tendency is to fear scientific advancement because of the presumption that each scientific advance squeezes God further out of the picture. But if God is the God of all things, then each scientific advancement about nature only further illumines the nature of God. (p. 91)

And a prayer. This doesn’t answer all questions – we are left with issues of time, perhaps waste, the occurrence of cancer, birth defects, earthquakes, tornadoes, and tsunamis. There is much that remains for discussion. Chapter 6 poses many of these questions in the context of a prayer – asking God about the issues that remain mysterious and troublesome. The point is that we respond, not in fear, but in faith and ask God for guidance and wisdom.

“Lord, you have been our dwelling place throughout all generations. Before the mountains were born or you brought forth the earth and the world, from everlasting to everlasting you are God” (Ps 90:1-2 NIV). I will deal with the dissonance by standing firm in my faith. I will seek you with my whole heart. I will persist in my prayer. (p. 102)

Does the connection of God as Trinity with creation as relational at its core make sense?

What does it mean to say that we were made for relationship – or, for that matter, that God is Love?

Does the analogy with a chess game between a child and a grand master help with an understanding of both openness and sovereignty in creation?

You may also comment on God, A Competent Creator! at Jesus Creed.