The Bible For Today 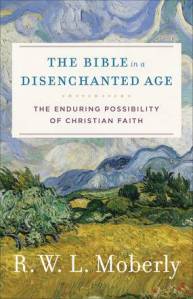 I recently picked up a book by R. W. L. Moberly The Bible in a Disenchanted Age, relatively new – published early 2018. Marianne Meye Thompson writes in her blurb for the book:

In this gem of a book, Walter Moberly addresses the difficult question of what it might mean to trust the Bible in an era marked by distrust, particularly when any sort of religious claim is at stake. With his characteristic clarity, candor, breadth of learning, and intellectual generosity, Moberly proves a sure-footed guide through the thicket of challenges to trusting both the Bible and the God to whom it bears witness.

The book caught my eye for a few different reasons. I’ve read a couple of books by Walter Moberly and have found him both thought-provoking and faithful. The title of the book and the blurb by Thompson point to another. We live in an age when the Bible is distrusted more than revered. A simple “the Bible Says” may work in church, but it doesn’t work in the secular world. We need to think more carefully about the foundation of our faith and the nature of the Bible. According to many the bible has cultural and historical significance – but should be read like any other ancient text.

Why do we, in the twenty first century, still privilege the ancient writings contained in the Bible?

Moberly points to Charles Taylor’s “A Secular Age.” Secularization is accompanied by disenchantment. Meaning is a human construct. “People no longer discern meaning in the world, but rather impose meaning on things that are external to themselves.” (p. 26) Religion and language about god is a human construction – valued for the meaning it imposes on the world.

As Christians we believe that the God of the bible is fundamentally different from Jupiter in the Aeneid (an example Moberly develops). How do we defend that belief? This is a challenge we need to consider.

[I]f Christian scholars continue to believe that the God of the Bible is, in some way, the one true God, will they offer a sufficient account of why this is warranted in relation to other deities of the ancient world in whom they do not believe – and relatedly, discuss how the way they study the Bible is commensurate with their belief in its God? (p. 29)

In the Aeneid we read how Jupiter describes the beginning of a endless sovereignty on a chosen people (the Romans). In the Bible (see for instance Daniel 7) we read how God bestows an endless sovereignty on “the holy people of the Most High.” Why is one dismissed, while we search for meaning in the other? (Image to the right is a 12th century illustration of Daniel’s beasts from Wikimedia)

This is not where I want to end. But unless we begin here, we may be in danger of not engaging properly with at least some of the real challenges inherent in the question of how and why it can be meaningful and realistic for people today to believe in the God of the Bible. (p. 36)

Understanding God for today and the Bible for today are part and parcel of the same endeavor. It will be interesting to see where Moberly takes this quest for understanding. The simple answers of conservative Christianity (fundamentalism) leave many of us unconvinced – and gain little traction in the secular world. The skeptics simply dismiss the question and cast the quest for meaning outside of human making into the trash heap.

How do we know God?

Why do we privilege the Bible?

You may also comment on The Bible For Today at Jesus Creed.

This entry was posted in Bible, Uncategorized and tagged Walter Moberly. Bookmark the permalink.
%d bloggers like this: