More on Reading the Bible 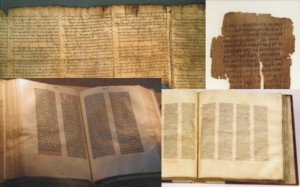 The Bible is the central document of the Christian faith. It is, we believe, more than just another ancient text. It is more than a human record of the past. It is also less than perfectly clear. This isn’t some kind of well written set of propositions to guide life. But it is centered on God’s revelation of his work in the world. Several years ago I read an interesting little book by John Polkinghorne, theoretical physicist turned priest, Testing Scripture: A Scientist Explores the Bible. In chapter 4 he explores the ambiguity he finds in the bible. It is worth looking at again.

The tapestry of life is not coloured in simple black and white, representing an unambiguous choice between the unequivocally bad and the unequivocally good. The ambiguity of human deeds and desires means that life includes many shades of grey. What is true of life in general is true also of the bible in particular. An honest reading of scripture will acknowledge the presence in its pages of various kinds of ambiguity. (p. 33)

In many ways ambiguity simply means real life, the incidents and characters in scripture are multidimensional. Even the best of humans are not all good and fail at times, sometimes quite spectacularly. Abraham, Isaac, Jacob, and David are good examples here. They lie, they steal, they swindle, they murder and they benefit from their deceit. The bible whitewashes none of this.

The violence and the outworking of justice in the Old Testament provide other examples of ambiguity. Achan died for his theft and deceit, and his family died with him despite the fact that he confessed when confronted (Joshua 7). David suffered no such fate for violating God’s commandments (2 Sam 11-12). Jesus, Matthew tells us, is descended from Solomon, son of David by Uriah’s wife. (Luke has the descent of Jesus run though Nathan to David, avoiding Solomon … another kind of ambiguity to consider).

Do you see ambiguity in scripture? If so, where?

There are other aspects to the ambiguity in scripture, aspects that deal with God and the character of God. Dr. Polkinghorne begins with Genesis 22 where God tested Abraham telling him to sacrifice Isaac on an altar at Mount Moriah. This story seems pointless and unnecessarily severe. Perhaps this story was intended to teach Israel that the child sacrifice practiced by neighboring nations was not God’s will. Perhaps we should read it Christologically. The story of Abraham and Isaac is a type (a symbolically anticipatory event) of the death of Christ on the cross. But there is ambiguity in the event and in its purpose.

Dr. Polkinghorne sees ambiguity as well in some of the NT stories of the life of Jesus.

The miracle at the wedding at Cana seems out of place. Is this a matter of fact report of a miracle at the beginning of the ministry of Jesus? The placement in John just before the cleansing of the Temple must have a symbolic purpose. Is the transformation of water to wine a real event? Or could it be a symbolic narrative incorporated as if enacted to make a point about Jesus? Of course it could be both – an enacted symbolic event.

The interaction between Jesus and the Canaanite woman in Matthew 15:21-28 is another incident Dr. Polkinghorne finds ambiguous. He suggests that Jesus in his humanity was unsure what to do in this instance. Jesus was persuaded to action by the woman’s bold stance.

Judas Iscariot is an ambiguous character. He was chosen by Jesus and yet he betrayed Jesus.

Much Christian thinking has seen Judas as wholly evil from the start, as if he were a kind of devil incarnate. I do not think this is credible in the light of his having been chosen by Jesus. I find helpful the interpretation of Judas offered by Dorothy Sayers in her play-cycle about Jesus, The Man Born to be King. She suggests that Judas, like Peter, found it difficult to accept that Jesus was not going to be a militant Messiah who would destroy the forces of the Roman occupying power, but that he was to be a crucified Messiah, accepting the way of the suffering (Mark 8:31-33). (p. 39)

Perhaps Judas tried to force the matter and when it led to crucifixion he was overcome by remorse and driven to suicide. (Mt 27:1-5)

The ambiguity doesn’t end with the gospels. Dr. Polkinghorne also sees ambiguity in the writings of Paul. Paul wrestles around many different issues, at times his deep humanity and his struggles show through, at other times he writes with deep theological insight.

The presence of ambiguity in the text of scripture should shape our approach to scripture. The bible is not an answer book for all of life’s problems and questions, but a window on God’s interactions with is people and their reaction, good bad, and indifferent with shades of grey.

Do you find any of the ambiguities in scripture troubling? If so, what and why?.

What attitude should we take as we study and meditate on scripture?

You may also comment on More on Reading the Bible at Jesus Creed.

This is a lightly edited repost.