This is the third post in a short series on the book of Acts, was written by a Christian colleague (JAG) who teaches in the School of Social Work. Both his professional expertise and his personal experience as a second generation immigrant shape his understanding of the book and bring insights that will help all of us read the book better. He presented the material in a well received class at our church and I am pleased to bring it here as well. RJS

The ministry of the Apostle Paul is essentially the Seven Deacons’ service raised to the next level. In this post we will explore some of the ways in which Paul builds on Stephen’s insight throughout his missionary journeys (Acts 8-26).

A Personal Re-introduction: An American (Citizen) in Manila?

Our family vacation in the Philippines coincided with the onset of Martial Law. My Dad was proud of his naturalized US citizenship (“I know more about this country than people who were born here”) and he often repeated my birthright – he could never be elected president, but I could. Dad even speculated that our citizenship might offer some protection should we encounter violent political unrest.

I spent much of that summer in Manila with my Favorite Aunt. She went to college in the US and had clear ties to the Marcos opposition party. Together we watched a lot of movies. She showed me a review of “The Exorcist” from a local newspaper published in English. The critic’s tone surprised me. Why are American audiences so terrified by this storyline? Here in the Philippines we have any number of faith healers who are more than up to this task.

My story re-visits several aspects in our discussion of Acts to date: language, place of residence, generations, and politics. It adds citizenship, acknowledging some of its privileges, and depicts a difference in religious tradition – not in-group (recalling how the Jewish community the Jerusalem church drew from included both Sadducees and Pharisees) but in this case, across cultures.

Our first glimpse of Paul is as Saul at Stephen’s martyrdom. As he recounts it in Acts 22:20,

“And when the blood of your witness Stephen was shed, I myself was standing nearby, approving, and guarding the cloaks of those who were killing him.” 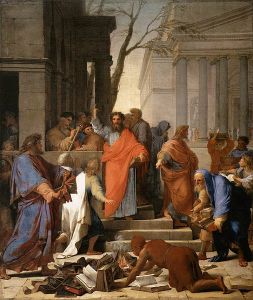 Many of the things I have already noted about Stephen are also true of Paul. Both are Jews, and are able to switch back and forth between Hebrew and Greek languages, as well as Hellenistic and Judaic frames of reference. While we don’t know about Stephen’s formal educational background, we do know Paul is a “Pharisee of Pharisees” and studied under Gamaliel, the well-respected scholar quoted in Acts 5:34-39. I suspect Stephen is not a Roman citizen: Paul is and claims the related privileges at Philippi (Acts 16:37-38), in Jerusalem (Acts 22:25-29), and before Festus and Agrippa (Acts 25:8-27).

First, we must return to Stephen’s original insight and the historical context. In the Roman Empire, ethnic groups were thought to be the people living in a particular geographic region and worshipping a god specific to that area. As a child, I loved reading Greek mythology. Clearly, a given deity had a specific sacred place: Athens was named after Athena, Apollo was consulted at Delphi, and Artemis was worshipped at Ephesus – “Great is Artemis of the Ephesians!” (Acts 19:34).

The thinking, then, that there is One Transcendent God independent of any specific location is so revolutionary that Stephen is martyred for expressing it – especially to Jews whose lifestyle revolved around the Temple at Jerusalem. 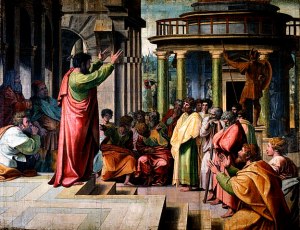 Second, given that Philip has already evangelized Samaria, Paul undertakes his mission “to the ends of the earth.” He does preach, repeatedly, to the Jews first, but with what could be described as mixed results. He also preaches to the Gentiles at Lystra and is dismayed by the results. After performing a miracle, Paul and Barnabas are worshipped as Hermes and Zeus (Acts 14:8-20). Again, returning to my childhood love of Greek mythology, I immediately recalled the story of Baucis and Philemon, retold by the Roman poet, Ovid in Book VIII of The Metamorphoses and specifically set in that area.

A Filipino movie review of “The Exorcist” is not exactly Ovid but does raise a question: Did Paul’s education, formal or informal, omit a survey of religious traditions proximate to Lystra?

Third, I cite Ovid here to introduce Cultural Competence. The National Association of Social Workers considers it one of the profession’s six core values, and their Code of Ethics directs practitioners to “provide services in culturally relevant and meaningful ways.” In Athens, before meeting with the Greeks on the Hill of Mars, Paul does some study of the people, customs and architecture in an attempt to “speak their language.” It should be noted he quotes “one of your own poets” in Acts 17:28 but also two Greek Philosophers, Epimenides and Aratus.

‘For in him we live and move and have our being.’ As some of your own poets have said, ‘We are his offspring.’

On one level, this is the activated triple consciousness of Stephen, Philip, and the other Deacons applied to the mission field. Although not entirely well-received at Wheaton, Soong-Chan Rah offers this advice in his book, The Next Evangelicalism: Freeing the Church from Western Cultural Captivity (2009);

If you are a white Christian wanting to be a missionary in this day and age, and you have never had a nonwhite mentor, then you will not be a missionary. You will be a colonist. (p. 162)

In reflecting on this, I think of the Judaizers who, in my way of thinking, required Gentiles to first become Jews before becoming Christians – because that was their experience.

Indeed this thinking is why the Acts 15 Council of Jerusalem is so monumental. Of the 3000 believers who converted at Pentecost (Acts 2:41), weren’t all 3000 Jewish before Christian?

Or to use the language of colonization, follow my experience, whether or not it is relevant to your situation – or the Holy Spirit’s leading.

Paul’s response in Galatians 5:12 is even more cutting than Rah’s:

As for those agitators, I wish they would go the whole way and emasculate themselves!

Redemptive Analogies – and the Emic/Etic Distinction

In my Social Work classes I sometimes illustrate Cultural Competence by sampling the work of Kenneth Pike. As an undergraduate student, I observed his “monolingual demonstrations.” In 20 minutes, on stage and before a live campus-wide audience, Pike would accurately describe the syntax and basic vocabulary of someone he had not previously met with each speaking in a mutually exclusive language. Two key concepts from Pike inform my own writing and teaching: Etic, from phonetic, and emic, from phonemic. The etic, or outsider approach to another language and culture, emphasizes repeating the sound. I see a tendency towards ethnocentrism in this approach, relating to “the other” as an object of inquiry, with a potential to trend towards “scientific racism,” and if taken to the extreme, even eugenics.

The etic, or insider approach, emphasizes learning the meaning, striving to view the world as “the other” does – using their terms, and not your own. My students have pointed out this approach could tend towards “going native,” uncritically accepting everything the informant states as truth. This would be multiculturalism in the extreme, a kind of political correctness “gone wild.” The approaches can be problematized: Could the object of inquiry become one subject of two subjects in a dialogue, with a potential to trend towards a genuine partnership?

In church settings I add that I met Kenneth Pike during informal Christian faculty-student gatherings. At one large group meeting with students, he encouraged our storytelling about conversations with peers who did not identify as Christian. As with his “monolingual demonstrations,” Pike then related key themes in our narratives to aspects of the gospel, a process he called Redemptive Analogies. I don’t remember if he cited Paul in Athens, however, Pike concluded by rooting his process in Romans 1:20.

For since the creation of the world God’s invisible qualities—his eternal power and divine nature—have been clearly seen, being understood from what has been made, so that people are without excuse (emphasis added).

What have been your most formative educational experiences, either formal or informal?

O Divine Master,
Grant that I may not so much seek
To be consoled as to console;
To be understood, as to understand

You may also comment on Acts, Diversity – and Cultural Competence at Jesus Creed.