Do Christians Hate Us? 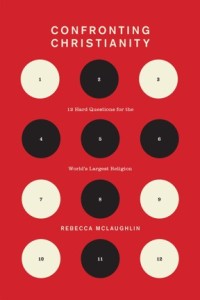 How can you be a Christian?

In my experience there are three big subtexts to this question these days, science, women, and sexuality. Other questions are important as well … but these are the showstoppers.

How can you be a Christian when it is antiscience, oppresses women, and is homophobic?

Rebecca McLaughlin addresses these as seven, eight, and nine in her book Confronting Christianity: 12 Hard Questions for the World’s Largest Religion. We’ve looked at the first two of these, and turn today to the third: Isn’t Christianity homophobic?

Rebecca argues that while Christianity does expect a rather specific sexual morality that limits intimate sexual relations to marriage between a man and a woman, the label ‘homophobic’ overstates the case. You are invited to pick up the book and read her arguments in their entirety. It would make good a good conversation starter for face to face discussion. I find this topic a hard one to address in the rather impersonal forum of a blog.

Rebecca makes a couple of points in the chapter that are worth discussing in this format, however. The focus on sex and sexuality undermines Christian community. We need friends and and extended family who walk along side us. “In modern society, we are led to believe we cannot live without sex. In fact, I believe we are more likely to wither without friend and family love.” (p. 160) Recounting a conversation with a friend, Rebecca continues:

She said it seemed unfair that same-sex-attracted Christians should be sentenced to loneliness. I was reading the book of Acts at the time. I observed that, while the first Christians faced every kind of suffering, even being stoned to death, there was one struggle they did not face: loneliness. If we reduce Christian community to sexual relationships and the nuclear family, we are utterly failing to deliver on biblical ethics.

The point is underlined by the Bible’s view of singleness. Jesus himself never married. While Paul commends marriage, he values singleness more (1 Cor. 7:38). Single people are vital to the church family – which is the primary family unit in Christian terms – and should experience deep love and fellowship with other believers. Where church culture inhibits this by overemphasizing marriage and parenting, Christians need to fight for culture change and embody the biblical reality that the local church is truly their family. Enabling same-sex-attracted Christians who choose to remain single to thrive in church means becoming more biblical, not less.

Many churches do a great disservice to many people with an over emphasis on the importance of an intact nuclear family, mom, dad, 2.5 kids and a couple of cats. (Dogs are OK too – but I prefer cats.) Adults can find themselves single through a wide variety of circumstances. For some marriage just never happens, for others it isn’t an aim as time passes, some are divorced or widowed. A childless couple may have each other, but are all to often excluded as well. Elderly couples can feel the same detachment. But, all should feel welcome and at home in the church. Close friendships should be cultivated rather than avoided. Families grow up. Marriage (at least the sex part of it), after all, is a temporary state … until death do you part. The people of God is forever. Doesn’t Jesus say:

The people of this age marry and are given in marriage. But those who are considered worthy of taking part in the age to come and in the resurrection from the dead will neither marry nor be given in marriage, and they can no longer die; for they are like the angels. They are God’s children, since they are children of the resurrection. Luke 20:34-36 (see also Mt. 22:29-30 and Mk 12:22-25)

There is much more that could be discussed. But this is enough for now and for this format.

What can we do in the church to foster community for all?

Is this even a role for the church?

You may also comment on Do Christians Hate Us? at Jesus Creed.

This entry was posted in Christianity and tagged Rebecca McLaughlin. Bookmark the permalink.
%d bloggers like this: