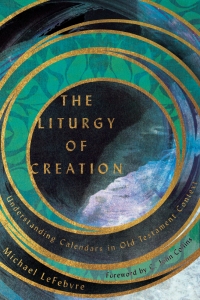 We have been slowly working through a new book, The Liturgy of Creation by Michael LeFebvre. The central premise of this book is that we will best understand Genesis 1 when we first understand how calendars work in the Old Testament. The calendars present in the Pentateuch, established to govern cycles of life in ancient Israel, are fundamentally different than ‘scientific’ calendars of our modern world.

Some of LeFebvre’s points challenge preconceptions – for example, he argues that the day in Genesis 1 doesn’t run from evening to evening, that this is a misinterpretation of the text. Rather he argues that “the Hebrew day began at sunrise and ended at sunset. The nighttime that followed sunset was technically marginal time rather than a part of any day.” (p. 16) Activities occurring during the dark of night might be considered part of the preceding or succeeding day depending on the circumstance.

Moving on from days to weeks, months, and years: The Hebrew calendar focuses on cycles of seven. Days are grouped into a seven day week capped by the Sabbath. This remains a clear foundation for our calendar today, but the focus on seven as the complete number goes beyond the length of a week. LeFebvre argues that the ‘proper year’ is composed of seven months. The year begins with the vernal equinox and goes out with the autumnal equinox. All of the festivals occur during this period. The first seven months of each year comprise the festival year, or the proper year.

The rainy season [autumn to spring] filled a marginal period at the close of the year and was counted  as part of the previous year “by addendum,” the same way the night filled the marginal time at the end of the day. All of Israel’s major festivals were completed within those seven dry months of the “proper year,” and there were no festivals (apart from new moon days) during the rainy season. (p. 29)

The years are grouped into a cycle of seven with the seventh year a sabbath where the land is allowed to rest.  This would not necessarily mean the cessation of all planting. LeFebvre suggests that family gardens would still be allowed for example. But it would be “a cessation of economic production. … The sabbath year was not a year to starve but rather to cease using the land for production-scale farming.” (p. 32) The land would cease its labor. The observance of the sabbath year was part of an effective stewardship of the land “for fruitfulness in cooperation with the cadences of God’s blessing on it.” (p. 32)

Every seventh sabbath year (i.e. every 49th year) was designated a jubilee year. Given typical life-spans, this was a once a generation occurrence.  If observed, it would serve to damp out economic disparity and oppression. Similar cycles – generally tied to the coronation of a new king – existed in other ancient Near Eastern societies. The Israelites, without a king, relied on the Mosaic calendar to preserve equity in community as God intended. The jubilee would preserve the equitable distribution of wealth and land established when the Israelites first entered the land. Thus, “the jubilee, with its generational timing, was an important part of the cadences put in place by the calendar to ensure the people labored in harmony with God’s blessing on their fruitfulness.” (p. 36) The lack of evidence that the year of jubilee was ever observed may provide yet another indication of persistent human inability to follow God’s laws.

The calendar is not merely a cycle of days and months and years. God redeemed his people and led them to the land of milk and honey where they could thrive and prosper. The calendar as outlined in the Pentateuch served to establish and guide Israel’s fruitfulness in the land.

I welcome comments that enlighten us on the topic or ask questions. Expressions of disagreement, agreement, and elaboration are also welcome. Comments are moderated and comments that are excessively long, are abusive or aggressive, or are off-topic will not appear. Imagine that you are holding a conversation over coffee with a friend and you want to remain friends.

(The link above is a paid referral – try this one if you prefer: The Liturgy of Creation.)

This entry was posted in Bible, Genesis and tagged Michael LeFebvre. Bookmark the permalink.
%d bloggers like this: