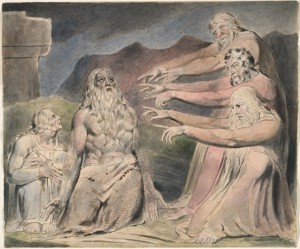 The book of Job is a truly amazing part of Scripture. The book strikes me as one of the most significant, misunderstood, and under appreciated, books in the entire Bible. I’ve turned to it many times over the last 8 or 9  years, since I first read the book through in its entirety – both the boring speeches and the more exciting parts. Quite frankly, it overturned many of my preconceptions about God and about the nature of Scripture as the word of God. Although it has been offered as a guide to those in the midst of suffering, it doesn’t really work well for one who is actually suffering. It is a bit too cerebral and detached. It works better as a preparation for the times of suffering that come inevitably to all of us sooner or later.

Lately I’ve been drawn to the book once again, thinking about everything that is going on in our world. Uncertainty rules as we don’t really know what tomorrow will bring. For a guide to Job, I generally turn to two commentaries, one by Tremper Longman III (Job (Baker Commentary on the Old Testament Wisdom and Psalms)) and one by John Walton (Job (The NIV Application Commentary)) as well as a much shorter popular book they teamed up to write How to Read Job. This time through I have yet a third commentary, The entry on Job by August H. Konkel in Job, Ecclesiastes, Song of Songs (Cornerstone Biblical Commentary).

Today we will turn to the introduction to the book provided by Walton and Longman in Part One of How to Read Job. I’ve posted on this before and what follows is an edited version of that post. The book of Job is not history and it is not, actually, about Job. Both Walton and Longman agree that the book of Job is about God and the way God runs the world. They argue that two major questions drive the book. First: Is it good policy for God to bless the righteous? Blessing the righteous just buys pseudo-loyalty doesn’t it? And second, Is it it just when God allows righteous people to suffer?

I think we can take these questions and pose some additional questions that encompass all of Scripture. Why did God create humans capable of sin? Why was the snake in the garden? Why do the wicked prosper? Why does God show mercy? Why are there tsunamis, earthquakes, hurricanes and tornadoes? Why does God allow a virus to spread throughout the world, sickening and killing many, disrupting the lives and financial security of many more? All of these bear on the larger question of how God runs the world. It isn’t always clear from a human perspective. 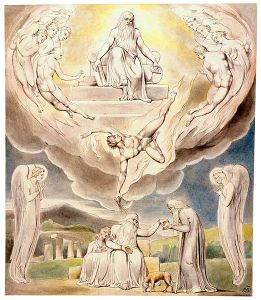 The book of Job is a work of theological literature. Both Longman and Walton see it as a sophisticated and carefully constructed work. The book consists of a prologue and opening lament (ch. 1-3), a cycle of dialogue between Job and his three friends (ch. 4-27), a wisdom hymn (28), a discourse by Job (ch. 29-31), a discourse by Elihu (ch. 32-37), a discourse by God (ch. 38-41) and an closing and epilogue (ch. 42). (The drawings in this post are by William Blake – available on Wikipedia.)

Though many modern interpreters have found the book lacking in cohesiveness, we would contend that each of these components of the book plays a significant role in the development of the book’s purpose. The various styles of literature used by the book include dialogue, discourse, narrative, hymn, and lament. All of these are woven together into a poignant piece of wisdom literature. None of these parts can be easily written off as later additions or as redundant once we understand the role that each plays in the book. (p. 20)

While the book of Job fits into the larger world of ancient Near Eastern literature, it is distinctly different in the way it portrays Job and God. Job thinks like an Israelite. God alone is wise. The book doesn’t mirror the surrounding views – in a sense it responds to them.

Walton and Longman point out out several ways the text responds to the culture, including the following: (1) There is no “great symbiosis” because God does not have needs for humans to satisfy. (2) The text is interested in the justice of God, while just gods are not a concern in the ancient Near East. (3) The text is concerned with righteousness as an abstract concept, and one that goes beyond the ancient world. (4) No ritual offenses are considered (contrary to the literary parallels). (5) Divine wisdom is a major theme.

The book of Job is not history. The character of Job may or may not be based on a real person known to the original author and audience – by reputation at least. It doesn’t matter. Longman and Walton don’t mince words here: “this book is manifestly and unarguably in the genre category of wisdom literature rather than historical literature.” (p. 35) And a little later on the same page, “We would be mistaken to think that the author seeks to unfold a series of historical events.” (p. 35) They run through some of the reasons for this conclusion (for example, no stenographer recording heavenly prologue or the dialogues). The excessive extremes that frame the story. Job is exceedingly wealthy, he is undeniably righteous, no space is left for easy outs. The reader must grapple with the central question.

We therefore adopt the position that, though Job himself may have been a real person who actually lived, the rest of the book is a literary work of art providing a wisdom discussion that is framed by extremes. … This allows us to consider the extreme and artificial scenario the author has constructed so that we can engage in a deep investigation of an important philosophical issue without having to continually cope with the muddied waters of the normal ambiguities of people and their circumstances. Whether we label it a thought experiment or simply a hypothetical scenario built around extremes, we can encounter the God-given message of the text undistracted from incidental curiosities and without the angst that comes with wondering why God killed Job’s children. (p. 39)

I suppose that we could argue that God should not have allowed (or inspired) the original author to include such troubling elements as the wager with the challenger and the killing of Job’s children. However, this may well be imposing modern sensibilities on an ancient text. We find these to be distractors, but they need to be taken for their literary intent as extremes not as moral statements.

The book of Job is, as Konkel puts it in his introduction, “a profound reflection on the mysteries of the divine order.” (p. 3) Something we would do well to grapple with today without chasing down  a myriad of dead end rabbit holes.

This post is also visible at Jesus Creed now at Christianity Today.

I welcome comments that enlighten us on the topic or ask questions. Expressions of disagreement, agreement, and elaboration are also welcome. Comments are moderated and comments that are excessively long, are abusive or aggressive, or are off-topic will not appear. Imagine that you are holding a conversation over coffee with a friend and you want to remain friends. Your first comment will be held for moderation – subsequent comments will usually appear automatically.

This entry was posted in Job and tagged Job. Bookmark the permalink.