When God Began to Create?

Well, as it happens there is some uncertainty in the translation of these verses. We don’t have the original text. Hebrew doesn’t make vowels explicit and there is more than one plausible way to place the vowel in the text. These change the nuanced meaning of the text. It is also not clear whether the first verse is an independent sentence and what follows a description of the creation in the rest of the chapter, or whether the first clause leads into the second and third verses.  The NRSV translates this section as:

In the beginning when God created the heavens and the earth, the earth was a formless void and darkness covered the face of the deep, while a wind from God swept over the face of the waters. Then God said, “Let there be light”; and there was light.

This translation emphases the initial darkness and lack of form. The creation story begins as God brings light to the face of the earth. The NIV is slightly different, verses 1 and 2 set the scene, with verse 1 perhaps a heading.

In the beginning God created the heavens and the earth. Now the earth was formless and empty, darkness was over the surface of the deep, and the Spirit of God was hovering over the waters.
And God said, “Let there be light,” and there was light. 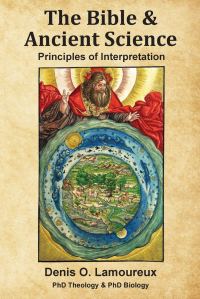 No matter which translation is best, one thing is crystal clear. God alone is present at the beginning of the human story and the world is shaped and formed according to his will and plan. Denis Lamoureux (The Bible & Ancient Science) emphasizes this point. The message of faith in this text does not rely on creation out of nothing (this can be supported by other parts of Scripture). It does rely on the sole primacy of the God of the Bible, the God who called Abraham and established Israel, in creation.

Denis uses these verses to make another important point.

Second, I came to realize that biblical interpretation always begins with submitting to the very words in the Word of God. We may not like the idea that we do not know with absolute certainty how to translate the first verse of the Bible, but this is the biblical evidence that exists so far. And even if we are troubled by this evidence, we need to accept it despite our assumptions and expectations about how we think the Holy Spirit is supposed to have revealed in Scripture. (p. 79)

We are not called to shoehorn Scripture into the mold we desire, but to read it for the message about God and his work in his world and through his people.   The most accurate interpretation of Genesis, based on the best information we have today, is that it describes creation from a pre-creative state. That God is responsible for this pre-creative state can be learned from other passages, but it isn’t important to the message of Genesis 1. As Christians, Hebrews 11:3 gives us a start on creation from nothing. “By faith we understand that the universe was formed (or the worlds were formed) at God’s command, so that what is seen was not made out of what was visible.” Colossians 1:15-16  is even more explicit.

The Son is the image of the invisible God, the firstborn over all creation. For in him all things were created: things in heaven and on earth, visible and invisible, whether thrones or powers or rulers or authorities; all things have been created through him and for him. He is before all things, and in him all things hold together.

But here the focus is on Jesus as the one in whom all was created. Revelation is progressive. Genesis 1 is focused on the ordering and function of creation, setting up the story.  It assumes some kind of a pre-creative state, but this is incidental to the intent of the passage. It is formless and void. And God said, Let there be light.

Is the idea that Genesis 1 describes the ordering and creation of function rather than the creation of matter troubling?

What does it mean to submit to the Bible as the Word of God?