Rhetoric for Impact or Commands? 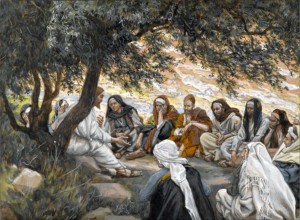 Does faith in Jesus call women to stay with an abusive husband, men to mutilate themselves, and all of us to take a vow of poverty?

The teachings of Jesus in passages like those below have been interpreted in this way, although the last two suggestions (mutilation and poverty) are almost universally dismissed in our church today. The first is also dismissed by most of us. But this leads to a question for us to consider: Does Jesus use rhetoric to shock his audience (especially his followers) into thinking about what it really means to follow him?

Consider the following passages. In the Sermon on the Mount Jesus is recorded as saying

There have been those in the history of the church who have taken this command seriously at some level, and it has bothered multitudes more. Did he really teach that men should mutilate themselves to avoid lustful thoughts and avoid hell? A commenter on my last post suggested that it is appalling that Christians teach this passage to their sons.

And for our daughters …

“You have heard that it was said, ‘Eye for eye, and tooth for tooth.’  But I tell you, do not resist an evil person. If anyone slaps you on the right cheek, turn to them the other cheek also. (5:38-39)

This passage, alongside teachings on divorce, especially Mk. 10:10-12, has led some to proclaim that a woman must remain with an abusive husband.

What is a faithful Christian woman to do when confronted with physical or emotional abuse?

And when is comes to wealth, the passages are even stronger. In the Sermon on the Mount we read:

“No one can serve two masters. Either you will hate the one and love the other, or you will be devoted to the one and despise the other. You cannot serve both God and money. (6:24)

“Do not be afraid, little flock, for your Father has been pleased to give you the kingdom. Sell your possessions and give to the poor. Provide purses for yourselves that will not wear out, a treasure in heaven that will never fail, where no thief comes near and no moth destroys. For where your treasure is, there your heart will be also.

Jesus answered, “If you want to be perfect, go, sell your possessions and give to the poor, and you will have treasure in heaven. Then come, follow me.” When the young man heard this, he went away sad, because he had great wealth.

Not much wiggle room in “sell your possessions and give to the poor.” Does Jesus really demand a vow of poverty, giving all away to follow him?

Jesus goes on to elaborate:

When the disciples heard this, they were greatly astonished and asked, “Who then can be saved?” Jesus looked at them and said, “With man this is impossible, but with God all things are possible.” (19:25-26)

It certainly is God who saves, but I doubt that Jesus meant that God would make it possible to pursue both God and wealth.

In statements like these, is Jesus laying down commands or using rhetoric to make his followers think?

This entry was posted in Bible. Bookmark the permalink.

1 Response to Rhetoric for Impact or Commands?