Polkinghorne on a Destiny Beyond Death 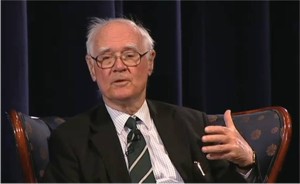 This last week I have been spending my commute listening to the audio recordings of a series of lectures given by John Polkinghorne last November at Point Loma Nazarene University (available on the PLNU website here). There is much to ponder in these lectures, and fuel for several posts. The lecture on Prayer and Providence is one I will come back to in the future. Today, in the wake of the discussion of universalism and Rob Bell’s upcoming book, I would like to consider the final lecture in the series where Dr. Polkinghorne ruminates on the subject of A Destiny Beyond Death.

In some sense the question is quite simple. We know that there will be a continued existence after death, Jesus in response to the Sadducees, when confronted with a puzzle about the confusion that an afterlife must cause, put it quite clearly:

But digging deeper into the topic there are a number of profound questions. Dr. Polkinghorne is quick to point out that he may be mistaken on some of his positions. These are questions, for the most part, where we cannot know the answer with clarity and confidence in this life. Yet we can and should consider the questions and the potential answers.  Perhaps the best we can do is to offer some idealized models, thought experiments, that  help us to ponder the nature of God and his reality.

Dr. Polkinghorne rests his thinking here on two pillars – the faithfulness of God and the way that faithfulness was demonstrated in the resurrection of the Lord Jesus. This lecture, like all of Dr. Polkinghorne’s lectures and writings, is thought provoking and full of insights. I don’t agree with Dr. Polkinghorne on all of his positions, but he is always worth careful consideration and interaction.

What is the most perplexing question raised by the thought of a destiny beyond death?

Continuity. One question brought to the forefront when considering a destiny beyond death is the form the continuity between our existence in the world today and our existence in the age to come, in traditional Christian terms, this is the soul. Dr. Polkinghorne considers the soul as something not detached or detachable from the body, we are a package deal, psychosomatic unities. We are animated bodies, not incarnated souls. The Platonic ideal of a soul freed from the flesh at death makes no sense scientifically or theologically. The soul, that which makes us human and unique as humans, is the sum total of our thoughts, deeds, character and relationships. The human soul has no natural immortality and a human life after death must include a re-embodied existence by act of God. The Christian form of our hope for the future is resurrection.

Of course this immediately raises the question: If the new creation does not involve death and decay, if God can create such a world, why did God bring into existence an initial  creation with death and decay? Dr. Polkinghorne suggests that this is part of God’s plan – if not a philosophical necessity, a practical one. This is the way that God, in his infinite wisdom and love, deemed best.

(20:44) I think the answer to that question lies in recognizing that God’s creative purposes are intrinsically two step. God’s ultimate purpose is to draw all beings who would accept the divine offer of mercy and love, draw all beings into the closest possible relationship with the life of their creator. But they have to enter freely into that relationship. And that means we have to at first exist at some distance from our creator. The infinite presence of God has to some extent to be veiled from the sight of finite creatures because otherwise we would just be overwhelmed by that infinite presence. So God first brings into being in my view a creation, the present creation, the old creation, which exists at some distance from the divine reality. And in which creatures are therefore given the space, the freedom to be themselves, and indeed I would say, to make themselves. I think the theological way of thinking about evolution is that it is the process by which the creators endowment of potentiality is brought to birth by creatures being allowed to make themselves, by exploring and bringing that potentiality to birth. So that is the world in which we live. That is the first step of God’s creative purposes. “

The process of becoming, of growing, of developing character, of choosing, of acting, of being, is a necessary first step in God’s creative plan. Humans, conscious and aware, capable of choice, agency, and creativity, capable of a loving relationship woth each other and with the creator are an intentional product of the creation. The ultimate goal is to draw all into a closer relationship in an new creation without death and decay.

Hell and Judgment. But where does this leave us on issues such as heaven, hell, judgment and redemption? This is one of the biggest questions facing many Christians today. In some traditional views God’s plan for the future is limited only to a few who are chosen by circumstance of time, place, and situation to be aware of and open to the gospel. This seems capricious and contrary to the nature of God seen in the person of Jesus. Jesus tells his disciples in John 14 “If you had known Me, you would have known My Father also; from now on you know Him, and have seen Him.” and “He who has seen Me has seen the Father.”  We look to Jesus, his life, his teaching, his death and resurrection, to understand God, the plan, purpose, and divine nature of God. This then should shape some of our thinking about hell and judgment. God became man, dwelt among us, suffered and died as a consequence of and for our sins.

Dr. Polkinghorne continues in this lecture to reflect on the nature of the world to come in light of the divine nature of God. He is not a universalist but does see the love and purpose of God as the overall theme that governs thinking about these issues.

(27:55) The next thing I want to say is that I think there is another important continuity between this world and the world to come, a continuity in the divine nature itself. And that is, I think that God’s love and mercy is unending in that respect. So I don’t think that the divine offer of life and of redemption is for this world only. It isn’t and 80 year limited offer, buy now. I don’t for a minute mean by saying that that it doesn’t matter what you think and do in this world.  If you deliberately turn from God in this world, that is spiritually damaging, and it will make it more painful and more difficult to turn to God in the clearer light of the world to come. But I do not think myself, I am sure not everyone here will agree with me about this,  I do not myself think that a curtain comes down at death and if you’re on the wrong side of it God says OK, you’ve had your chance, you missed it. That doesn’t seem to be the God and Father of our Lord Jesus Christ. I think God’s love and mercy is not withdrawn in that sort of way because after all there are many people who for many different reasons, geographical reasons, reasons of experience and so on, find it very difficult to hear and respond to the message of God’s love in this world.  … I am sure that God’s love and mercy is not limited in that sort of way.

The life to come will be temporal, will include judgment, will include growth and continuing development coming into ever closer relationship with the infinite God. We will not simply arrive and enter a timeless and static creation of worship.

(33:18) But will everybody be there? that’s the next question I think we have to ask.  I’ already suggested that God’s offer of love and mercy is not for this lifetime only although we have to take it very seriously in this lifetime. But will there be people who will resist God’s invitation forever? While I think that God’s offer of acceptance is never withdrawn equally I think that nobody will be carried kicking and screaming against their will into the kingdom of heaven. I think there has to be in each of our lives a commitment making that journey. And will there be people who resist God forever? Well I don’t think we know really. But it is a serious possibility. And if there are such people, they are in hell. And they are in hell not because they’ve been thrown there by an angry God who’s just lost patience with them, but they are there because they’ve chosen to be there. That’s the tragedy of hell. As preachers like to say the gates of hell are locked on the inside to keep God out rather than on the inside to keep the sinners in. They’ve chosen to be there.

Polkinghorne here refers to and recommends CS Lewis’s The Great Divorce. In his opinion CS Lewis’s greatest gift was conveying theological truth in his imaginative writing.

Where will there be continuity or discontinuity? What will we do?

If you wish to contact me directly you may do so at rjs4mail@att.net